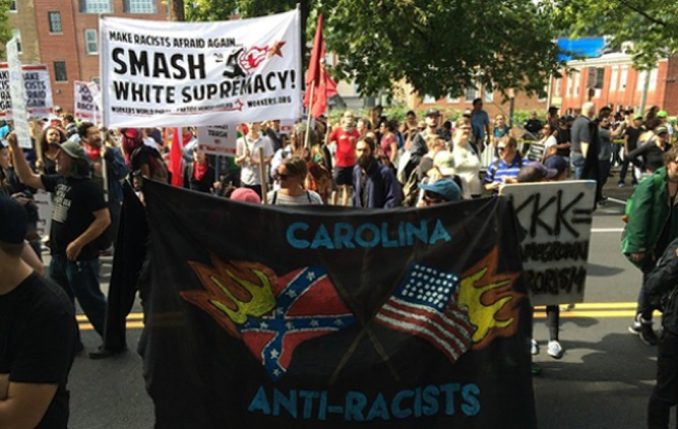 Workers World managing editor John Catalinotto interviewed WW correspondent Taryn Fivek, who was in the Workers World Party contingent at the counterprotest of the Nazi/Klan march on Charlottesville, Va., on Aug. 12.

Sent to scout ahead where people were forming up to march, my comrade Nate and I were consulting with a journalist we knew in the street. Suddenly there was a very loud noise, which I first thought was a bomb, followed by a lot of screaming. The noise turned out to be the sound of a car hitting bodies not more than 15 feet from us.

After the car hit the bodies, the Klansman put the car in reverse and you could see the car was totaled from hitting the bodies at high speed. He also slammed into two cars parked along the street, waiting to go. It seemed as though the people in those cars were also in shock. I saw someone comforting an elder, a Black woman, in one of the cars, like she might be having a heart attack.

I looked at the scene and tried to determine who might need help the most and ran to a woman, who later we found out was Heather Heyer, to try to keep people from moving her. I could see by the way her eyes were moving that she had suffered severe injury to her spine and head, and shouldn’t be moved.

Your judgment of time in moments like these is never accurate, but it seemed to me it took a long time for the paramedics to arrive.  I don’t think there were people there who were qualified to deal with that level of trauma. Heather, who was a 32-year-old paralegal worker and a staunch anti-racist from Charlottesville, died. Others were gravely injured.

The slow-moving emergency crews were just another example of what we in the anti-racist counterdemonstration were aware of: The state was out in force to protect the Klan and Nazis, not to save the anti-racist demonstrators.

Cops and Klan work together

The left outnumbered the Klan scum and Nazis in the streets. But we were also facing 1,500 cops and National Guard who were mobilized against us, not there for our protection. And there were heavily armed militia forces, looking like they were just back from Iraq, with automatic weapons, sidearms and hunting knives. They were on the same side as the police and the state.

We had to realize we’re not facing just the more extreme and unpopular figures like Jason Kessler or David Duke, and the Nazi-like characters who follow them, but we were facing the imperialist state. We need to overthrow the system. The system that incubates and helps these Klan terrorists flourish.

The anti-fascist forces in Charlottesville were diverse. Various Christian groups were involved, some clergy, as well as anarchists and people from a lot of different tendencies. A huge diversity of people were there, including from the African-American community. Local people, even those who were not in the streets with us, were supportive, honking their horns at us and our banners.

As far as I saw, we were the only revolutionary Marxist tendency there for the entire day. Other tendencies like the Democratic Socialists of America showed up in the afternoon, and some were in the streets near where the car struck.

Given the balance of forces, the crowd of our people, the militant left forces, acted in a defensive way the entire day — at least up until the murder. The Klan and Nazis, on the other hand, knew they could act with impunity. They knew they had the state backing them up.

During the day a dozen racists jumped on and beat a Black youth, Deandre Harris, with clubs and kicks, injuring him severely, without intervention from the police.

Our side knew we faced the hostility not only of the Klan and Nazis but also of the state. I admire the fact that everyone in the movement acted in a defensive way, confronting the racists where necessary but not recklessly.

After the car attack, however, the idea that the left would tolerate racist speech or behavior disappeared. People were furious, lost all fear and no longer held back.

A Klansman walked through the crowd, where people had blood on them, with a “Make America great again” hat on, and someone came out of nowhere and sucker-punched him. I saw Klansmen getting confederate flags torn out of their hands.

People didn’t care any more. They spit in the face of the racists and that scared the Klan. They were terrified. So the racists snuck into the parking garage and slipped out of town because they knew how angry the people were.

A lot of the Nazi-Klan program was shut down. I saw a video of a press conference, and what looked to be locally based white elders just shut it down. We know that decent people of all types will come out against the Klan and Nazis, but it’s important that these same good people make the connection between the Klan and the Nazis and the state that allows the racists to act with impunity.

We’re angry too at the ACLU (American Civil Liberties Union), which appeared in court to allow these Nazis to come into the street against the wishes of the local people. So it wound up that the cops were there to protect the Klan. They watched as the racists threw rocks, maced us, threw bricks at us and finally killed Heather. It was not just a question of abstract free speech.

The WWP contingent from three different branches — New York, Baltimore and Durham, N.C. — with many friends from other areas, including nearby Roanoke, Va., numbered at times 50 or more people, and acted in a coordinated way. Our political approach could be seen in the big, colorful banner, reading, “Make racists afraid again; Smash white supremacy!”  We were vibrant, loud, unashamed.

The contingent was courageous and multinational, youth and elders alike. That gave me — and I’m sure others, too — confidence and courage because of how we stuck together, had each other’s backs, made decisions after a democratic discussion and then followed the leadership.

That our tactics were coordinated turned out to be a really wise approach, especially when Nate and I were sent ahead. That’s when the car struck the people. There are no guarantees, but WWP does its best to plan its tactics as best as possible and not just do spontaneous actions. The decades of experience in street action is passed between the generations of WWP comrades. We make sure to do things intentionally and consciously.

Nate and I were in touch with the comrades responsible for our group. They asked us to come back to the delegation, so we left with them that night. It helped so much to be in the midst of our comrades’ solidarity.

Some in the WWP delegation from Durham stayed to make sure any of the anti-racists who might have been arrested were able to make bail. We feel this solidarity with all anti-fascist fighters.