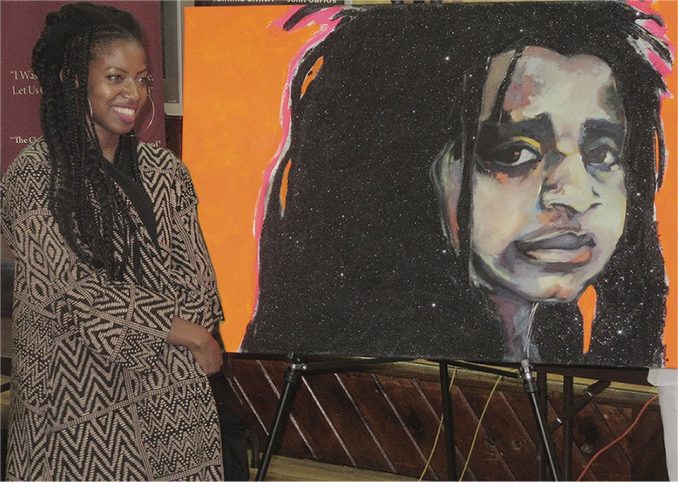 Artist Sophia Dawson stands with her painting of Janet Africa, one of the imprisoned MOVE 9.

Brooklyn, N.Y. — The MOVE 9 were honored on Aug. 5 at a Commemoration and Art Exhibit at Brooklyn’s House of the Lord Church. The very talented artist Sophia Dawson offered her paintings to be sold as fundraisers for these framed-up political prisoners.

The MOVE 9 have been incarcerated since Aug. 8, 1978, when police carried out a massive, violent attack on their Philadelphia home. Police shot bullets into the house and sprayed tear gas and 10,000 pounds of water pressure per minute from each of four fire hoses. Forced out of their home, the 9 were beaten and arrested. None was charged with having a weapon, but they were falsely charged, convicted and sentenced to inhumane, long prison terms, allegedly for killing a cop.

Incarcerated for 39 years, the MOVE 9 have consistently been denied parole since 2008. They have been deprived of their basic rights, including to their chosen diet and close access to family members. Two members of the MOVE 9, Phil Africa and Merle Africa, were killed by Pennsylvania’s brutal prison system.

The Philadelphia police are so hostile to MOVE members that on May 13, 1985, they dropped a bomb on the MOVE house, killing 11 people, including five children.

‘We will never give up!’

Organizer Orrie Lumumba chaired the Brooklyn rally and introduced the speakers to the large audience. Members of MOVE, International Concerned Family and Friends of Mumia Abu-Jamal, the Free Mumia Coalition and African-American community organizations from Brooklyn and elsewhere were on the program. They denounced racist attacks on the MOVE 9 and the horrific conditions of their imprisonment, and exposed the corruption and unfair practice of reactionary parole boards.

Political prisoners Mumia Abu-Jamal and Janine Africa, one of the MOVE 9, called into the event from prison. They spoke and answered audience members’ questions. Janine Africa told everyone, “We will never give up!” and “Keep the pressure on!”

The MOVE Organization asks supporters to sign a petition to pressure the U.S. Department of Justice into opening an investigation of the unjust imprisonment of the MOVE 9. It is critical that everyone stand up for them as they have stood for us all! See onamove.com and Justice for the MOVE 9 on Facebook.