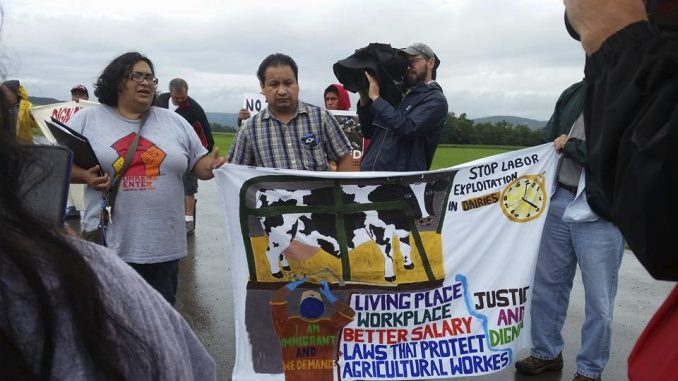 At Frazee Farms in Fabius, N.Y., Rebecca Fuentes and Fernando of the WCCNY, with other supporters and immigrant workers, protest wage theft and workplace abuse at dairy farms, July 27.

Scapegoating immigrants for the problems facing workers in the U.S. is not an invention of the Trump administration, although this bunch of lying and hypocritical politicians has taken it to a new low.

Beginning with the rise of labor unions in the late 19th century, the silk-suited moneymen blamed immigrants for creating chaos and bringing in “alien ideas” — like the right to join together and strike for higher wages and better conditions.

Immigrant bashing was then, and remains today, a trump card (no pun intended) in the deck of techniques to divide the working class and thereby enhance the profits of the very, very, very rich.

It was wars and repression in Europe that drove most migration to the U.S. then.

It is wars and repression in countries exploited by Western colonialism, neocolonialism and imperialism that make people risk their lives in order to migrate today.

Then, as now, many of those who fought hardest for the interests of the working class were immigrants.

One such person was Mary Harris “Mother” Jones. Born in Cork, Ireland, she devoted most of her life in the U.S. to building the labor movement, helping to organize coal miners for more than 30 years.

Harry Bridges, founder of the International Longshore and Warehouse Union in 1937, was born in Australia. His memory is alive today in the majority African-American ILWU Local 10, one of the most militant unions in the country.

Clara Lemlich, born in Czarist-oppressed Ukraine, became a leader of the “Uprising of the 20,000” by women garment workers in New York. Mostly Jewish and Italian immigrants, they organized the International Ladies Garment Workers Union and conducted a general strike against sweatshop conditions for three months over the winter of 1909-10.

There were, of course, many great leaders of the workers’ movement born in the U.S. But the bosses’ fury and racism against the “foreign-born” has been especially fierce. With ruling-class determination they unleash attacks against immigrants, African Americans, Indigenous peoples, Latinx workers and other people of color, attempting to halt the development of working-class solidarity.

Today, in many areas of the country, it is immigrant workers, especially from Mexico, Central America and the Caribbean, who are on the cutting edge of organizing the most oppressed. They may be confronting small business owners or farmers over working conditions, but their struggle is always in the context of a U.S. economy dominated by huge agribusiness and other corporations that then outsource many jobs. Big business sets the super-exploitative standards for low wages, harsh working conditions and hostility to unions.

Immigrant workers are breathing new life into the struggle to organize and lift up the most exploited. Some examples of their fierce daily fight for both survival and justice are in the following report from central New York state.

The Workers’ Center of Central New York, based in Syracuse, is building resistance to stepped-up attacks on immigrant workers in the region. The attacks include illegal arrests by police as well as wage theft, illegal paycheck deductions, and verbal and workplace violence by bosses.

A militant rally by the WCCNY on July 27 in the rural village of Fabius put Frazee Farms on notice that years of exploitation and workplace abuses toward immigrant workers must stop. The immediate spur to action was the firing of worker Fernando by the dairy farm owner — for being out sick for two days.

Without access to transportation, Fernando was not able to provide a doctor’s note to document his illness. Because bare-bones housing was provided by the farm — for a charge — Fernando was also on the brink of homelessness, when his last paycheck was “held” by the boss. Investigation by WCCNY exposed that the owner had been committing wage theft — ”robo de salario” — paying Fernando below minimum wage as well as making illegal deductions from his paycheck for uniforms.

WCCNY organizer Rebecca Fuentes explained that the center briefed Fernando on his rights and worked with him to develop a plan to claim his pay. Fuentes commented: “Fernando’s story also brings us to the need for agricultural workers to have places they can go to when they are unjustly and abruptly fired, for speaking up and asserting their rights or because they are sick or injured.” (WCCNY Facebook commentary)

Fuentes renewed a call for “sanctuary for all,” with a plea that “churches and organizations take action and open their doors now to immigrants fighting this unjust system.”

WCCNY held a rally in Penn Yan on Aug. 2, emphasizing the need for a safe place, caused by the constant hounding of immigrants under the Trump administration’s vicious attacks. Penn Yan, another small village, is surrounded by dairy farms, vineyards and apple orchards that employ migrant workers.

A small, determined crowd gathered at St. Mark’s Church in the town to protest the “polimigra” — the collaboration of local police, New York State Police, Immigration and Customs Enforcement with the Border Patrol to detain and deport immigrants. A state trooper had stopped a vehicle, ostensibly because the driver was not wearing a seatbelt on June 29 in Penn Yan, and then proceeded to arrest two occupants who were Latinx. He took them to a state police barracks and held them for immigration officers to assume custody. Both passengers are now facing deportation.

The trooper acted in violation of a New York State 2014 executive memorandum that offers some protection to immigrants, forbidding troopers from asking for identification documents from passengers in cars they stop.

In the Facebook announcement for the action, “Solidarity With Families Affected by Polimigra,” organizers emphasized: “This incident is just one example of how a single decision made by one law enforcement agent can separate a family, deport a dedicated worker, and send a chilling effect to the entire immigrant community.”

Local immigrant worker-organizers have been threatened with deportation. The WCCNY is currently campaigning to keep WCCNY board member Dolores Bustamente with her community. Bustament has worked in many upstate New York apple orchards and is also on the board of Alianza de Mujeres Campesinas.

In a historic legal challenge, a key member of WCCNY, Crispin Hernández, is the lead plaintiff in a lawsuit to end the exclusion of farmworkers from the protected right to organize in New York state. Supporters packed an Albany courtroom on July 27 to hear opening arguments in the case.