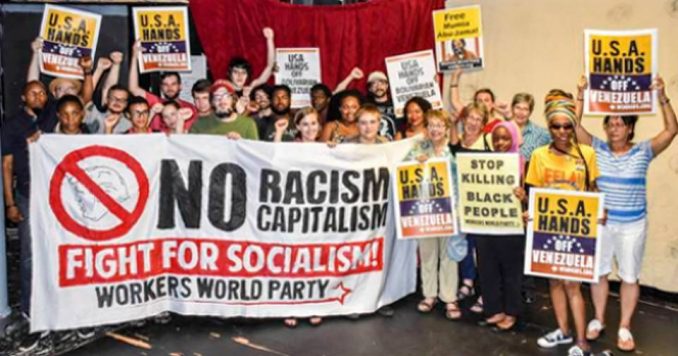 Some of the new candidates who attended the Marxism School.

Philadelphia — Since the beginning of 2017, Workers World Party has seen significant growth across the organization. What is unique about joining WWP is that these new members are joining a cadre organization that focuses on membership development.

The party spends a significant amount of time training and developing new leaders through a candidacy process that involves intensive focus on theory and practice, including organizing and activist work, all the while bolstering theoretical training in revolutionary ideology identified with the names of Karl Marx and V.I. Lenin — Marxism-Leninism — and other revolutionary fighters and theoreticians from Asia, Africa, Europe and the Western Hemisphere.

On July 23-24, some 45 new candidates and members from Baltimore, Boston, New York, Philadelphia and Washington, D.C., met for a weekend in the Philadelphia branch office for a series of classes, workshops and discussions.

Topics included LGBTQ and women’s oppression; WWP’s orientation to national liberation struggles; the Marxist conception of the state as a tool of capitalist repression and oppression; writing for Workers World newspaper; using social media; the Global Class War tendency and the party’s approach to opposing U.S. imperialism; Black Reconstruction and the contributions of W.E.B. DuBois; and some WWP history, including its support for the Attica Rebellion and its resistance within the military to the Vietnam War.

Christa Rivers, a candidate for WWP, reflected on the importance of the weekend: “It is important to study Marxism because it has provided essential analyses of the ways in which capitalism has wreaked havoc on the earth by polluting it through endless war; has wreaked havoc on our families, communities, and peoples by creating divisions — borders, classes, races — to keep us from uniting against this death machine; has destroyed cultures, decimated populations and created a system that entirely relies upon the exploitation of the many by the few.

“Marxism has also given us hope: Capitalism will be defeated by socialism, which will then be followed by communism. Only through these economic systems can we achieve true liberation. Socialism and communism put the collective needs of the people first.”

One of the major focuses of the weekend was countering the efforts by U.S. imperialism to turn back the gains of the Bolivarian Revolution in Venezuela. Candidates studied the gains of the anti-imperialist, pro-socialist Bolivarian Revolution and discussed ways to build solidarity with the movement there as an essential part of being a revolutionary party in the center of imperialism.

In a class on National Oppression, new members discussed such current terms as “identity politics” and raised up the importance of understanding the complexities and connections of various forms of oppression, such as ableism, racism, sexism, ageism, anti-LGBTQ oppression and more. The class discussed how special focus on these oppressions is revolutionary and necessary, while labeling struggles against oppression as merely “identity politics” is reactionary. Not only is it harmful to the oppressed, but it holds back the potential for revolutionary solidarity.

As WWP continues to grow as a multigenerational, multinational, multigender combat party, political education and practical development of party cadre will increasingly become a focus of the organization.