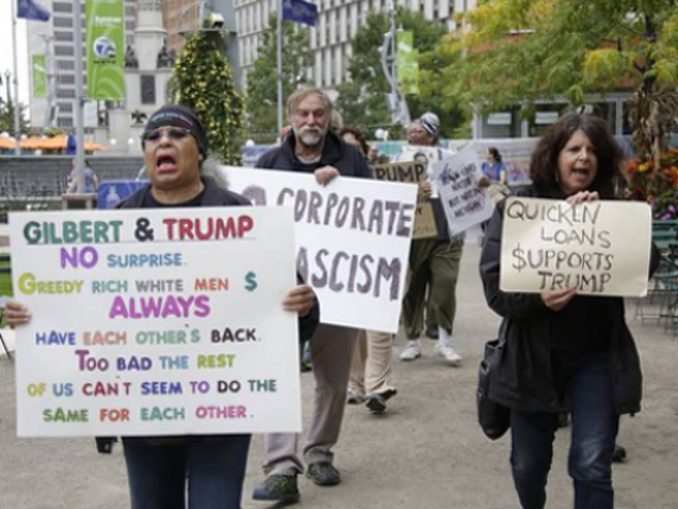 Billionaire Dan Gilbert and his company, Quicken Loans, are hailed across the U.S. as the “saviors” of Detroit. However, a recent court case exposed their role in racist, predatory lending that destroyed Detroit’s neighborhoods with 65,000 mortgage foreclosures from 2005 to 2009, and the tens of thousands of property tax foreclosures that ensued.

These predatory practices, of which Quicken is one of many perpetrators, led to 56 percent of Detroit mortgage-foreclosed homes between 2005 and 2014 becoming blighted, demolished or foreclosed for nonpayment of taxes. (Detroit News special report, June 2015, goo.gl/A8oJgd)

In July, a federal court ruled in favor of West Virginia plaintiffs suing Quicken Loans in a class-action lawsuit for inflating property values by fabricating “owner estimated” home values to appraisers. The court gave Quicken an $11 million fine and called Quicken’s actions “unconscionable” and “truly egregious.” Attorneys for the plaintiffs have said that Quicken’s practices in the case were consistent across the country. By Quicken artificially inflating home values without carrying out a true appraisal, homeowners were subjected to foreclosure when their mortgage payments were adjusted upward and they could not refinance their fraudulent subprime loans. (metrotimes.com, July 26)

Gilbert insists that Quicken is “one of the good guys” and denies liability for the company’s predatory practices. In fact, Quicken directly carried out 1,058 foreclosures in Detroit, 52 percent of which were on subprime loans. (Subprime loans have interest rates at least 3 percent above the prime rate.)

But that only tells part of the story. From 2003 to 2008, Quicken Loans approved subprime mortgage loans, sold them immediately to banks Fannie Mae or Freddie Mac, and faced no consequences when an estimated 70.6 percent were foreclosed within 24 to 36 months of originating. (Mortgage Fraud Investigations Miami, Feb. 2015) This practice, done by mortgage companies everywhere, was one of the biggest causes of the 2008 housing crash.

The subprime loans based on inflated appraisals that Quicken originated also led to the highest number of property tax foreclosures in the city of Detroit since the Great Depression. Between 55 percent and 85 percent of these foreclosures were done at a rate higher than the 50 percent market-value limit set out in Michigan’s Constitution. (illegalforeclosures.org)

Since Gilbert and others caused so many homes to be blighted, the Obama administration in 2013 convened the Detroit Blight Removal Task Force, funded primarily with hundreds of millions of dollars in federal Hardest Hit Funds originally intended to keep families in their homes. Detroit Mayor Mike Duggan appointed none other than Dan Gilbert as a chairperson of the task force.

The Duggan and Gilbert collusion goes deeper than letting Gilbert be the one to develop the homes that he helped blight. If the Gilbert empire isn’t destroying homes through the blight task force, they are buying up unconstitutionally foreclosed homes for pocket change through auctions. People who have been foreclosed are barred from participating in these auctions.

On July 21, Bedrock, one of the main companies of the Gilbert empire, revealed a racist Freudian slip when they put up a mural on a downtown building declaring “See Detroit Like We Do” and depicting only white people.