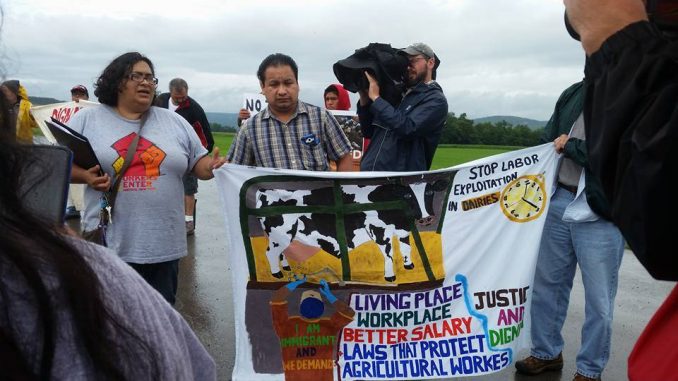 The Workers’ Center of Central New York is continuing to build resistance to stepped-up attacks on immigrant workers in the region. The attacks include illegal arrests by police as well as wage theft, illegal paycheck deductions, and verbal and workplace violence by bosses.

On July 27, the WC-CNY’s militant rally in the rural village of Fabius, N.Y., put Frazee Farms on notice that years of exploitation and workplace abuses toward immigrant workers must stop. The immediate spur to action was the firing of worker Fernando by the dairy farm owner — for being out sick for two days.

Without access to transportation, Fernando was not able to provide a doctor’s note to document his illness. Because bare-bones housing was provided by the farm — for a charge — Fernando was also on the brink of homelessness, while his last paycheck was “held” by the boss. Investigation by WC-CNY exposed that the owner had been committing wage theft — ”robo de salario” — paying Fernando below minimum wage as well as making illegal deductions for uniforms from his paycheck.

WC-CNY staff member Rebecca Fuentes explained that the Center briefed Fernando on his rights and worked with him to develop a plan to claim his pay. Fuentes also commented: “Fernando’s story also brings us to the need for agricultural workers of places they can go when they are unjustly and abruptly fired, for speaking up and asserting their rights or because they are sick or injured.” (WC-CNY Facebook commentary) 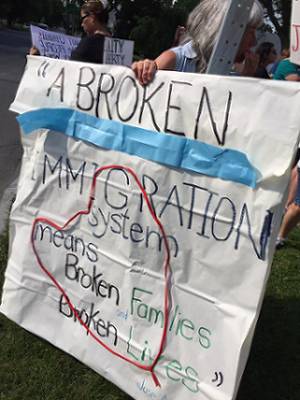 Fuentes renewed a call for “sanctuary for all” with a plea that “churches and organizations take action and open their doors now to immigrants fighting this unjust system.”

WC-CNY’s rally in Penn Yan, N.Y., on August 2 emphasized this need for safety because of the constant hounding of immigrants under the Trump administration’s vicious attacks. Penn Yan, another small farm village, is surrounded by dairy farms, vineyards and apple orchards where migrant workers are employed.

A small, determined crowd gathered at St. Mark’s Church in the town to protest the “polimigra,” the collaboration of local police, New York state troopers, Immigration and Customs Enforcement and the Border Patrol to detain and deport immigrants. On June 29 in Penn Yan, a state trooper stopped a vehicle, ostensibly because the driver was not wearing a seatbelt, and then proceeded to arrest two occupants who were Latinx. He took them to a state police barracks and held them for immigration officers to assume custody. Both passengers are now facing deportation.

The trooper acted in violation of a New York state 2014 executive memorandum that offers some protection to immigrants by forbidding troopers from asking for identification documents from passengers in cars they stop. At the Aug. 2 rally, organizer Nikeeta Slade said: “Charged and tasked with enforcing the law, [the troopers] are operating outside the law. If any other community member had committed a flagrant violation of the law, they would be thrown under the jail. We need to hold these officers accountable.” (WC-CNY Facebook video, Aug. 2)

In the WC-CNY Facebook announcement for the action, “Solidarity With Families Affected by Polimigra,” organizers also emphasized: “This incident is just one example of how a single decision made by a one law enforcement agent can separate a family, deport a dedicated worker, and send a chilling effect to the entire immigrant community.”

The Workers’ Center-CNY is defending individual workers against deportation, including Dolores Bustamente, who has worked in many Upstate New York apple orchards. She is on the board of Alianza de Mujeres Campesinas and the WC-CNY.

In a historic legal challenge, a key member of WC-CNY, Crispin Hernández, is the lead plaintiff in a lawsuit to end the exclusion of farmworkers from the protected right to organize in New York state. On July 27, supporters packed an Albany courtroom to hear opening arguments in the case.

In June, the WC-CNY released “Milked: Immigrant Dairy Farmworkers in New York State,” with in-depth interviews with 88 dairy workers who expose their dangerous and degrading workplace and living conditions. Read the full report at milkedny.org