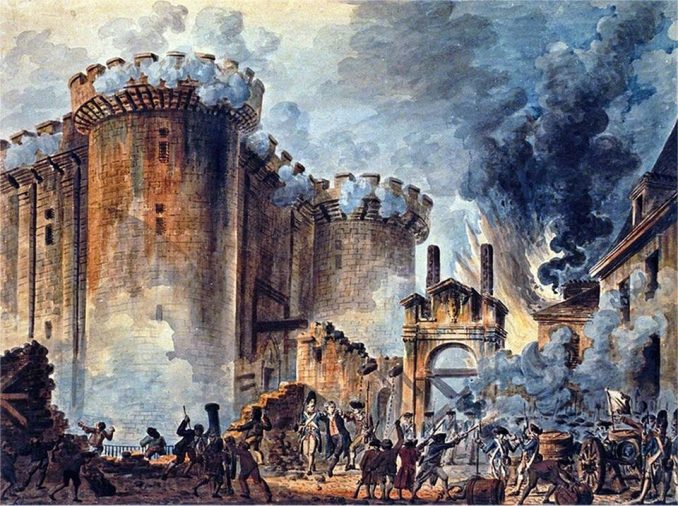 Tearing down the Bastille prison.

France will be celebrating its 228th Bastille Day on July 14. This event commemorates the seizure of that notorious political prison by Parisian workers, a major event that led to toppling the Ancien Régime under King Louis XVI and the establishment of the first revolutionary European republic.

The new French President Emmanuel Macron should take the day to reflect on his country’s radical heritage and put some serious thought into his projected “reforms.”

But actual voters in France didn’t seem interested. While Macron does have the parliamentary support to back his policies, what’s not being discussed in depth is that this “victory” was won in an atmosphere of apathy.

Macron and En Marche! won their “mandate” with the lowest voter turnouts in over 30 years. Despite assurances from imperialist media that Le Pen was no more, she still won 33 percent of the presidential vote, almost double that of her more openly racist and anti-Semitic father in his 2002 run. Le Pen also won six more seats in the National Assembly, an increase from two to eight. Front National may be down, but it is unlikely to be out, especially if Macron keeps his neoliberal promises.

Macron was sold as an outsider by the pro-neoliberal global media. But even a fleeting glance at his record shows this is a ridiculous notion. The En Marche! Party may be just over a year old, but Macron isn’t an unknown who suddenly appeared and swept the people of France off their feet.

Prior to entering public life, Macron was hard at work in the chambers of the powerful Rothschild & Cie Banque. Not one of the world’s largest banks, and certainly red meat for conspiracy-prone supporters of fascists like Le Pen, the bank is still proof of Macron’s close ties to the world of global capital. Macron left the bank in 2008, but not for any altruistic reason. Instead his knowledge of the finance sector helped him in his new position as finance minister under French President François Hollande.

President Hollande was a member of France’s Socialist Party, but the “socialist” label is certainly not accurate for this neoliberal-oriented political party. Upon his election in 2012, Hollande consistently proved to be an enemy of the working class, including his compliance with European Union austerity requirements issued by Brussels.

Hollande initially promised to reduce the ratio of France’s borrowing to its gross domestic product by increasing taxes on businesses, primarily large corporations. But by the time Macron was appointed finance minister in 2014, the new austerity plan included making widespread cuts to public programs, from state and local budgets of the previously robust social security system.

The damaging policies that Minister Macron helped enact under Hollande were the groundwork for President Macron’s future plans.

Macron has plans that are familiar to anyone who understands the usual strategy of neoliberal technocrats: the government staying true to the ideas of “economic growth” by catering to corporations from the technology and financial sectors.

But that enticement will play out as subsidies and favoritism toward the most wealthy, perhaps even banks fleeing post-Brexit Britain after causing that country’s 2008 economic collapse and forcing austerity there as well.

This grand scheme will be occurring as Macron tries to implement plans to gut French spending for social programs that keep even the bourgeoisie safe. The new government has promised to further cut welfare programs and to change the labor laws to reduce unions and workers’ negotiation power to the level of the individual. Macron has also pledged to cut unemployment — while firing 120,000 government employees.

If Macron does go through with this neoliberal blueprint, he should remember one key point: The people of France, especially in Paris, don’t take attacks like these lying down.

Macron’s victory was far from the media’s portrayal of a “mandate” by the people. There are other new voices demanding real change, including the left La France Insoumise party, which won 17 seats in the National Assembly, more than twice the eight seats the far-right Front National’s won.

While the new, true socialist voice isn’t enough by itself to counter the presidential agenda, there is another force that is a reliable source of resistance: the French workers.

The people will likely turn out to be Macron’s greatest opposition. This is the lesson that should be drawn from the popular uprising by the citizens of Paris and their victory at the Bastille on July 14, 1789. From that day forward, the French people have lived in a continuous cycle of revolutions that changed their country. From the First Republic of 1792, the July Revolution of 1830, the Paris Commune of 1871 through resistance to Nazi occupation during World War II, the French people have let the ruling class know when they’ve had enough.

Three examples have happened in just the past decade and a half. First, under Macron’s old boss Hollande, Paris was set ablaze last year by uprisings that followed months of mass protests over proposed neoliberal changes in the labor laws, leading to a strike by French transportation workers.

Second, a series of militant uprisings have occurred in the suburbs of Paris where people suffer rampant unemployment and live in desperate poverty, while extreme racism, vile Islamophobia and police brutality target residents, many of them immigrants, from countries formerly colonized by France.

Third, in 2003 the people of France participated in one of the largest global mobilizations against the U.S. invasion of Iraq. Where did the estimated 200,000 marching in Paris end this iconic act of global solidarity against imperialist war? At the site of the Bastille, of course.