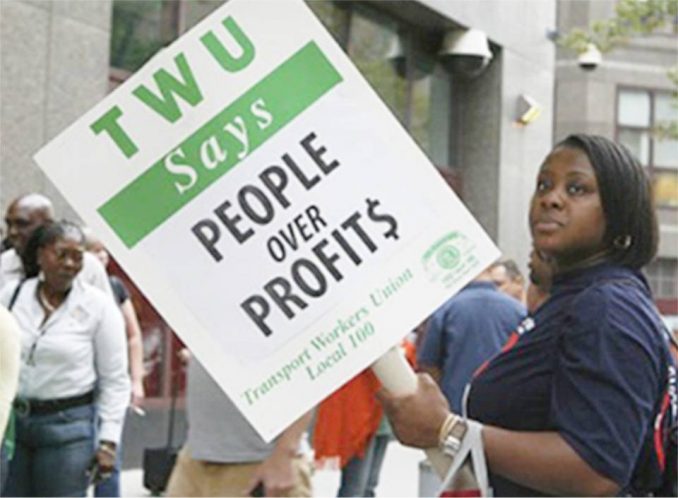 The state of this city’s Metropolitan Transportation Authority in 2017 is criminal. Even as new subway stations are built in wealthy neighborhoods like Hudson Yards, a train derails in Harlem. While MTA executives spend money on WiFi, cell carrier services and flashing billboards doubling as maps, modernizing the signal system is put on the backburner.

This has led to historic delays and the injury and deaths of MTA workers from Transit Workers Union Local 100, who courageously work to keep the system moving safely. Thirteen transit workers have died on the job since 2001, including construction flagger Louis Gray just last year.

In recent weeks, the riding public has been confronted with videos on social media that highlight the decay of the transit system: water pouring into train cars and onto subway tracks; commuters trying to claw their way out of a train that had been trapped underground with no lighting or air conditioning for over an hour. Many lines experienced delays and some saw total shutdowns due to derailments and other issues during the last week of June.

Who or what is behind the decisions that result in the degradation of our transit system? The argument favored in the media is that it’s the MTA workers. But it’s the workers themselves who risk injury and death in these conditions. In truth, these decisions are determined by the bankers who control the MTA, who care about profit over people, and whom we cannot expect to fix this crisis in public transport.

New Yorkers need transit justice: safe, reliable, accessible, free public transit and safe, well-paying working conditions for the tens of thousands who do the work. To get all these things, we need to fight for them, and ultimately for socialism. Unless there’s a struggle, the capitalists will let the already deadly transit system continue to decay, will continue to underserve poor communities of color and people with disabilities, and funnel money into police terror and luxury developments. The only way we have a chance is by fighting this rotten system that is designed only to extract the maximum amount of profit from the working class and oppressed.

Banks and the MTA

The MTA, which includes buses, subways and trains serving 12 counties in the New York metropolitan area, is a ­“public- benefit” corporation funded by bonds held by the richest banks in the world. The primary function of the MTA is not to help 11 million people commute every day; it is to help these bond-holding banks turn a profit. And they do so to the tune of $1 billion every year through tax-free interest that the MTA pays on these bonds.

The banks love these bonds because they are government secured. Regardless of whether the MTA has made enough money to pay back the bonds, the government will step in to pay back the banks. This may mean cuts to other government-funded services or hikes in fare prices. Whatever it takes to pay the banks. And so the banks see the MTA as a safe haven for their money, at a time when the economy is in crisis and profitable investment is hard to come by.

Meanwhile, the MTA’s budget falls short by $15 billion of the amount needed to undertake critical infrastructure improvements. The MTA’s only option to close this gap is by raising fare prices to pay off the money they will need to borrow from banks to cover costs. The MTA’s fiscal arrangement with the 1% means that any improvements needed to the system will come right out of the pockets of the people who use the lines and keep New York’s economy going. This has resulted in the fare going up 55 times since 1948, when that fare was just 51 cents in today’s money.

Make no mistake, if the transit system stops operating, then the profit-making machine grinds to a halt. This is why immediately after Hurricane Sandy, Brooklyn residents were packed into crowded buses that sent them over bridges into Manhattan as MTA workers plugged in extra days and hours, working tirelessly to pump water out of the tunnels, including Amtrak’s, to bring the system back to life. Meanwhile, residents in Red Hook went for weeks without electricity, heat and running water.

The last transit workers’ strike in 2005 was ended in less than two days by city concessions. Workers hung up “Closed” signs in front of stations on Dec. 20 and the retail stores could not bear a slowdown at the height of the holiday shopping season. Of course, the ruling class didn’t make these concessions without first attacking the workers with court injunctions and racist harassment. During the strike, billionaire Mayor Michael Bloomberg called TWU Local 100 President Roger Toussaint and the transit workers — who are predominantly Black and Brown — “thugs.”

Public infrastructure and transit have been on the agenda of every politician running for mayor of New York since time immemorial, but it’s only when labor action and people power come knocking that the ruling class seems finally willing to listen to our demands.

The capitalist media express concern for the MTA — because the decaying system is hurting business. They cite examples of empty offices and workers late to important business meetings or to opening stores and restaurants. This is the only reason the bourgeoisie would have to intervene. They would be happy to lower conditions to just above open revolt because that’s how they would achieve the maximum profit.

Straphangers in New York can get a monthly pass for $121. But most workers can’t scrape up the dough for a 30-day Metrocard that can be lost. New Yorkers getting an $11/hour minimum wage would have to spend 11 hours of their monthly pay just to get to and from work.

The ruling class would rather let private corporations like Uber, Lyft and the new privatized ferry service fill gaps for the largely white, gentrifying professional class in New York. People of color, the poor and the working class will continue to pay $2.75 per trip for trains that are overcrowded, delayed or derailed, are heavily occupied by the NYPD, smell like piss and lack accessibility for people with disabilities in most stations across the five boroughs. The transit workers themselves will be forced to continue to work in dangerous and undignified conditions.

The ruling class does not care about whether the rider is in a wheelchair, speaks another language or lives in poorer neighborhoods far from train lines. Those who cannot easily use the stairs are forced to bear the stench, standing air and snaillike slowness of ancient elevators or are confronted with broken escalators. Black and Brown people living in neighborhoods like East Flatbush are expected to take notoriously overcrowded and sporadic buses to some of the most cop-infested and filthiest stations in Brooklyn. Those with disabilities must deal with an understaffed and poorly stocked Access-A-Ride system that is a regular nightmare to depend on.

When the state and the city of New York do actually allocate resources for issues of public transit, it’s to continue waging war on Black and Brown people here at home. It’s typical to see more cops at a train station than MTA workers, who are understaffed, overworked and mainly alone in their booths.

Before arriving on a rat-infested, reeking platform to board a late train that may derail or flood, riders will need to dodge the largest police force in the United States. Killer cops camp out behind turnstiles and at platform entrances to terrorize, harass and kidnap Black and Brown people, search bags and flag undocumented people for deportation.

These violent enforcers of the state are not transit workers, and have no solidarity with the mainly Black, Brown and migrant workforce underground. This was perfectly illustrated when cops framed up 54-year-old Darryl Goodwin, a Black MTA worker and member of TWU Local 100, because he allegedly was not able to move fast enough when they barked orders to let them chase a teenager accused of shoplifting into the subway system. It did not matter to these cops that Darryl Goodwin was a 27-year veteran of the MTA, a union member in good standing. It did not matter to them that he was overworked and underpaid. They slapped handcuffs on him and took him to jail because their mandate at that station was not to protect riders and workers, but to terrorize the working class and oppressed.

New Yorkers will need to look elsewhere for solutions to what has become an increasingly miserable and deadly public transit experience.

Another world is possible

Last year, China announced that it would spend $724 billion on transit infrastructure over the next three years. After the 2008 economic crisis, instead of approaching recovery with massive handouts to banks, as did the U.S., China decided to invest hundreds of billions into public transit. The daily ridership of the Beijing Metro went from 1.7 million to 9.9 million over the next 10 years. Instead of being greeted with killer cops, rats, dripping ceilings and late trains, straphangers enjoy state-of-the-art rollingstock, platform doors and other technologies that raise their quality of life. Fares are distance-based, and range between 44 cents for a short ride to only $1.50 to travel up to 70 miles on the system.

In Moscow, the Metro system was built by socialist labor in the 1930s. Many Muscovites volunteered their Saturdays to help put a working-class stamp on the most gorgeous system in the world, with marble, artwork and exquisite lighting making a worker’s commute a pleasure cruise instead of a nightmare like it is in New York. Even after the collapse of the Soviet Union, the stations are still staffed by dozens of workers whose job is to provide assistance, clean the platforms and run the kiosks for purchasing tickets that range between 83 cents and $1, with 30-day passes costing straphangers a little over $30.

To say it is impossible to have a mass transit system that is free, clean, safe and reliable is to restrict our imaginations to a system that has made moving around New York a great challenge.

This dismal situation, however, is not new. Public transportation in the United States, throughout the entirety of its existence, has been stained with the blood of the working class and the oppressed — exactly because the history of the United States, including its infrastructure development, has been one of genocidal racist capitalism. The class composition of those who work the transit system — from those who dug the first tunnels to those who now clean the stations — has not changed. It’s Black and Brown people, migrants and poor whites — the same people who primarily use the system.

We can expect things to improve only if we organize and fight. Even poorer countries have built terrific mass transit systems under socialism. We must fight for a transit system that makes possible the safety and dignity of everyone who uses the trains and buses — the public and the workers. “From the A to the Z, public transit should be free,” as Transport Workers Union founder Mike Quill once demanded.