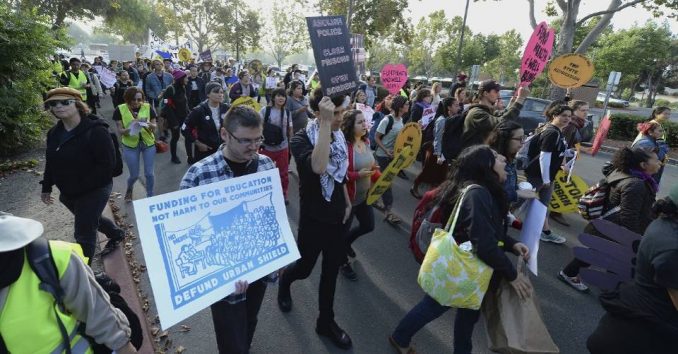 Hayward, Calif. — Hundreds of people, the vast majority opposed to Alameda County Sheriff Gregory Ahern’s policies on undocumented immigrants, packed a town hall meeting here on June 30 at which the sheriff was the featured speaker. Held at the Hayward Adult School, far from Bay Area city centers, the event was organized by People Power-Alameda County, a community action group of the American Civil Liberties Union.

Mass challenged the sheriff’s assertion that he was required to cooperate with Immigration and Customs Enforcement. She pointed out that San Francisco and Santa Clara counties don’t inform ICE as to the documentation status of their inmates. “All the federal statutes say is that an office or entity can’t prevent other people from voluntarily providing notice about citizenship and immigrant status,” she said, adding, “Nowhere in it does it say that the sheriff’s office has to tell ICE when people are being released.”

Ahern’s response was very revealing. He said he had to cooperate or he could lose his federal grants. Ahern has received significant federal money for his pet Urban Shield weapons and militarization training program, and recently for a major expansion of his Santa Rita jail facility. These projects have been heavily criticized and protested against by activists in the Bay Area.

In response to charges that he reports people to ICE before they’ve even been convicted of anything — violating the principle of “innocent until proven guilty” — Ahern came back with this Trump-style statement: “I believe that people who are ‘evil’ and committing violent crimes should go before a deportation hearing.” He even talked about possible crimes people may have committed in their native countries, ignoring the fact that many immigrants come here as refugees from persecution by violent governments installed by the U.S. as part of imperialism’s drive to control all of Latin America.

More than 100 people lined up at the mic to speak and most lambasted the sheriff over his immigration policies. One quoted from a meeting on April 20, 2016, at which Ahern stated he could tell who is “suspicious” and who is undocumented based on their “clothing, luggage and language” — in other words, racial profiling.

Another brought up an incident in May when Ahern’s deputies profiled and criminalized a street fruit vendor in San Lorenzo. A sergeant named Kelly was quoted as saying, “If you don’t enforce this type of selling, it will begin to look like a Third World fruit market.”

It was also pointed out that Ahern, in his role as chair of the California Sheriff’s Association Political Action Committee, endorsed arch-racist Jeff Sessions’ nomination for U.S. attorney general.

Ahern stated several times that he would continue to invite ICE into the Santa Rita jail and share prisoner release dates with the agency.