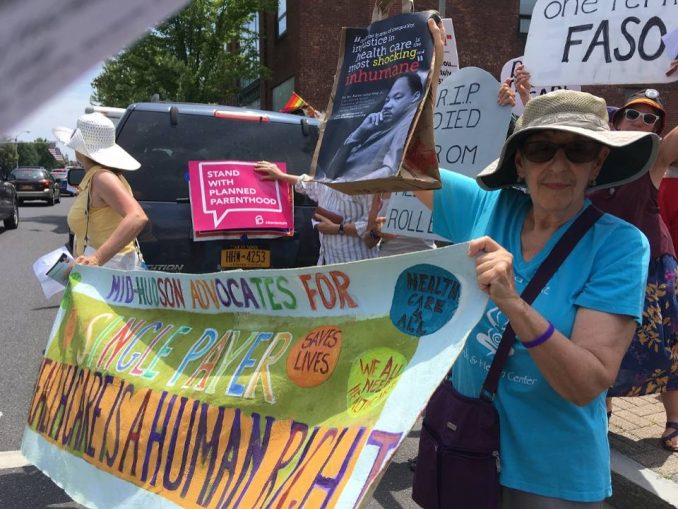 According to estimates from the Congressional Budget Office, the bill discussed in the Senate would slash Medicaid funding over the next 10 years by $772 billion, while cutting taxes on the rich and superrich by $541 billion.

It would also remove 22 million people from insurance coverage, increase deductibles and raise costs for the elderly and those with illnesses or disabilities.

For many people this is an existential threat. Cuts to Medicaid imperil programs that care for millions of people suffering from opioid addiction. The bill also threatens widespread care for poor women by defunding Planned Parenthood and most of the home care needed by elderly people and people with disabilities.

In a survey of opinion polls taken toward the end of June, as few as 12 percent to 18 percent supported the Senate bill, while 52 percent to 60 percent were against it, with the rest undecided. (CNBC June 28)

People with disabilities, who would lose enormous support by cuts in Medicaid, continued to lead direct actions that confronted Congress. On June 28, after two days of sitting in at the Denver office of Republican Sen. Cory Gardner, 10 people were arrested, many of them people with disabilities. The demonstrators chanted they would “rather go to jail than die without Medicaid,” according to CNN.

Days earlier, after holding a die-in at Senate Majority Leader Mitch McConnell’s office, people with disabilities from the organization ADAPT were arrested for their protest of the attacks on Medicaid. (Workers World, June 29)

Along with these direct actions, many of the organizations that oppose the Trump administration for a raft of reasons participated in meetings with members of Congress to argue against cuts to Medicaid and the ACA or held protests outside their offices.

The hundreds of protests were not limited to big cities. Many of them, like the one in Kingston, N.Y., on June 30 outside Republican Rep. John Faso’s office, raised the slogan of “Medicare for all.”

This slogan is a call for a single-payer or national medical insurance for everyone, similar to that provided in Canada and many Western European countries. Medicare now covers 57 million people in the U.S., including those aged 65 and over, plus 9 million people with disabilities.