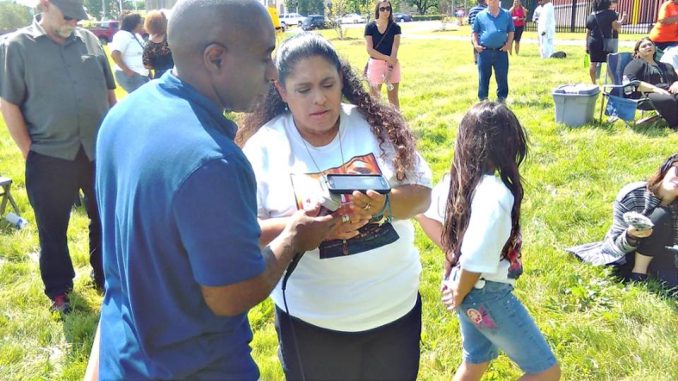 June 18, in Detroit, organizing against ‘cruel and unusual punishment’ of young people imprisoned for life.

A group of at least 80 protesters rallied in Erma Henderson Park in Detroit on Father’s Day, June 18, to show their disgust that the state of Michigan has yet to re-examine most of its cases of juvenile incarceration for life without chance of parole.

Back in 2012, the U.S. Supreme Court decided that such punishments were cruel and unusual, save for extreme cases where there was no possibility of rehabilitation. In 2016, the court made their decision retroactive so that anyone sentenced before the ruling should have their case re-evaluated.

Michigan currently has 363 people who were im­prisoned as juveniles and who are serving life sentences without parole, most of whom have not had their sentences re-examined. Michigan ranks second in the nation for the most juveniles sentenced to life without parole.

At the protest were about a dozen individ­uals who had been previously imprisoned, including two who had been sentenced to life without parole. They were able to attend because they were granted releases after the state re-examined their cases.

Family members of those unfairly incarcerated and those formerly imprisoned, as well as activists from the area, attended the protest. Members of Amnesty International, activists involved in fighting the legislation, and many people personally affected by this injustice addressed the protest.

Efrén Paredes Jr., who is still serving a life sentence, called in to the event. His voice, broadcast for everyone to hear, told what the struggle is like on the inside.

In 1989, Paredes was incarcerated for life without the chance of parole at the age of 15. Paredes paired with Elena Herrada, a professor at Marygrove College and Wayne County Community College who is engaged in the fight for criminal justice reform, to organize the event. They also created an online petition demanding passage of state prison reform that would impact every prisoner in Michigan. The link to the “Support Michigan Prison Reform” petition is tinyurl.com/mipr2017/.

Among the demands are relief for prisoners serving life and long indeterminate sentences, and ending mandatory minimum sentencing and incarceration for victims of abuse who defend themselves. Other important issues include stopping predatory prices on phone calls home.