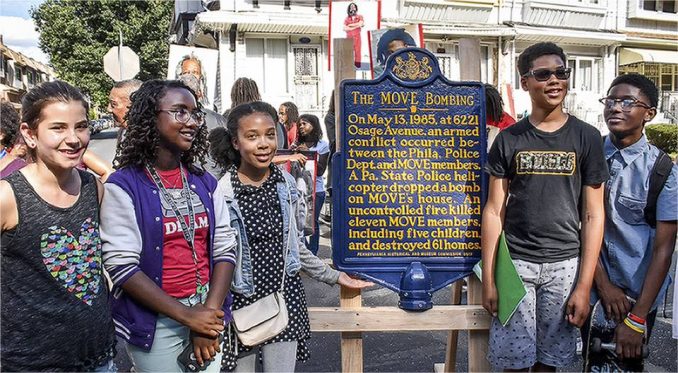 Philadelphia — Due to the hard work and dedication of middle school students from the Jubilee School here, there is finally a historic marker on Osage Avenue and Cobbs Creek Parkway in remembrance of the 11 MOVE members, including five children, who died in a purposely uncontrolled fire on May 13, 1985.

A very moving ceremony was held June 24 to unveil the marker, which will serve as a permanent reminder of the murder of the MOVE members. In 1985, Philadelphia officials, including the mayor, police commissioner and fire commissioner, ordered a bomb dropped on MOVE’s West Philadelphia row home. In addition to the deaths, the resulting fire also destroyed the entire two-block area.

The Jubilee students described the attack on MOVE as “one of the worst cases of police brutality in America.”

Speaking as a collective voice, five Jubilee students described how the marker project began as part of a field trip to the area on May 13, 2016.

The students went to Osage Avenue to commemorate the MOVE bombing and to witness the impact first hand, including the poorly rebuilt houses, many now uninhabitable. The trip’s goal was to uncover why the city wouldn’t acknowledge what the police did in the Philadelphia Black community over 32 years ago. During this visit, they noticed there was no marker, applied for it and started raising funds.

Students repeatedly asked why those responsible for the murderous assault were never held accountable. They said this failure helped pave the way for the current epidemic of police brutality.

The marker unveiling was part of a campaign called “Songs of the Children Movement: A Campaign against Police Violence,” which was begun in 2015 by Jubilee students to speak out against social injustices. The students chose this title because they wanted to use poetry as a “message builder.”

The young students also led three marches of hundreds of children to confront police brutality and to abolish the city’s “Stand Your Ground” and “Stop and Frisk” laws.  On March 18, 2016, they held a silent march with drums, inspired by W.E.B. Du Bois’s march against lynching in the early 1900s.

Several of the remaining Osage Avenue residents supported the students’ efforts and attended the June 24 unveiling. Ramona Africa, the sole surviving MOVE member to escape the fire, spoke publicly at the site for the first time since 1985.

Over 150 people came to the unveiling, with speakers including renowned Philadelphia poet Sonia Sanchez. Young MOVE members attended, carrying large pictures of nine MOVE members imprisoned since 1978 as the result of an earlier Philadelphia attack on the group. Several were grandchildren of MOVE members killed in the 1985 fire.

In their year-long campaign, the students stood their ground and eventually won out against efforts of the historical commission to include wording that would imply there was “a gun battle” at the site instead of an overwhelming attack by 100 police with water cannons, tear gas and heavy machine gun fire.

City officials claimed the group had not filed paperwork needed to place the marker on the public parkway. This delayed the marker’s placement. Jubilee School principal Karen Falcon, who said that the students submitted all necessary paperwork, stated, “It still feels like the city isn’t fully owning up to it in some sense.” (billypenn.com, June 23)

The final wording on the marker reads: “The MOVE Bombing — On May 13, 1985, at 6221 Osage Avenue, an armed conflict occurred between the Phila. Police Dept. and MOVE members. A PA State Police helicopter dropped a bomb on MOVE’s house. An uncontrolled fire killed eleven MOVE members, including five children, and destroyed 61 homes.”