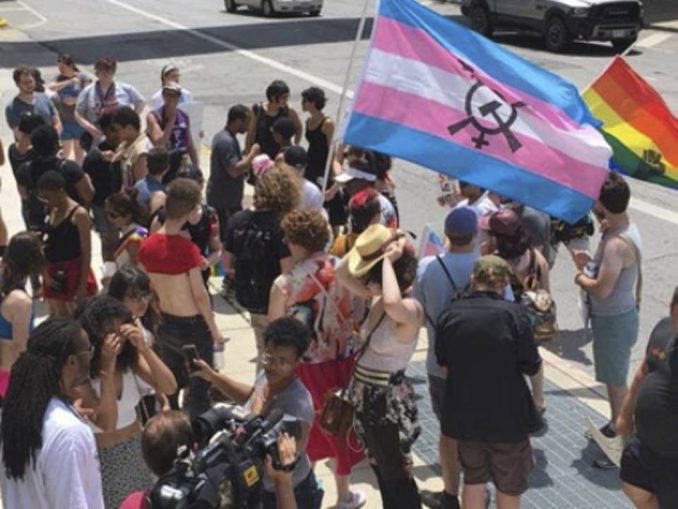 Supporters gathered outside City Hall on June 17, the day the #BlackPride4 were arrested at the Columbus Pride Parade, to demand their release.

The activists were protesting the recent acquittal of the police officer who killed Philando Castile. Other important aims were to raise awareness about the violence against and erasure of Black and Brown queer and trans people,  and in particular the lack of space for Black and Brown people at Pride festivals and to raise the names of the 14 trans woman of color who have already been murdered this year.

In a June 18 press release, activist Ariana Steele stated that “though our method was a silent, nonviolent, peaceful demonstration, the CPD [Columbus Police Department] immediately opted for unnecessary force in lieu of our civil and human rights. Protesters were assaulted with bicycles, sprayed with mace, jumped on, pushed, pummeled and chased with horses — all within two minutes of the initiation of the roadblock. In the process, four Black protestors were targeted and arrested. The #BlackPride4 were taken into custody and held in a CPD van for four hours in 90 degree heat prior to processing without being provided medical attention.”

The Columbus Police Department has confirmed that the charges for Wriply Bennett, Kendall Denton, Ashley Braxton and Deandre Miles include aggravated robbery, resisting arrest, causing harm to a police officer, failure to comply with a police officer’s order and disorderly conduct.

Later that evening, crowds gathered outside Columbus City Hall demanding the release of the anti-racism protesters and that all charges be dropped. Miles was kept overnight in solitary confinement and charged with felony aggravated robbery for allegedly trying to grab one of the cops’ guns.

At Cleveland Pride on June 24, solitary leaflets demanding the release of the #BlackPride4 and “Black Trans Lives Matter” placards were distributed to parade participants. On June 25, the website No Justice No Pride reported support actions in Seattle, Chicago, Minneapolis and New York City.

A campaign is underway to demand that all charges be dropped against the #BlackPride4. To donate to the defense fund, visit tinyurl.com/donateBlackPride4.