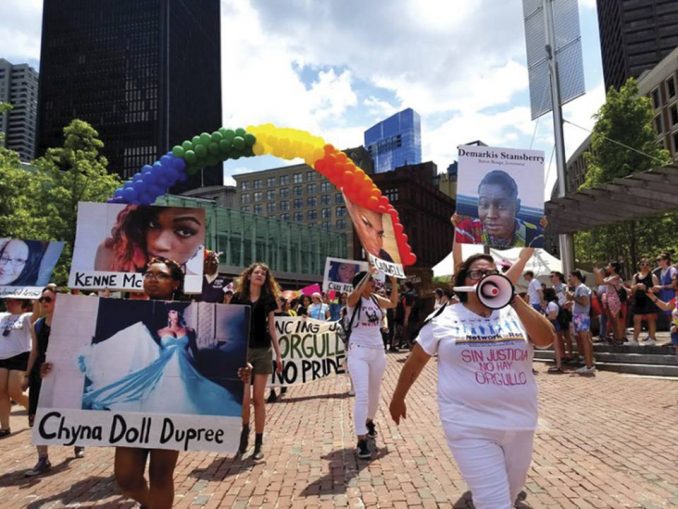 A direct action group representing queer and trans communities of color, coordinating with a larger Stonewall Warriors contingent, interrupted the June 10 Boston Pride Parade of 25,000 to bring awareness to the high rate of murder and violence against trans women of color and LGBTQ communities of color.

On the occasion of the 48th anniversary of the Stonewall Rebellion, Workers World Party issues this call for ‘Pride in solidarity.’

On the night of June 28, 1969, working- class Black and Brown queer and trans people rebelled against the unending policing and state violence waged on LGBTQ people at the Stonewall Inn, a popular place for LGBTQ people to gather in New York City.

Among the first to say “enough is enough” to the police raids were trans women of color, including Sylvia Rivera and Marsha P. Johnson, co-founders of S.T.A.R (Street Transvestite Action Revolutionaries), an organization committed to fighting for the rights of trans and gender nonconforming people.

The following year, a Pride celebration took place in New York City to commemorate the courage and right of LGBTQ people to fight back against police brutality. Both Pride and the Stonewall Rebellion were major victories for LGBTQ people and cemented their place as part of the vanguard against state violence, capitalism, racism and more.

Pride celebrations have grown in number across the U.S. and world in the past several decades. In most cities, it is the one time of year when LGBTQ people are able to gather and explicitly say “No!” to closets, to hiding and to anti-LGBTQ bigotry. In more recent years, unfortunately, Pride has also become the ground for corporate propaganda and co-optation by major banks like Wells Fargo and Bank of America. These corporations flaunt support for LGBTQ “equality” but ultimately are only using LGBTQ people to further their anti-poor and anti-worker practices that leave all working-class people either homeless, displaced, unemployed or further pushed to the margins of society.

But on the night of Stonewall, Sylvia, Marsha and countless others picked the side of history that made LGBTQ people synonymous with anti-police and anti-capitalist fightback. LGBTQ people today, particularly those of color, are not letting the pinkwashing and corporatization of Pride happen in silence.

‘Corporate scum don’t give a damn’

At this year’s Pride parade in Washington, D.C., a group of queer and trans people of color staged a disruption under the banner of #NoJusticeNoPride. Demonstrators that day were chanting, “Capital Pride is a sham, corporate scum don’t give a damn!” Those who organized the disruption wanted to bring attention to the ways Pride has been co-opted to cater more to police and corporate sponsors than to the community that made Pride happen for the first time nearly 50 years ago.

In Columbus, Ohio, four #BlackLivesMatter organizers were arrested at a Pride parade for staging a similar disruption to intervene in the corporatization of Pride.

We are facing a time of tremendous possibility, challenges and contradictions. The Trump administration’s blatant attacks — on immigrants, women, people with disabilities and others in the working class — are fanning the flames of white supremacist vigilantes of all stripes. This bigoted campaign is winning over isolated sectors of our class to fight against their best interest while promoting divide-and-conquer strategies that pit marginalized communities against each other.

The “anti-sharia law” protests on June 10 across the U.S. were called by a reactionary white gay Republican who claimed the action was organized in the interest of “protecting women and LGBTQ people.” Pride goers in Columbus, Ohio, were captured in photos cheering the police on as they arrested the four Black LGBTQ people resisting racism and corporate injustice.

We must wrestle with these internal contradictions and lift up the leadership of LGBTQ working-class people, especially those who live at the intersections of multiple oppressions.

We must learn and remember that we are not each other’s enemies. Our enemies are the capitalist state and its corporate cronies who exploit LGBTQ people for profit, that prop up false narratives about who LGBTQ people are and what we stand for, and that have turned Pride into a publicity stunt to cover up their crimes against working people.

Now more than ever we are called to use Pride as a site of struggle against the capitalist state. But in order for this to be possible, we must be ready to defend, disrupt and reclaim Pride for all of us.

We must resist the lure of corporate flags and empty promises by the state to keep LGBTQ people safe. That promise was false 50 years ago and is still a lie today as the epidemic of violence against trans women of color goes on, as LGBTQ youth continue to struggle with homelessness, and as queer and trans people battle addictions that go unresolved by a failing, profit-driven health care system.

LGBTQ people are our own heroes. The working class has the utmost potential to wage revolution in this society in part because of our ability to build class unity and solidarity.

One year ago we lost 49 LGBTQ kindred to a bigoted shooter at the Pulse night club in Orlando, Fla. We remember and mourn the lives stolen, and we remember our firm solidarity with LGBTQ Muslims and against anti-Muslim and islamophobic bigotry. We remember in the wake of HB2 in North Carolina how LGBTQ youth of color refused to be divided and stood firm in solidarity with workers who were also under attack. We remember that Black Lives Matter organizing across the U.S. and the globe is led by LGBTQ women and people of color.

Since before the Stonewall Rebellion, Workers World Party has been in the struggle to defend LGBTQ people against patriarchy and anti-LGBTQ bigotry. For the past several decades, from the AIDS epidemic to solidarity with Cuba and the Black Lives Matter movement, WWP has been in the streets raising the banner of LGBTQ liberation across all struggles.

We raise our fists in solidarity with all LGBTQ people who continue to bring to Pride its original and true revolutionary fighting spirit.

We continue to fight for Pride, for our Pride means Black Lives Matter; Indigenous sovereignty; a free Palestine; U.S. out of Latin America, the Middle East, Asia and Africa; and housing, health care and jobs at livable wages for trans women of color, young people and all workers and oppressed people.

Our Pride means socialist revolution and a world where all of us can be free.