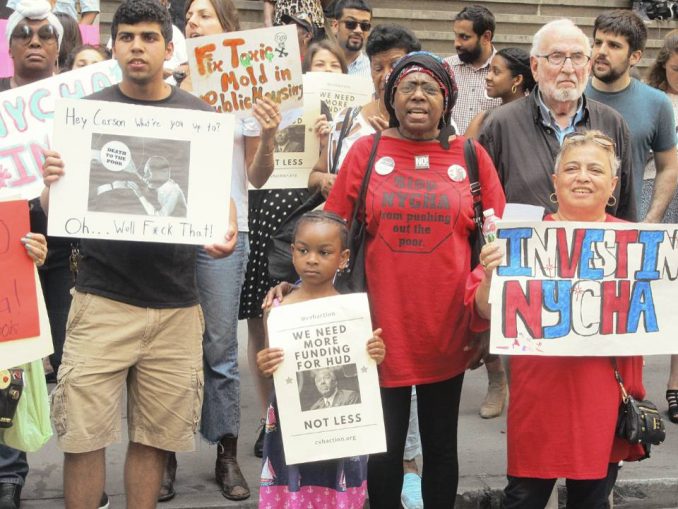 Public housing tenants in New York City gathered on Wall Street on June 12 after hearing that new Secretary of Housing and Urban Development Ben Carson was to address the Stock Exchange there. East Harlem’s Community Voices Heard mobilized housing and community groups for the rally against Carson, who has said, “Poverty is a state of mind.”

The protesters, mostly from Black and other oppressed nations, suggested that Carson spend the day in their projects instead of with stockbrokers. Some asked if he knew that 600,000 people live in New York City Housing Authority apartments, which encompass 178,000 units. The average household income is $23,500, and there is a long waiting list for such affordable housing.

Instead of adding more needed apartments, HUD and NYCHA plan to allow private developers to build private homes on government-owned property, which will then belong to the developers. In reality, the public housing safety net is being torn down.

At the Wall Street rally, helmeted police on motorcycles suddenly made the demonstrators move aside for government cars bringing Carson and his entourage to mingle with stockbrokers and other millionaires. Instead of intimidating the community leaders and other activists, the police and government security emboldened them further. They chanted, “Ben Carson, can’t you see? All these cuts are killing me!”

The next rally for affordable public housing will be in Harlem on June 24. Remember the strength of the Civil Rights’ song: “We Shall Not Be Moved!” Support affordable housing!