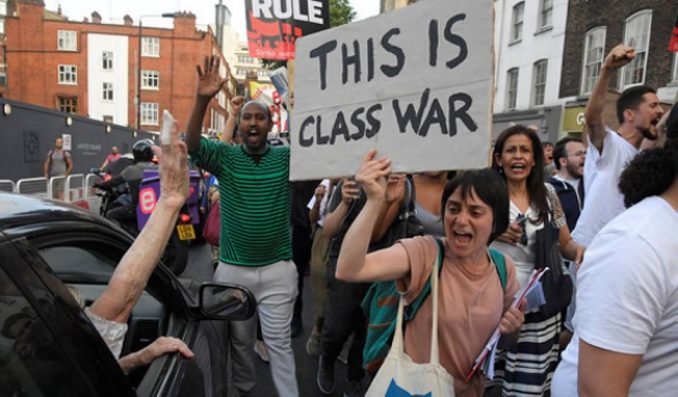 June 19 — A raging inferno tore through Grenfell Tower in London in the early hours of June 14. As of today, officials say 79 people are dead or missing and presumed dead.  Fatalities are expected to rise.  Many people are still hospitalized, some in critical condition.

The 24-story residence held 120 apartments. Residents were working class, many of them immigrants from the Philippines, Somalia, Sudan and Syria or second-generation family members. Among the missing are retired people, youth, children and infants.

Some of them are Ligaya Moore, a 79-year-old Filipina; Jessica Urbano, 13; Fathaya Alsanousi; Raina Ibrahim and her daughters, aged 5 and 3; Lucas James, 12; Isaac Shano, 3; Miriem Elgwahry, teenager; the el-Wahabi family of five; a Bangladeshi family of five; Raymond “Moses” Bernard; and Abdel Salam, 75.

Reportedly, there were no fire alarms, no sprinkler system and no evacuation plan in case of fire. There was only one badly lit fire escape and one exit for hundreds of tenants. Sleeping residents were alerted by neighbors, including Muslims who were awake early to commemorate the end of the Ramadan holiday. Their quick actions allowed many people to escape the flames.

As the Tory government headed by Prime Minister Theresa May made no move to help the disaster’s survivors, fury against officials grew.  Those displaced are left without money, housing or a list of their missing relatives.

However, local activists are organizing relief efforts, and people are coming from all over Britain to bring supplies and show solidarity.

Members of the Kensington and Chelsea Borough Council and its public housing management company were nowhere to be seen. They avoided hearing the calls for “corporate manslaughter” and “criminal negligence” charges to be brought against those responsible for this catastrophe, especially since fingers are being pointed at them.

Angry residents and their supporters marched June 16 through the Kensington and Chelsea Town Hall, chanting, “We want justice!” for the fire victims’ families and survivors. They demanded to meet with officials.  Hundreds of protesters gathered outside. Socialist Workers’ signs read: “Tories have blood on their hands! Justice for Grenfell!”

Demonstrators also marched on Whitehall, site of government buildings in central London, chanting, “No justice, no peace!” A sit-in took place on Oxford Street, and a candlelight vigil was held in memory of those who died.

Protesters are demanding the council’s commitment to house everyone dislocated by the fire in the borough; release of funds to cover victims’ losses; investigations into the tower’s renovation and into all like buildings in the borough to identify and correct safety risks; and release of all victims’ names.

Illustrating the breadth of solidarity with the residents, by June 19, nearly 200,000 people had signed a petition promoted by the internet-based organization 38 Degrees calling on “the government to improve fire safety in tower blocks to make sure the tragedy in Grenfell Tower is never repeated.” (tinyurl.com/yalkot8f)

Prime Minister May was booed when she went to the site of the fire. After much criticism and pressure and with protests getting louder, May finally met with survivors on June 17. She agreed to allocate $6,156 to each household rendered homeless by the fire — but it’s a pittance, given what residents have lost and how expensive housing costs are.

Labour Party leader Jeremy Corbyn and other Labour MPs called for taking possession of uninhabited houses in the wealthy Kensington neighborhood to provide shelter for those rendered homeless by the fire.  Corbyn said it is not acceptable that luxury apartments are empty while people go homeless. (Guardian, June 15)

The demand to seize luxury housing for those newly homeless is timely. It exposes class inequality, can be embraced by various political forces, and  moves the struggle forward to gain some justice for the Grenfell Tower survivors.

A key question arises: Was this fire avoidable, or was there deliberate neglect of a multinational residence, which housed hundreds of low-income and oppressed workers and their families in the midst of luxury townhouses in a wealthy area? Some residents suspected managers were allowing the building to decay to make way for new housing for the wealthy on this prime land. That is no idle concern as politicians push for demolishing public housing, especially in London.

Grenfell Tower tenants had asserted for years that the building was a “firetrap,” citing problems starting in 2004. Neither the government nor the managing company responded; residents’ complaints were ignored. So were calls by fire and rescue services and coroners for government-mandated installation of life-saving sprinklers in high-rise residences, even after firefighters had died in a similar building fire.

Laura Murray, whose family lived in Grenfell Tower, told of past fire hazard complaints. “But the council doesn’t consider the working class and immigrants in the same way which it does the rich, which is unacceptable in one of the world’s richest countries.” (New York Times, June 17)

The Grenfell Action Group, which represents building residents, warned of the fire dangers and years of neglect of tenants’ health and safety to the council. In 2016, the council paid $10.9 million for a major renovation, but tenants asserted that it turned the building into even more of a firetrap.  They told of intimidation by the landlord and contractors and of collusion with the local council to ignore tenants’ concerns. At a June 2016 council meeting, they stated that 90 percent of residents disliked the renovations and 68 percent reported being lied to or harassed by the management company. (Guardian, June 18)

Refurbishing included installing a cheap building covering — cladding.   Safety experts warned years earlier that the type of cladding used on Grenfell Tower endangered residents’ lives’ as it could propel a fire upwards and spread it vertically to quickly surround a building.  Made of plastic and aluminum, it is cheaper than safer steel or concrete — but is used worldwide.

Arconic, a U.S. company subsidiary, makes this cladding. Costlier materials are more fire resistant, but a lower-priced product was used at Grenfell. It’s even banned as unsafe in the U.S. for use on high buildings.

David Sibert, fire safety advisor, said that the cladding “certainly did play a part” in the Grenfell Tower fire, and that the “cost to install the fire-resistant product would have been as little as $5,600.” (!) (Guardian, June 17) Cutting expenses by this meager amount cost lives. That’s capitalist greed at its  core — as well as racism and elitist contempt for workers and poor people.

Use of the unsafe cladding caused a huge conflagration in Dubai in 2016, destroying a 72-story hotel, and has triggered terrible fires in the Middle East, France, Turkey, Australia and even in Liverpool, England.

The Grenfell tenants’ group accused management of not providing fire safety instructions, only telling tenants to stay in their apartments if a fire occurred. Victims’ relatives ask if tenants were told to remain in their apartments for too long as the fire engulfed the building — and if this policy factored into the number of casualties in the Grenfell catastrophe.

Safe public housing should be constructed and provided for all who need it in Britain, one of the world’s wealthiest countries.