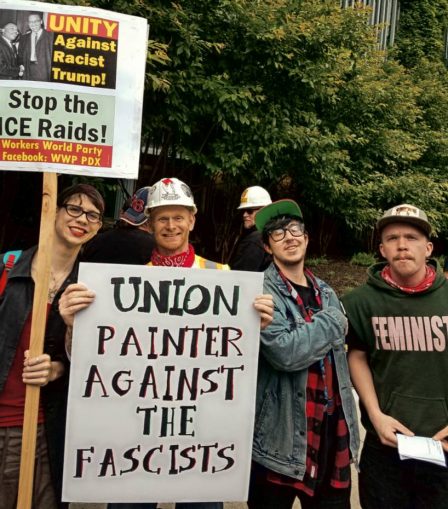 Portland, Ore., June 4 — Over 1,500 anti-fascist protesters surrounded a racist, white supremacist rally in downtown Portland today, only a week and change after the MAX train murders took place. The whole city is still in an uproar over the ugly incident on May 26 where a known white supremacist screamed racial slurs at young Muslim women and then killed the two men and seriously injured another with a knife when they defended the Muslim women.

It comes as no surprise that 1,500 anti-fascists thronged around the rally and drowned out the meager jumble of no more than 100 police-protected fascists. The counterprotest was attended by labor unions with loudspeakers. Union members led chants such as “Muslim rights, union rights. Same struggle, same fight. Workers of the world unite.”

The sizable Rose City Antifa sang, “Build a bonfire, build a bonfire/Put the fascists right on top./Put the coppers in the middle,/And we’ll burn the fucking lot” to the tune of “Oh My Darling, Clementine.”

After breaking up some fascist infighting, the city, state and U.S. Department of Homeland Security police lined up in riot gear facing the anti-fascists. Police distributed their forces along the massive assemblage on the north side of the square, as the anti-fascists on the west side of the square swelled and took the street. The masses kept the pressure on and made the message loud and clear both in word and deed: Fascists are not welcome here.