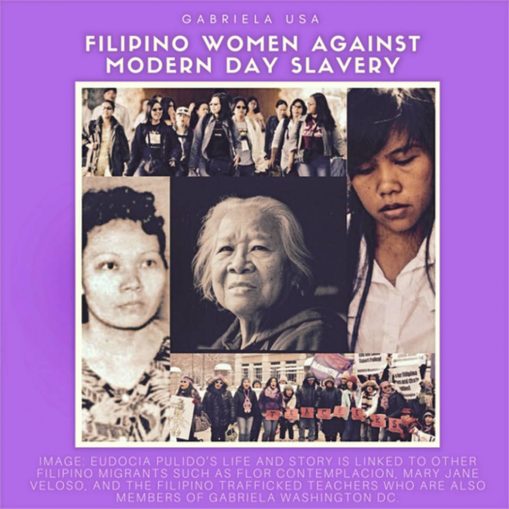 The Atlantic magazine published an article in the June 2017 issue entitled, “My Family’s Slave,” by journalist Alex Tizon.  His article regarding the story of Eudocia Pulido, known as “Lola,” and her forced migration and exploitation as a modern-day slave in the United States highlights the current conditions facing Filipino women.

Eudocia Pulido’s story cannot be understood outside the context of Philippine society and history — which is rooted in U.S. imperialism and neoliberal economic policies that have caused the systemic suffering of many underpaid domestic helpers like Lola.

The Philippines is one of the largest labor exporters in the world with 6,000 Filipinos, 60 percent of them women, leaving the country every single day in order to work.  This is because of rampant poverty, joblessness, and landlessness inside the country.

The women are lured to apply for positions that do not exist, with promises of legal status and decent wages.  Instead, they become undocumented, and are drowning in debt and isolated in a foreign country. Thousands of overseas Filipino workers (OFWs) end up working in virtual slavery.

Recruiters and employment agencies take advantage of these women by charging them exorbitant fees, demanding loan “repayments” and threatening them or their families with deportation or physical violence. Living in fear and with no place to go, many OFWs endure the discrimination, abuse, and exploitation in order to survive.

It is important that we not whitewash the writer’s parents and family’s crimes of slavery, imprisonment, and trafficking. Tizon’s account of Eudocia Pulido’s story does not exonerate him from his family’s complicity in the abuse and exploitation of another human being. Also, it is critical to recognize that this particular experience is not an isolated one — and it stems from the Philippines’ feudal, patriarchal, and imperialist structure.

The commodification and exploitation of generations of Filipina women continue to be an inherent effect of the country’s ever-worsening conditions.  These will  persist and generate many more stories like Eudocia Pulido’s until comprehensive and fundamental socioeconomic and political changes are made to address the root causes of the country’s poverty.

Members of GABRIELA USA continue to take action and call for an end to the exploitative system in the Philippines.  We denounce the Philippine government for neglecting its own people inside the country and lack of protections for OFWs abroad. In addition, we uplift the voices of Filipino migrant women and encourage them to tell their own stories.

GABRIELA USA seeks to empower migrant women to know and understand their rights, to fight back against oppression and exploitation, and to participate in the movement for national democracy in the Philippines. If you are moved by Lola’s story, we encourage you to join a chapter of GABRIELA USA and join the fight against feudal-patriarchy and the systems of power that allow women like Lola to be forced into exploitation.

GABRIELA USA is a grass-roots-based alliance of progressive Filipino women organized in the United States which seeks to wage a struggle for the liberation of all oppressed Filipino women and the rest of our people. While we vigorously campaign on women-specific issues, such as women’s rights, gender discrimination, violence against women, and women’s health and reproductive rights, GABRIELA USA also addresses national and international economic and political issues that affect Filipino women. GABRIELA USA is an overseas chapter of GABRIELA Philippines, and is a member organization of BAYAN-USA and the International Women’s Alliance. See GABRIELAUSA.org.