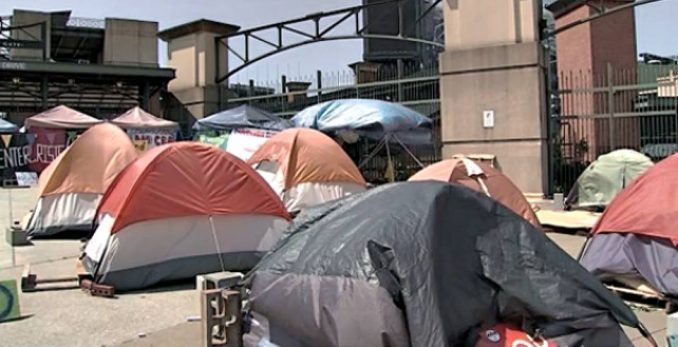 Without warning, in the early morning hours of June 2, dozens of Georgia State University police raided Tent City, built at the site of Turner Field, the former home of the Atlanta Braves baseball team.  They slashed the tents, knocking them over, destroying the contents and threatened people with arrest as they scrambled to get their belongings.

The residents of the neighborhoods surrounding the stadium, along with students at GSU and other colleges, plus anti-displacement activists, had erected a collection of tents on April 1 at the intersection of Hank Aaron and Ralph Abernathy boulevards, abutting Turner Field.

It was a visible sign of the fierce determination of area homeowners and renters not to be ignored and dismissed by the new owners of the property, GSU and Carter Developers, as they planned their multimillion dollar “redo” of the area.

The historically Black working-class area just south of the state Capitol  building has long been targeted for “urban renewal” schemes, first with the construction of interstate highways that divided the community and separated it from downtown Atlanta, and then with the building of Fulton County Stadium, followed by the Olympic Stadium, which then became Turner Field.

Massive parking lots surrounded the sports arenas, with their concrete surfaces directing rainwater into people’s adjacent homes. Beyond the home games of the baseball season, with its traffic jams and littering, noisy fans, the acreage belonging to Turner Field saw little use and provided the neighborhoods nothing but barren landscapes most of the time.

Immediately upon learning that the Braves were moving to the suburbs and that the city would be selling the property, residents of the Peoplestown, Mechanicsville, Summerhill and Pittsburgh neighborhoods, along with other community organizations, began an extensive outreach effort to establish what people wanted from the redevelopment.

Numerous committees were formed; meetings were held for over two years; residents traveled to other cities to see how their process had worked. All this hard work culminated in a document called the “Community Benefits Agreement” (CBA) which outlined areas such as jobs and job training, education initiatives, transportation, green spaces, sidewalk and lighting, and security issues, which would be signed by the purchasing entities and included in the planning of the new office, retail, housing, university and athletic buildings.

A major concern the CBA dealt with was the displacement of longtime residents who owned small bungalows, or renters of single homes or apartments. A key demand is protection for these community elders.

Already, speculators have bought rental property and evicted the tenants in preparation for selling the land again at a higher price.

The Turner Field Benefits Coalition members have spoken at countless public meetings, organized demonstrations, marches and sit-ins, held numerous press conferences and earned the support of many in this city, whose own neighborhoods are being transformed by high-priced, high-rise condos and luxury housing.

The crisis of affordable housing is extreme in Atlanta, with increased migration from the suburbs and the growing high-tech industry, tourism and corporate construction. At the same time, Atlanta has tens of thousands of low-wage workers who service this growth but can barely find housing on their meager pay.

For months, GSU, the major partner in the purchase with Carter and some smaller developers, refused to meet with the Turner Field Benefits Coalition. GSU President Mark Becker has refused to meet with his own students, many of whom live in the affected area, to discuss how the university can be a good neighbor that improves the quality of life for old and new residents. Instead, students have been arrested and charged with trespass on their own campus for attempting to speak with him.

On April 1, following a large march through the neighborhood, which ended at Turner Field, the tents were erected and the occupation began. It received ongoing media coverage.

For 63 days, there was a 24-hour presence despite intense heat, soaking rain, tornado-like wind and constant surveillance by police agencies. Senior residents and students from GSU, Morehouse, Spelman, Agnes Scott, Emory and other schools shared stories and food together; there were movie nights and music performances; other organizations held their meetings at Tent City in solidarity.

Every day, cars passing by the busy intersection were greeted with signs denouncing displacement and demanding a voice in the future of their neighborhood. Honks of support and waves would always bring cheers from the Tent City inhabitants.

Then recently, a press release was issued declaring that an agreement had been made with a group led by Suzanne Mitchell, the sister-in-law of the Atlanta City Council president. This “behind closed doors” move backfired and a press conference that brought out several elected officials — including city council members, candidates for the 2017 city mayoral race and state representatives — prompted negotiations to begin between the coalition, GSU and Carter.

At these meetings, authorities had stated that they would not have an issue with Tent City remaining until late August. Sherise Brown and Allison Johnson, two of the neighborhood leaders, stated that it was exactly this kind of false promise that made them determined to win a signed agreement.

They shared the sentiment upon standing at the now cleared space that was Tent City: “They may have knocked down our tents but not our spirit. We’re in this to win!”