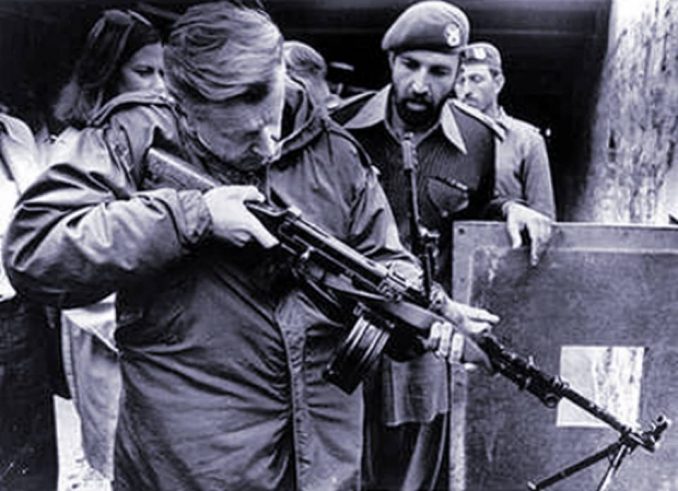 Zbigniew Brzezinski, sighting down the barrel of an AK-47 machine gun looking toward Afghanistan, in the Khyber Pass.

The recent film “War Machine,” made by Brad Pitt and released by Netflix, centers around an egotistical general commanding U.S. forces in Afghanistan. Its message boils down to this one truth: If you invade someone’s country, they’re going to shoot at you and tell you to get out.

A whole generation has grown up since the U.S. CIA first began training and arming a covert opposition force in Afghanistan in 1979. The first regular U.S. armed forces were sent there in 2001. Since then, hundreds of thousands of U.S. soldiers have been sent to Afghanistan, allegedly to “help” a succession of Afghan governments that were put in place by the occupiers.

This war began under Jimmy Carter, a Democrat, and has continued throughout the terms of Ronald Reagan, George H.W. Bush, Bill Clinton, George W. Bush and Barack Obama. Now Donald Trump is considering an increase in the number of U.S. troops in Afghanistan from 8,400 to 50,000. (bloomberg.com, May 17)

It is the longest U.S. war ever. Why?

Today, it is supposedly a war against the Taliban, ISIS and al-Qaida. But these groups are descended from the “warlords” that the CIA first turned into fighting units against a government led by the Progressive Democratic Party of Afghanistan, which had taken power in 1978.

Zbigniew Brzezinski, who died last month at the ripe old age of 89, was the foremost architect of that vicious war as Carter’s national security adviser. Once it became known that the CIA had created a covert army in Afghanistan, the story given out by the U.S. government was that it was helping the Afghan people resist a Soviet invasion. This became the rationale for an increasingly bloody and expensive war that eventually overthrew the progressive government of Afghanistan.

But Brzezinski himself later bragged that the CIA operation had begun six months before the Soviet Union sent troops to Afghanistan. In fact, the Soviet intervention was not an “invasion.” It had been requested by the Afghan government to defend it against the CIA’s covert war.

Brzezinski revealed the truth to the French paper Le Nouvel Observateur in 1998: “According to the official version of history, CIA aid to the Mujahadeen began during 1980, that is to say, after the Soviet army invaded Afghanistan on Dec. 24, 1979. But the reality, secretly guarded until now, is completely otherwise. Indeed, it was on July 3, 1979, that President Carter signed the first directive for secret aid to the opponents of the pro-Soviet regime in Kabul. And that very day, I wrote a note to the president in which I explained to him that in my opinion this aid was going to induce a Soviet military intervention.”

Asked by the interviewer if he now regretted anything, Brzezinski replied, “Regret what? That secret operation was an excellent idea. It had the effect of drawing the Russians into the Afghan trap and you want me to regret it?” (Le Nouvel Observateur, Jan. 15-21, 1998)

The timing of the covert CIA operation had already been revealed by former CIA Director Robert M. Gates in his book “From the Shadows” (Simon & Schuster, 1996). Gates wrote: “The Carter administration began looking at the possibility of covert assistance to the insurgents opposing the pro-Soviet, Marxist government of President Taraki at the beginning of 1979. On March 5, 1979, CIA sent several covert action options relating to Afghanistan to the SCC [Special Coordination Committee].” A meeting of the SCC “was finally held on July 3, 1979, and — almost six months before the Soviets invaded Afghanistan — Jimmy Carter signed the first finding to help the Mujahedin covertly.”

Yet, despite these admissions by top government officials, the narrative in the U.S. media continues to be that the U.S. set up, armed and trained the “Mujahedin” to counter a Soviet “invasion.” So that was just a cover story. What were the real reasons for the U.S. spending billions of dollars and destroying half the country in an effort to bring down the government of Afghanistan?

To answer that question, it helps to know a little about Afghanistan’s history and how it had remained independent for more than a century, even as the European and U.S. imperialist powers seized much of Asia, Africa and Latin America as their colonies or neocolonies.

Britain, which controlled neighboring India, invaded Afghanistan three times — in 1839, 1879 and 1919 — but could not keep a puppet colonial regime in power there. Each time, popular uprisings drove out the British troops. However, London did force the Afghan government to accept British influence over its foreign policy, and in 1893 the British drew up the Durand line. This supposedly temporary division became the border between Afghanistan and British India — the part that today is Pakistan.

The last invasion, in 1919, provoked an uprising that overthrew the government of Habibollah, who had capitulated to the British. Inspired by the success of the Russian Revolution, the new regime of Amanollah then signed a treaty of friendship with the Bolshevik government, being one of the first countries to do so. From then until the 1970s, Afghanistan would not join any military alliance against the USSR.

The Progressive Democratic Party of Afghanistan was formed in 1965. Its program was anti-feudal and included land reform, canceling the debts of the peasants and democratic rights for women, including an end to the dowry and establishing education and health care open to all women and men.

By the 1970s, the Afghan government of Mohammad Daoud was moving to the right in its domestic policy and toward NATO in its foreign policy. The vast and mountainous countryside was under the iron grip of feudal landlords. In Kabul and a few other cities, however, the PDPA had developed much support among students, especially young women, as well as low-paid civil servants and soldiers.

On April 26, 1978, even as the arch-imperialist and billionaire Nelson Rockefeller was on his way to visit Daoud in Kabul, the government launched an assault on the PDPA, arresting almost its entire leadership. This came right after a massive funeral for members of the PDPA who had been killed by Daoud’s police. Clearly, Daoud meant to assure the U.S. that his regime could repress any opposition that might arise to its pivot toward imperialism.

Within a day, however, army units had mutinied and liberated the PDPA leaders from their prison cells. In one case, soldiers used a tank to break down the walls of the jail where PDPA leader Nur Mohammad Taraki was being held. Taraki went on to become head of what was known as the Saur Revolution.

The U.S. Department of Defense has published “Country Study” books about countries around the world. They contain useful information meant for U.S. government employees sent abroad and can be more truthful than the propaganda put out by other government bodies, because the people using these books need to know what conditions are really like in the countries they are being sent to.

The version of “Afghanistan — A Country Study” that was published in 1986 contains startling admissions that go against the established government narrative about Afghanistan. For example, it says that “when the PDPA took power, it quickly moved to remove both landownership inequalities and usury.” The book added that the PDPA also canceled mortgage debts of agricultural laborers, tenants and small landowners. It set up extensive literacy programs, especially for women, and printed textbooks in many languages spoken in different parts of Afghanistan.

Said the Pentagon book, “The government trained many more teachers, built additional schools and kindergartens, and instituted nurseries for orphans.” Among the very first decrees of the revolution were to prohibit bride-price and give women freedom of choice in marriage.

This should be kept in mind today, when the propaganda machine prettifying U.S. imperialism’s long war of oppression in Afghanistan makes it seem that defending women’s rights is among Washington’s top priorities.

But in 1978, when Brzezinski and the Carter regime launched the war against the Afghan revolution, they knew it was a progressive regime trying to move this very underdeveloped country out of feudal oppression. That didn’t stop them from arming and financing a counterrevolution.

Within a few years, the contras who had been armed, trained and financed by the CIA were assassinating idealistic young teachers, women and men, who had gone to the countryside to teach literacy to the people.

One of these contras was Osama bin Laden. Under the excuse that it was defending “freedom of religion,” the U.S. undermined the secular government of the PDPA by creating an army that opposed the PDPA’s progressive reforms in the name of fighting for an Islamic state.

At the same time, however, U.S. imperialism was trying to undermine the Islamic republic in Iran, which took power in 1979 after a huge revolution there against the Shah, a puppet who had been put in power by the U.S. and British oil companies. That revolution also encompassed many progressive, secular fighters, but the Islamic leaders had the strongest organization among the masses and proved capable of driving out the Shah and his grouping.

Religion is not the real issue

Clearly, the issue of religion is not what motivates the imperialists. Nor do they care about women’s rights. They will use any excuse and make any temporary alliances as they try to reassert their economic domination of the region. What motivates them is their need to plunder the world, especially the areas rich in oil, for the benefit of the billionaire U.S. ruling class.

But when you invade a country, the people will shoot at you and tell you to get out.

That is what has happened in Afghanistan. Once the progressive forces were destroyed, there was a vacuum of leadership to resist the imperialists, who still occupy the country and hand pick its government officials. The armed resistance to this has, for now, coalesced around forces organized on a religious basis, some of whom espouse an extremely reactionary agenda. Nevertheless, they have won many recruits who are even willing to sacrifice their own lives in order to get the U.S. out.

No amount of escalating the supposed “war on terror” can erase this terrible situation. On the contrary. Every bomb dropped on villages in Afghanistan only intensifies the hatred of imperialism, no matter what form it takes. Every political attack on Muslims by Trump or his counterparts in Europe only deepens the anger of those who are oppressed.

In any kind of war, it is the ordinary people, whether soldiers or civilians, who bear the brunt of the suffering. It is the wealthy who have the means to protect themselves even as they profit from a victory.

The “war on terror” has taken its toll not only on the people of Afghanistan but also on people just walking the streets of major Western cities, who are made to pay for the crimes of the ruling classes. It has taken its toll on young soldiers who are told nothing about Afghanistan’s history and who, if they survive deployment to that war zone, have to fight just for decent medical care back in the U.S.

This war is not in the headlines, even when the blowback from it is. It will go on forever — unless the people stop it. U.S. out of Afghanistan!