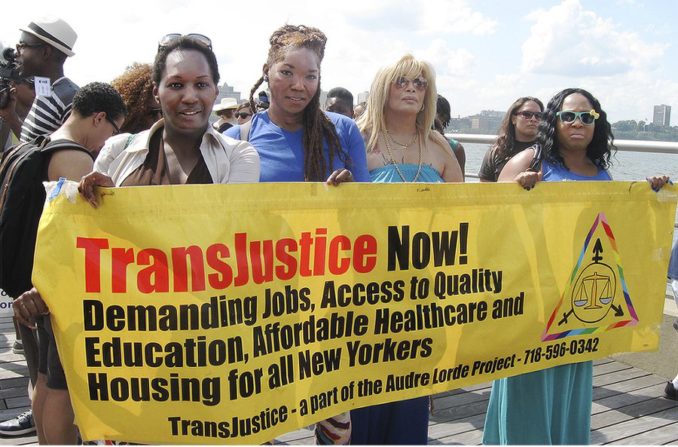 The following excerpts are from a talk by Cosmia Bohannan-Blumke on “Trans liberation and Mx. Bostick” at a May 20 Workers World Party forum in New York titled “Black Lives Matter! Trans Lives Matter! USA out of Everywhere!”

A few weeks ago, a trans person of color was brutally assaulted on the street in the Chelsea district of Manhattan and, despite being brought to a hospital and treated, didn’t survive. This person, believed to be a trans woman, was dubbed Mx. Bostick by local trans advocacy communities, because their gender was unknown.

This tragedy almost went unnoticed, as virtually no news outlets reported on it. Even the trans community only received word of it well after the fact, and it took much investigation to learn any details about the victim that might give clues about who they were. Those of us who advocate for the lives of trans women of color are more than aware that this was not some isolated incident.

The number of trans women of color living in the United States who are murdered each year is not a figure that is easy to calculate, largely because their deaths are all too often not reported or are misreported, and they are often branded by their birth names and misgendered as gay men.

Frequently they are isolated from their families due to rejection, and the only hope of them being remembered as they lived falls upon their local trans communities, who have no choice but to memorialize one of their sisters. Mx. Bostick had few connections to such communities here and nearly fell through the cracks. It’s certain that others have been less lucky, and for this reason those counting deceased trans people often end their toll with the terribly familiar phrase “that we know of.”

Why does this happen? Why are trans women of color so frequently targeted for deadly violence, and what can we do, not just as individuals, but as an organization, to combat it?

The answer is complex, but not impenetrable. It’s not difficult for one to see the ongoing cultural and political war against trans people in which they are mocked, excluded, portrayed as a symptom of patriarchal society in decay, even blamed for the shortcomings of certain liberal politicians. But the social perception of trans women is not the primary catalyst of this oppression; for trans oppression, like any other, including racism, goes far deeper than individual bigotry. Transphobic violence appears in many, often much more insidious, forms, including medical pathologization, legal discrimination and, ultimately, economic exploitation.

Trans people face repression at the hands of the medical state apparatus, which labels “gender dysphoria” a medical disorder, just as it once did homosexuality. Most medical institutions are not well equipped to deal with trans patients, and access to gender-affirming therapies and procedures are still gate-kept behind absurd requirements and waiting times, forcing trans patients to go without essential services simply to demonstrate that their suffering is genuine.

Even when one is able to acquire a hormone prescription, the trials don’t end there. “Shortages” of injectable hormones such as estrogen are not uncommon. These aren’t always simple cases of scarcity, however, for cisgender patients with hormone deficiencies often have far easier access to similar resources. The materials for effective trans care already exist, but they are not effectively distributed to those in need.

Additionally, trans people are still subject to housing discrimination in myriad ways, despite gender-based discrimination in the housing market being illegal. This, combined with the gentrification of urban areas, including here in New York, makes it far more difficult for struggling trans people to find a stable living situation, fueling the already astronomical levels of homelessness among the general trans population, which overwhelmingly affects working-class, Black and Brown trans women.

Meanwhile, similarly ubiquitous job discrimination, including obstacles to applicants, harassment and firings, prevents trans people from finding reliable employment. The violent criminalization of sex work, which sectors of the trans population often turn to, also adds to the crisis. In addition to putting trans women in harm’s way at the hands of abusive clients, the longterm ramifications ultimately lead to more trans women subjected to the horrors of the prison system.

Mx. Bostick was homeless at the time of their assault, and a leading theory is that their assailant met them prior to the incident in a local homeless shelter. The life of Mx. Bostick might not have been cut short had they not been homeless. So why are so many working-class trans people, even those lucky enough to not have been rejected by their families, impoverished and without housing?

The answer is economic exploitation, a concept which is key to understanding any form of oppression, because it allows us to see how its manifestations are connected. In addition to the crises of capitalism faced by underpaid workers and discrimination faced by people of color, the aforementioned high cost of trans medical care, along with housing and job discrimination, form a virtually unbreakable cycle of poverty and homelessness. This perspective reveals that the fault lies not simply with the perpetrators of these individual injustices, but with the entire capitalist system that permits them.

In order to achieve trans liberation, we must achieve socialism.

As an example of the struggle for trans liberation outside of capitalism, we look in particular to the socialist nation of Cuba, which in recent years has taken crucial steps toward actively combating transphobia, passing comprehensive legal protections on behalf of trans people, and incorporating gender-affirming hormone therapy and surgeries into its socialized medical care system.

This last point is perhaps the most stark difference between the standing of trans people in the U.S. and in Cuba. Hormone replacement therapy and sex reassignment surgery are provided in Cuba completely free of cost to transgender people upon request. This is because health care and housing are provided to all Cuban citizens. There is no medical industry to exploit transgender patients, there are no landlords to exclude transgender tenants, and there are widespread progressive measures such as inclusive education and raising public awareness of the trans struggle.

Just a few weeks ago, thousands marched in Havana for the 10th annual March Against Transphobia and Homophobia. The achievements of LGBT people in revolutionary Cuba are a shining beacon that reminds us that gay and trans liberation are not only achievable, but already happening.

The tremendous obstacles faced by trans people in order to survive are not individual issues to be tackled one by one. While championing legislation that offers protections to trans people can be beneficial in the short term, this cannot be the extent of our praxis. There is only so much we can accomplish within the confines of a fundamentally unjust and exploitative system, because the root of the problem lies in the system itself. We should not view the struggle for justice as individual battles to be fought, but a war to be won.

Trans liberation will not be achieved in the courts and legislatures of the capitalist ruling class. It must be fought for.