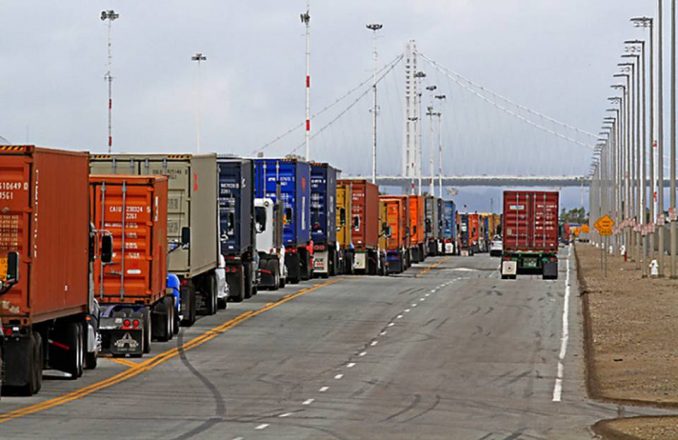 Longshore workers shut down container truck traffic over racist acts at the Port of Oakland in California.

In a stunning worker action against racism, about 100 members of International Longshore and Warehouse Union Local 10 walked out May 25 at one of the largest and busiest terminals in the Port of Oakland. They suspended all operations there and brought international container traffic to a complete standstill for hours. Container trucks were backed up all around the port and on Interstate 880.

The ILWU called the shutdown to protest blatant racist acts at the job site, including the discovery that morning of a noose, a despicable symbol of white supremacy and lynching, inside a truck used by ILWU members. According to Derrick Muhammad, the union’s secretary-treasurer, about 60 percent of the ILWU local is African American. (KPIX 5)

Muhammad noted that an unspecified number of nooses have been found at the terminal in recent weeks. They have been left on a fence, on the ground and on trucks. Another noose was found as recently as May 15. In late 2015, someone had spray painted a piece of equipment with a racist slur against African Americans. (East Bay Times, May 25)

Muhammed said that longshore work is already inherently dangerous, and all workers need to know that their co-workers “have their backs.” He stressed that “every worker has the right to work in a safe environment.” He pointed out that this fact makes the racist acts “a bonafide health and safety issue because of the history behind the noose and what it means for Black people in America.” A health and safety issue is an acceptable reason for a job walkout under standard union contracts.

The East Bay Times reported that ILWU International President Robert McEllrath issued a statement that “the ILWU is a progressive and diverse union, and we reject in the strongest possible terms racism in all its forms. The display of a hangman’s noose for the second time in two weeks at the work site is inexcusable and expressly prohibited conduct under the terms of the ILWU-PMA collective bargaining agreement. The Union is committed to securing a non-discriminatory work environment for all individuals working at the ports.”

ILWU Local 10 has a long and militant history of progressive work actions, from its leadership in the 1934 San Francisco general strike under Marxist Harry Bridges to its boycotts of South African apartheid cargo, starting in 1962.

More recently, in 2010 the local shut down the port to protest the murder of Oscar Grant, an African-American man killed by cops at Oakland’s nearby Fruitvale Station. Last year the local affirmed its support for Indigenous sovereignty at Standing Rock, N.D., and this year refused to work on Jan. 20, Inauguration Day, to protest the election of Trump and the ramping up of attacks on working and oppressed people, especially unions.

Every racist act or symbol at a workplace is significant because racism is always an attack on the solidarity and unity of workers. The recent action by Local 10 is a call to all workers to fight against racism and for solidarity at their jobs with creative and militant actions.