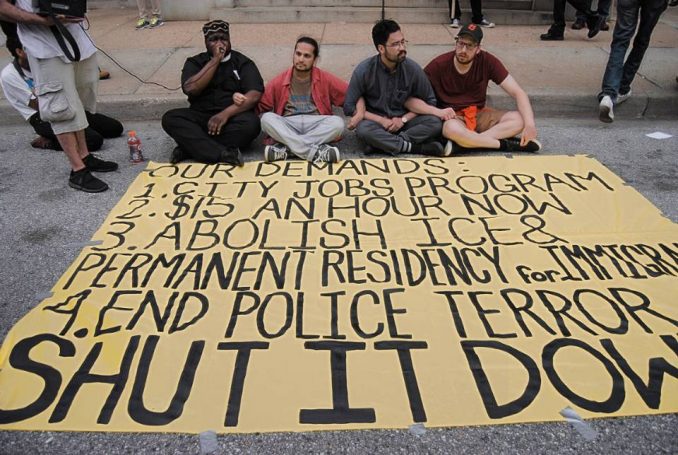 Charges have been dropped on three of the protesters seen above, who were arrested at the ICE office on May 1.

Three demonstrators who were arrested while protesting at the Immigration and Customs Enforcement office on May 1 won their cases in court on May 22.

Those whose charges were dismissed include the Rev. C.D. Witherspoon, a noted Baltimore activist and former president of the Baltimore Southern Christian Leadership Conference; Rasika Ruwanpathirana, an immigrant, filmmaker and representative of Workers World Party; and Andrew Mayton, a union activist. A fourth protester, Baltimore law student Alec Summerfield, is scheduled to go to court in June. All four had been charged with “failure to obey.”

On May 1, after hundreds marched from downtown Baltimore, the four were arrested at Baltimore’s ICE office as they demanded that ICE shut down. They were also demanding a $15-an-hour minimum wage and an end to racism and police terror.

Sharon Black, speaking for the Baltimore People’s Power Assembly, the organizer of the demonstration, said, “ICE is the notorious agency that has brutally separated immigrant families and deported scores of immigrants under new orders from the Trump administration.”

Black continued, “This is a victory today. Our demand to stop deportations is all the more urgent since the Trump administration is considering ending the Temporary Protected Status on Haitian immigrants.

“The Haitians eligible for TPS, who are mainly survivors of natural disasters in Haiti that made their lives there impossible, have recently had their status extended, but only for six months. The People’s Power Assembly and Workers World Party point out that if their TPS is withdrawn, it would put some 58,000 Haitian people at risk for immediate deportation.”