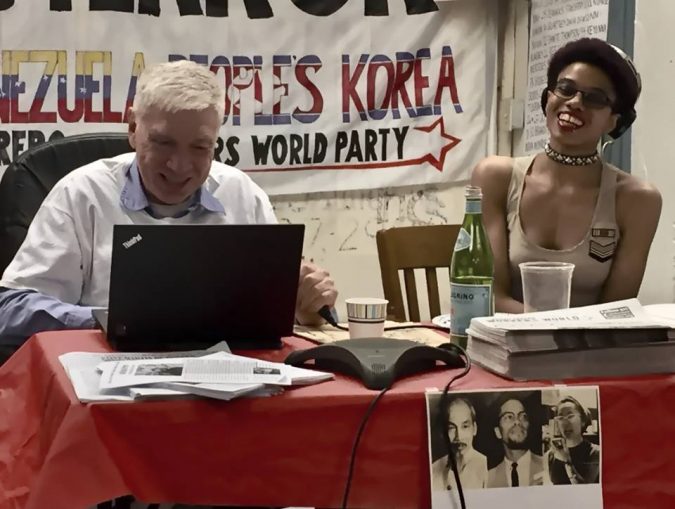 John Catalinotto and Diva Williams share their amusement about a 1969 GI letter comically reporting how GIs tried to get rid of an oppressive sergeant.

The Boston branch of Workers World Party hosted activist and revolutionary John Catalinotto on May 19. Catalinotto, a managing editor of Workers World newspaper, is the author of “Turn the Guns Around,” a book detailing how U.S. soldiers during the U.S. war against Vietnam developed an anti-capitalist and anti-war revolutionary culture in forming a union called the American Servicemen’s Union.

The book shows readers how a movement of anti-oppressive consciousness can stop colonialism through strategic activism. Other examples of people’s resistance were also heavily discussed, including the Paris and Portuguese uprisings of 1968 and 1974, respectively.

Catalinotto’s presentation focused on two crucial elements of what V.I. Lenin called revolutionary defeatism (i.e., supporting the defeat of one’s “own” bourgeoisie in an imperialist or colonialist war): what has successfully shaken colonialism in the past, and how we can bring such actions into a modern revolutionary reality.

Catalinotto brought solidarity and hope to the meeting. Many of those attending had brought friends, family and coworkers. His words reminded all present that no system is too big to fail when met by solid, conscious ­organizing.

Activists complemented the meeting theme with stories of their resistance to U.S. aggression, including Greg Laxer, a former member of the ASU, and Frank Neisser, an anti-war activist who was charged with treason for reporting U.S. troop movements to North Vietnamese fighters.