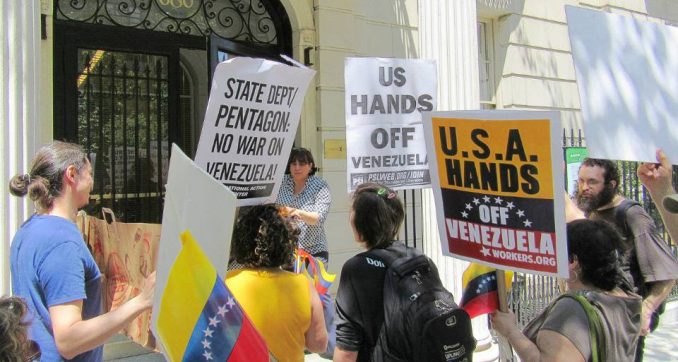 People in solidarity with Bolivarian Venezuela held a lunchtime picket at the Council of the Americas in New York City on May 17 to protest a scheduled talk by Organization of American States General Secretary Luis Almagro, a stooge of the U.S. counterrevolutionary campaign against that country.

Protesters took over the sidewalk in front of the Upper East Side mansion housing the Council of the Americas. They chanted, “¡Almagro, asesino!” (“Almagro, murderer!”) “¡Maduro, amigo! ¡El pueblo está contigo!” ([President Nicolás] “Maduro, friend! The people are with yo u!”) and “USA, hands off Venezuela!”

The OAS head cancelled his appearance, apparently afraid of being confronted by Chavistas and supporters, and the picketers declared a victory.

Protesters then decided to march to the Venezuelan Consulate several blocks away to show their solidarity with the Venezuelan government. Solidarity activists saw for themselves the actions of right-wing gangsters, who had defaced the consulate with counterrevolutionary slogans and blood thrown on the building. Venezuelan government officials came out of the consulate to greet the demonstrators and thank them for their solidarity.