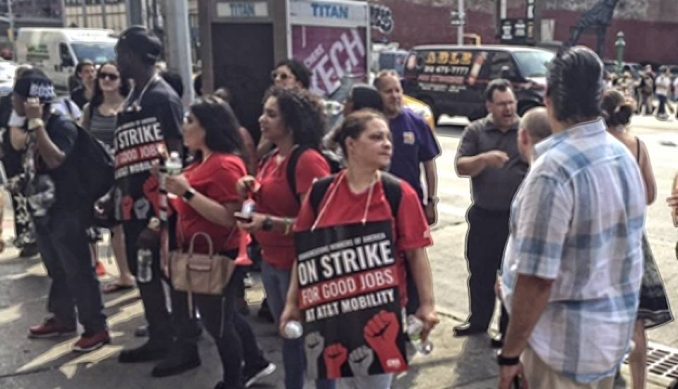 At 3 p.m. EDT on May 19, 21,000 workers began streaming out of AT&T retail outlets across the U.S. These AT&T Wireless workers in 36 states and the District of Columbia were joined by almost as many striking wireline, call center, internet service and DirecTV workers in Nevada, California and Connecticut.

A strike was on, called by the Communications Workers.

The walkout of AT&T retail workers might be the largest retail strike in U.S. labor history. Workers at DirecTV, recently acquired by AT&T, are striking for their first contract ever. The action comes a little more than a year after the victorious Verizon strike by 39,000 members of the CWA and Brotherhood of Electrical Workers.

CWA mobilized the strike, closing retail outlets for the entire weekend, over AT&T’s “failure to present serious proposals that invest in good jobs with a future.” (cwa-union.org) CWA has filed a charge with the National Labor Relations Board about the company’s refusal to provide job sourcing information the union requested. Data on vacations, sick days, training, job transfers and benefits have also been illegally withheld by the company.

Because AT&T workers pay for part of their health care benefits, rising costs are eroding their earnings. They badly need an adequate pay increase to offset this burden. Instead, AT&T wants to increase employee contributions to health benefits. The meager raises offered to workers would be eaten up by inflation. AT&T has also forced retail workers to take what amounts to a pay cut when it unilaterally restructured their sales commission formula, which CWA wants to negotiate in the new contract.

CWA revealed that AT&T has subcontracted 12,000 call center jobs since 2011. Workers in the Dominican Republic, employed by third-party contractors, perform the same work as CWA members for a fraction of what U.S. workers make. CWA staff went to the Dominican Republic to investigate and saw the union-busting tactics Dominican workers face for trying to improve their situation.

AT&T is number 10 — just after General Motors and Ford — on the Fortune 500 list of the biggest U.S. companies. AT&T makes about a billion dollars in profit every month. The more the company squeezes out of worker pay and benefits, the more AT&T profits. The telecommunication giant is poised to acquire media entertainment giant Time Warner, pending approval by the Department of Justice.

CWA alerted union supporters in advance when and where to show up for picket line actions. Many were outside AT&T stores, ready to show solidarity, as workers marched out of stores across the U.S.

At a Manhattan store, the line of strikers and family members grew to 150 in the first 10 minutes of the action, and kept growing. A multinational crew of picket captains led the crowd in chants like “We built it up, we take it down!” and “Every job a Union job!” A striker from the Bronx told Workers World proudly, “The Fordham Road store has been shut down completely since Friday. Not a single scab.” A crew from a Washington Heights store said theirs was open but only with managers.

These CWA Local 1101 members were joined by the president of the Clerical, Administration and Technical Staff (UCATS) Local 3882 at New York University, along with an editor of CWA 1180’s magazine, and members of the American Federation of Teachers and the Professional Staff Congress of City University of New York.

Nobody passing by attempted to enter the store as workers marched to three other midtown stores and back. More coordinated support actions took place during the weekend.

The union states that members “have vowed to do what they have to do if AT&T violates their rights or an open-ended strike becomes necessary.” (cwa-union.org)

Sara Catalinotto contributed to this article.