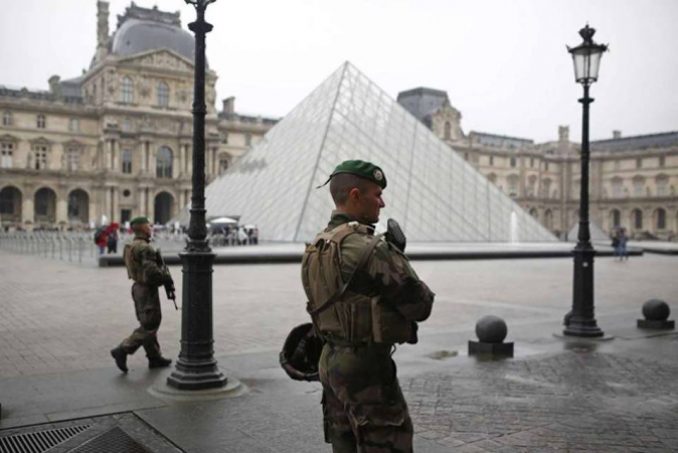 Soldiers patrol in the courtyard of the Louvre museum in Paris, France, during the May 7 election.

The far-right, immigrant-bashing bigots in Europe and elsewhere who had hailed the election of Donald Trump in the United States didn’t get a repeat of that scenario in the May 7 French election.

But the denizens of the Bourse, the French equivalent of the New York Stock Exchange, did get what they wanted, as did the capitalists oriented toward the European Union.

There are two rounds in France’s presidential election process. Many parties participate in the first round; then the two with the most votes compete in the second. The election took place as the two establishment parties of the French ruling class had sunk to their lowest point in years. This time, neither the so-called Socialist Party nor the Republicans, the two parties that have dominated French politics for decades, made it to the second round.

Instead, Emmanuel Macron, a 39-year-old banker and defector from the Socialist Party, ran against Marine Le Pen, whose National Front has a long history of anti-Semitism and far-right demagogy aimed at turning the anger and frustration of those hurting economically against French citizens of color and all immigrants.

Jean-Luc Mélenchon, a left-social democrat who appealed to many workers, got almost as many votes as Le Pen in the first round, but not enough to put him in the runoff against Macron.

The final vote, according to the Interior Ministry, was 66.1 percent for Macron to 33.9 percent for Le Pen. Of special note is that 25 percent of the electorate did not vote, the lowest turnout in half a century. Of those who did vote, 12.3 percent deliberately cast blank ballots as a protest over the choices available — a record high.

There can be no doubt that the French ruling class swung behind investment banker Macron, who has never held elected office before, when it became clear the establishment party candidates had no chance. In the first round, Macron had been only two percentage points ahead of Le Pen, but his new party, En Marche!, was then endorsed by leaders of the SP, including former Prime Minister Manuel Valls.

Le Pen was hoping that the uproar over terrorism would propel her campaign, and it undoubtedly did help win her the votes to make it to the second round. The National Front won an historic high number of votes in the second round and remains a threat. But in the end the voters rejected the National Front and its attacks on immigrants by nearly two to one.

However, the high number of abstentions and blank ballots must also be seen as a protest against both the racism of Le Pen and the pro-big-business program of Macron.

Unemployment stands at 10 percent in France. The capitalist establishment blames it on the guarantees that French workers have won over many decades of struggle, such as a 35-hour work week, long vacations and better job security than most other capitalist countries. Macron wants to cut back these gains, claiming that the economy will boom once businesses have been “unleashed.”

But most workers in France don’t buy that. Hence the dilemma when voting in the second round — a choice between a rock and a hard place — and the high rate of abstentions and blank ballots.

Analysis of the election results showed that while the leftist Mélenchon got the most votes from unemployed workers in the first round, most of those voters did not come out for Le Pen in the second. Especially in the big cities, including Paris, they rejected her demagogy that blamed unemployment on immigrants. (The Guardian, May 8)

Political struggle among various ruling-class factions for their share of the spoils is sure to continue, especially as Macron’s new party has no seats in the National Assembly and will have to make deals with the other capitalist parties to get any legislation passed.

For the working class, the immediate threat from the far right is lessened, and the field is open for intensified class struggle against both the bosses in the workplace and the government that is so clearly under the control of big capital.