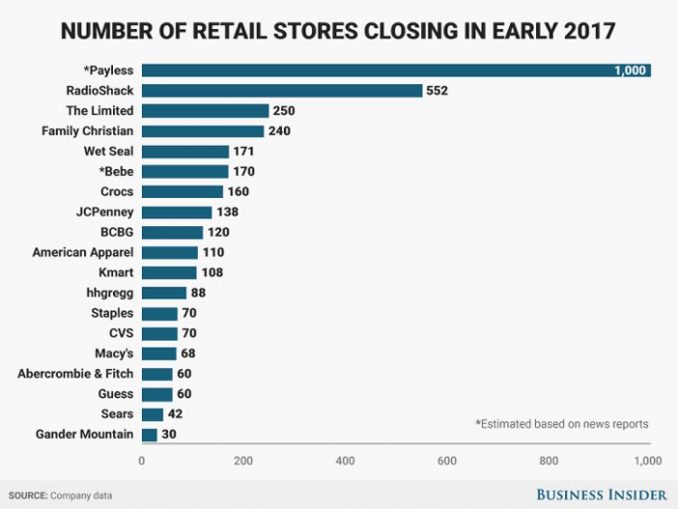 The restructuring in retail is different in form from manufacturing but the same in essence, as far as the working class is concerned.

As International Workers’ Day — May Day — approaches, a major crisis is underway for retail workers in the U.S. A process of profound restructuring of the retail industry is unfolding. Driven by internet technology and its utilization by Amazon, among others, it has been made possible by the capitalist scientific-technological revolution.

In manufacturing, the struggle by big industry to increase profits drove automation and offshoring. In the retail industry, the giant monopoly Amazon has developed online shopping, which has already wiped out tens of thousands of retail jobs and is threatening hundreds of thousands more.

Online shopping has brought about a transformation in the so-called brick-and-mortar retail industry.

“More workers in general merchandise stores have been laid off since October, about 89,000 Americans. That is more than all of the people employed in the United States coal industry, which President Trump championed during the campaign as a prime example of the workers who have been left behind in the economic recovery.

“The job losses in retail could have unexpected social and political consequences, as huge numbers of low-wage retail employees become economically unhinged, just as manufacturing workers did in recent decades. About one out of every 10 Americans works in retail.” That’s around 15 million workers.

Thousands of mall-based stores are shutting down in what’s fast becoming one of the biggest waves of retail closures in decades.

More than 3,500 stores are expected to close in the next couple of months.

Department stores like JCPenney, Macy’s, Sears and Kmart are among the companies shutting down stores, along with middle-of-the-mall chains like Crocs, BCBG, Abercrombie & Fitch and Guess.

As big retailers shut down in malls, there is collateral damage among the workers in small retail stores and fast food places that draw walk-by customers who shop in the big stores. Furthermore, window designers, lighting and maintenance workers, security guards, sanitation workers and many other mall workers are or will be thrown onto the unemployment lines.

From housing bubble to retail bubble

Online shopping is not the only thing responsible for the present crisis. Marxism teaches that in all industries, capitalist competition and the thirst for profit drive the retail and real estate bosses who rent to them to destroy their rivals by capturing market share. The result is capitalist overproduction. (Overproduction does not mean that capitalists produce more than people need, only more than the stores can sell at a profit.)

“The number of malls in the U.S. grew more than twice as fast as the population between 1970 and 2015, according to Cowen Research. By one measure of consumerist plentitude [capitalist overproduction, F.G.] — shopping center “gross leasable area,” the U.S. has 40 percent more shopping space per capita than Canada, five times more than the U.K., and 10 times more than Germany.” (theatlantic.com, April 10)

“The seeds of the industry’s current turmoil date back nearly three decades, when retailers … flush with easy money, rushed to open new stores. The land grab wasn’t unlike the housing boom that was also under way at that time.

The standard line of the apologists for capitalist restructuring is that technological advancement creates new and better-paying jobs that will make up for the job losses. This is complete hogwash.

First of all, the workers who lose their jobs are out of a job NOW. They have the skills and training for retail. The capitalist class and the capitalist government do not swoop in to the rescue and give them jobs and training in new occupations they would feel suited for.

But second of all, assuming that the laid-off workers in the thousands could apply for jobs at Amazon or other online retailers, they would be confronted by the highly automated Amazon warehouse system. This system has far fewer jobs to offer than the 90,000 who have already been laid off since last October and the many thousands more who are in danger of losing their jobs.

Amazon’s automation is infamous among the workers as a speed-up device and a job-killer.

“In 2012, Amazon bought the robotics company Kiva Systems for $775 million — and made it so Kiva’s technology could be used only in Amazon warehouses. These Kiva robots autonomously zoom around the warehouse using a series of barcodes on the floor to guide them, picking items and bringing them back to warehouse workers. These robots save these workers from the immense physical toll of walking as many as 20 miles per shift, sometimes in unbearable heat; but this also means that fewer human workers are needed. The jobs that remain will be less labor intensive, and more like those of a robot supervisor. Since Amazon bought Kiva, a host of other companies are trying to develop even more advanced warehouse robots and sell them to Amazon’s competitors.” (prospect.org, Sept. 27, 2016)

It’s not likely that 90,000 robot supervisors will be needed at Amazon!

Capitalist restructuring in another form

Retail workers have already undergone the pressure of the scientific-technological revolution and the intensified exploitation that it brings. Retail salespeople and cashiers have been subjected to time studies and forced to adhere to a time standard for making sales. Cashiers have to ring up customers in a designated time tracked by the electronic cash register. And they have been subjected to many other profit-squeezing methods.

Now thousands of them are being eliminated altogether by internet technology and online sales.

The difference is that this automation is being instituted by an external employer, Amazon. The restructuring in retail is different in form from manufacturing but the same in essence, as far as the working class is concerned. Amazon has reduced the necessary labor time involved in the process of commercial retail sales. As such, it can sell at lower prices and increase convenience for the shopper.

While automation reduces the walking time for workers in the warehouse and the burden of shopping for the consumer, the workers who are no longer needed by capital under the profit system suffer. Instead of the internet and robots being used to ease life for the working class, they are only making things more difficult and insecure.

The masses of workers who lose their jobs will not be able to afford buying anything, either online or in a store. For the working class, the whole capitalist system is a trap the workers must break out of.

Goldstein is the author of Low-Wage Capitalism and Capitalism at a Dead End, which can be obtained from online book sellers.