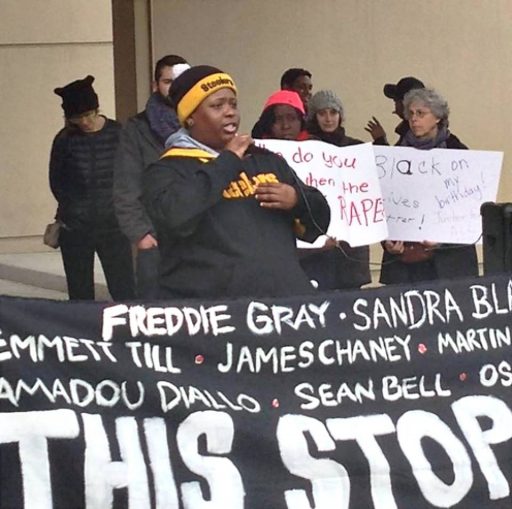 Syracuse Black Lives Matter launched another year of resistance to cop abuse, racism and the criminal injustice system with an April 3 “Rally for Justice.”

The most recent impetus for the BLM protest was the hit-and-run killing of a young worker by an investigator for Onondaga County District Attorney William Fitzpatrick. The DA has been quick to label arrested 16-year-old youths as “violent thugs” and condemn them to solitary confinement. But when his investigator Peter Rauch ran down and killed an 18-year-old student walking home from his fast food job, Fitzpatrick’s only comment was that he “felt betrayed” by Rauch. (Syracuse Post-Standard, March 26)

BLM has exposed the DA’s steady refusal to condemn or adequately prosecute malfeasance by local cops and related “injustice” personnel. In particular, BLM has brought forward the case of Maleatra Montanez, an African-American mother raped by a gun-carrying, on-duty cop in her home, in front of her infant son, after she called 911 for assistance. The cop, Chester Thompson, who is white, was allowed to receive his pension and walk free after the DA charged him with a simple misdemeanor.

Organizer Rahzie Seals spoke of her own experiences with police brutality, including the death of her cousin, Johnny Gammage, at the hands of Pittsburgh cops. Though his death was ruled a homicide, the prosecution of the killer cops ended in a mistrial.

Seals herself was injured by local Syracuse cops when she objected to the racist profiling of a teenage neighbor. “When the most marginalized and oppressed among us is free, we will all be free,” Seals said.

BLM ended the rally with a recitation of names of local people who still need justice, including Sheena Jenkins, a woman sent to jail for “rioting” because she attempted to help a man shot by cops as he lay dying; mothers who have lost children to police brutality; and other as-yet-unknown victims.