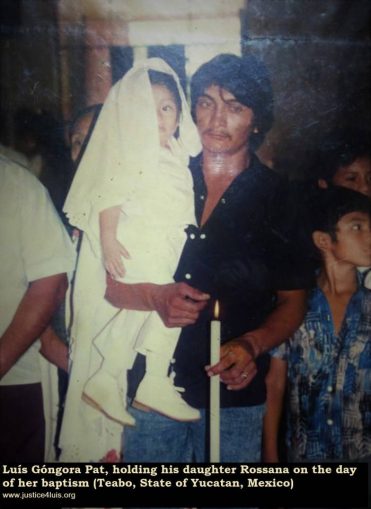 San Francisco – April 7 marked one year since the police assassination of Luis Góngora Pat, a 45-year-old Yucatecan Mayan immigrant restaurant worker in the Mission District of this city.

Luis Góngora came to the U.S. from Mexico in 2004. He helped to support his wife, parents and three children in the small town of Teabo, Yucatan, Mexico, by sending remittances from his earnings as a restaurant cook and dishwasher in San Francisco.

An angered, sorrowful community commemorated the anniversary at the spot where Góngora was riddled with police bullets, execution-style, as he sat on the sidewalk near the tent he’d lately been calling his home.

Led by Aztec dancers and drummers, protesters marched to the Mission Police Station. That’s where Cristina Gutiérrez and four others began a 17-day hunger strike in April 2016 to condemn the seemingly endless string of police killings of Black and Brown people in this rapidly gentrifying city. Gutiérrez decried the fact that District Attorney George Gascón has not prosecuted a single one of these killer cops.

The “Frisco Five” hunger strikers had only one demand: Fire Greg Suhr, the police chief who for five years had been crying crocodile tears while justifying every police killing of a Black or Latinx person. For five years, Suhr was vigilantly protected by the mayor, the media, the labor leadership and the city’s ruling Democratic Party political establishment.

The de facto policy of the Democrats seems to be no prosecution for killer cops. However, a militant grass-roots campaign spearheaded by the Frisco Five finally did succeed in forcing out Chief Suhr, less than a month after the Góngora murder.

The third stop of the “Justice for Luis” procession was the residential hotel where Góngora had been living until he was illegally evicted and forced to live on the street. “They pretend that this is a sanctuary city but that’s a lie,” said Bilal Ali from the Coalition on Homelessness. “If you’re an immigrant in San Francisco and homeless, there is no sanctuary here.

“McCoppin Park here used to be a refuge for people without a home, where you could lay your head without fear of being harassed or beaten by the Blue Klux Klan,” said Ali. “Now, they’ve put a high fence around the park. That’s how they entrap people, forcing them out into the street where they can be abused or killed. This city spends $20.7 million to criminalize and brutalize and drive out homeless people.”

Gloria Esteva, from Causa Justa/Just Cause, said, “We need to braid together our many different struggles, small or large, so we can bring down the monster of injustice that is hurting all of us.”

“We are not only advocating against police brutality and murders,” emphasized Laura Guzman, director of homeless services at Mission Neighborhood Health Center, “but also that this city is promoting racist and ethnic cleansing and houselessness” in the Mission and throughout the city. “No one is homeless by design,” she added, calling for “a massive program to provide immigrant housing.”

Góngora’s cousin, Luis Poot Pat, said in Spanish, “My cousin suffered many injustices to get to this sanctuary city, only to face more cruelty here. He suffered poverty, forced migration, low wages, illegal eviction, homelessness and discrimination, only to be killed by an act of senseless police brutality in less than 30 seconds.”

Góngora’s family in Teabo wrote a statement that was read on the steps of City Hall: “Today marks a year since the death of Luis, our beloved father, an exemplary father, a great son and a great husband, whom the San Francisco police took away from us. The culprits are still free. How is that possible in a city like San Francisco? All we ask is justice for our father.”