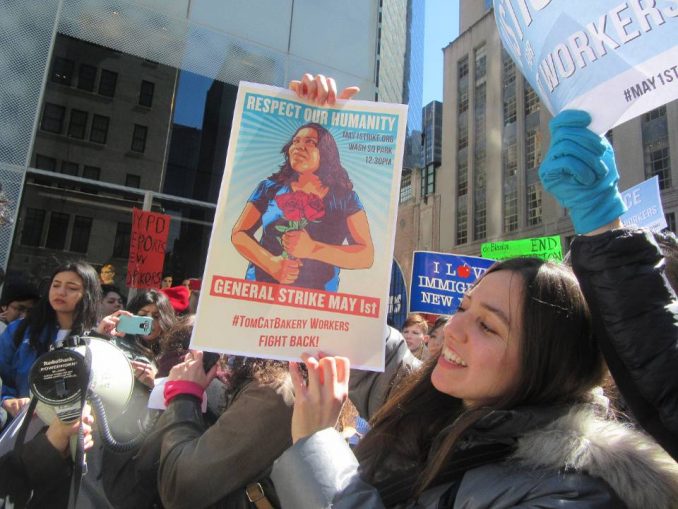 Dozens of immigrant workers at Tom Cat Bakery will soon face auditing by Trump’s anti-immigrant Department of Homeland Security. With a history of standing up for their rights, these workers, who bake New York City’s bread, decided to call a protest rally.

Homeland Security had flagged the workers for not having filed “the proper forms.” The bakery owners gave workers a brutal ultimatum: if they couldn’t come up with the forms in 10 days, they would be fired, without severance pay. Some have worked at the bakery for over 20 years.

With support from Brandworkers, a food and retail workers’ rights organization, the bakery workers showed up April 8 at Trump Tower in Manhattan. They were chanting “Whose city? Our city!” Many of their signs said, “Respect our humanity!”

The Tom Cat bakery workers are putting out a call to each and every ally who is opposed to racist scapegoating. They ask supporters to join together to demand justice for them and other immigrants, including at national May Day events.

The workers are connected to Brandworkers as part of the Food Chain Workers Alliance, a key member of Beyond the Moment. This broad coalition is calling for militant worker actions on May Day 2017. The coalition includes the Movement for Black Lives and Movimiento Cosecha, which fights for undocumented workers (foodchainworkers.org).

The call for “All Out for May Day!” echoed in the chants of the protest: “¡El pueblo unido jamás será vencido! The people united will never be defeated!”