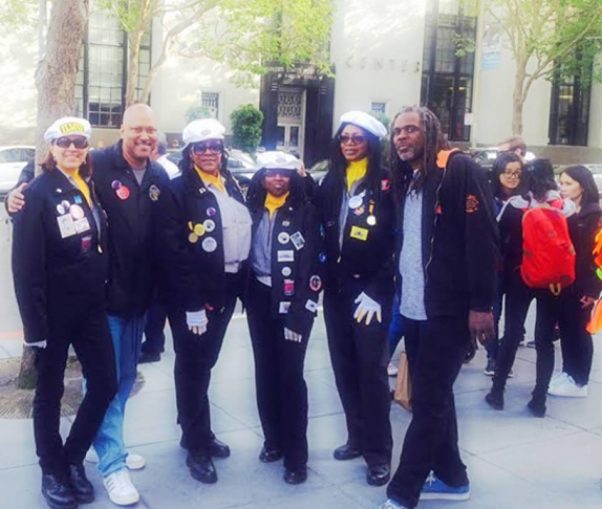 San Francisco — A confident, unified workers’ movement — that’s who was marching here on the April 4 anniversary of the assassination of Dr. Martin Luther King Jr.

Spearheading the march were militants of United Service Workers West (USWW-SEIU) — the janitors, airport employees and other mainly low-wage workers playing a leading role in building for May Day general strike actions in California.

A Black woman homecare provider said, “We stand on the shoulders of Dr. King and our other heroes. But what we’re building is a legacy of our own!”

A USWW worker shouted, “Shut down the union busters, and that includes the biggest union buster of them all: Trump!”

The emcee at the rally, a young man from Nigeria, emphasized, “We’re fighting for $15 and a union, but that’s just a first step toward living wages and a just society.”

Robbie Clark, of Black Lives Matter Bay Area and Causa Justa/Just Cause, explained, “Today is the 50th anniversary of Dr. King’s 1967 ‘Beyond Vietnam’ speech at Riverside Church in New York. And yet by any measure — wages, family income, unemployment, homelessness, levels of incarceration — people of color are falling further and further behind.

“That is why over 50 organizations have formed a new coalition called ‘The Majority’ — because people of color are the majority — to oppose white supremacy, to promote Black and Brown unity, to fight for international solidarity not militarization, to fight for community needs not gentrification and displacement,” Clark said.

The march kicked off at the King Memorial at Yerba Buena Park, moving down Mission Street to the spot where two waterfront workers were killed and scores injured by police during the West Coast Maritime Strike, the incident that sparked the San Francisco General Strike of 1934.

Derrick Muhammad, secretary-treasurer of International Longshore and Warehouse Union Local 10, primarily a dockworkers union, pointed out that on a visit to that union’s hiring hall in San Francisco, Dr. King had been voted in as an honorary member of the local.

“When they killed our beloved brother in 1968,” said Muhammad, “he was awakening the masses of the people — and the rulers of this country were very frightened by that. Official documents have revealed that Cointelpro was consciously seeking to prevent the rise of a so-called ‘Black messiah’ who could unify our people. Now, today, we are still facing the same racist system, the same oppression.”