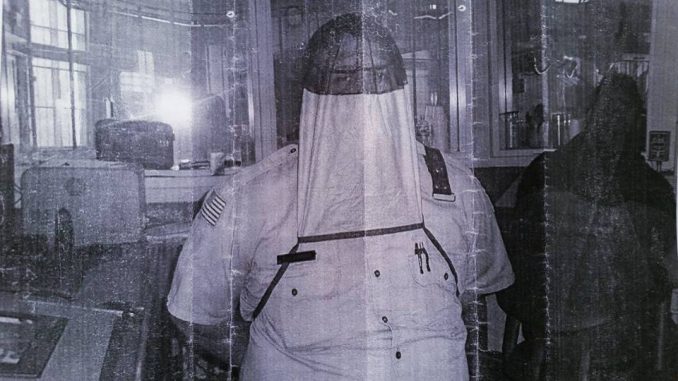 Asphyxia: (1) stopping of the pulse (2) lack of oxygen, (3) excess carbon dioxide in the body that results in unconsciousness and death, (4) caused by interruption of breathing or inadequate oxygen supply.

Revolutionary greetings to all the workers worldwide! The above definitions describe a condition that too often occurs in U.S. torture sites (prisons/slave plantations) across the nation when human beings are suffocated by what is commonly called “spit mask” by torturecrats (prison officials).

Even though the United States allows domestic torture centers inside its borders of 50 states and U.S. territories, this is somehow conspiratorially blocked out of U.S. corporate media outlets — newspapers and especially television.

For most of the public, everyday working-class people have never heard of such a thing as a “spit mask,” never alone even seen one in their lifetime.

Here, for what is probably most likely the first viewing for many, is a photo of the white spit mask as displayed by a torturecrat.

The white square cloth division of the mask covering the lower nostril holes causes one to suffocate.

The black knitted thread division of the mask (at the top of the face and head) is used for masking prisoners. It is pulled back with the torturecrat’s palms flat down on it in such a fashion that the white cloth part is fully blocking the prisoner’s entire face. This allows the torturer to control air flow. In some cases this is used while prisoners are in the torture chair and in other cases while they are shackled and belted in full body restraints.

It is not uncommon for vomiting, epileptic seizures, panic attacks and anxiety attacks to happen to the prisoner. When Tased or beaten, no prisoner is able to identity the torturers because viewing is obstructed by the mask.

The combination of the torture chair with the torture hood means many have suffered from pulmonary embolisms, and some died from blood clots caused by trauma, followed by the immobility in the torture chair. (Prison Legal News, Oct. 14, 2016)

In other cases nationwide, the white mask serves as a torture hood and creates “positional asphyxia” — the restriction of airflow during breathing causing suffocation.

In spite of many deaths across the U.S., there is a media block-out. There is also the complicity of lawyers who never protect the victims, despite their knowledge of systematic abuses across the spectrum. The tortured include minorities, LGBTQ individuals, people with physical and mental disabilities, and all races and religions and atheists.

The reason professional lawyer groups are silent is because prison plantation cases are not profitable since the Prison Litigation Reform Act (signed into law under ex-president William Jefferson Clinton) put a cap on attorneys’ representing prisoners for financial rewards. This act also made it more difficult for prisoners because they must first establish physical injury before any psychological injury can be compensated.

This article does not intend to make a complete generalization that includes the National Lawyers Guild and other peoples’ lawyers groups and individuals in private practice, but for the most part applies to the American Bar Association and definitely law schools. Lawyers in Pennsylvania particularly are the absolute worst nationwide, including Pennsylvania members of the National Lawyers Guild.

One of the most horrendous deaths imaginable, choking to death while gasping to live, brings to mind how Eric Garner was choked to death by torturecrats. There were and still are protests as remembrance; often there are text hashtags, and demonstrations with signs “I can’t breathe” have been national news.

This writer has yet to ever see or hear one corporate news story about being choked to death in U.S. prisons — from Office of Corrections chemical munitions to the torture hood causing asphyxias.

Alleged terrorist suspects were hooded and brought to Guantanamo Bay and other torture sites, so the U.S. operates torture worldwide, as reported in international news about “extraordinary rendition.” All kinds of lawyers, civil rights groups and human rights organizations have petitioned all the way to the U.S. Supreme Court about U.S. detention and torture injustice.

Inside the U.S., Black people in prisons who are the majority in local, state and federal concentration camps — neo-slave plantations — die daily of asphyxia and other state-sponsored deaths.

I write to remind the movement globally that the U.S. and its states did not stop unjust executions after Julius and Ethel Rosenberg [1], did not stop sadistic torture with Albizu Campos [2], did not stop assassination with George Jackson at San Quentin prison. Dr. Mumia Abu-Jamal is still under a state-sponsored death-by-incarceration sentence. Sandra Bland was made dead before her day before any court. Of course, Black Lives Matter now, but do Black Lives Matter in prison? For that matter do any lives matter in prison?

So with this article and your viewing of yet another torture device, I ask workers and readers to ponder what asphyxia is like and when does this all end — the senseless wars, the greedy wage exploitation of labor, the daily killings, the endless torture and the perpetual slavery? Or is humanity just in a doomed cycle of death by asphyxia?

[1] The Rosenbergs were falsely convicted and executed by the U.S. government for allegedly “stealing” atom bomb secrets.

[2] Albizu Campos was a leader of the Puerto Rican independence movement who was tortured during imprisonment for 26 years and died shortly after being released.