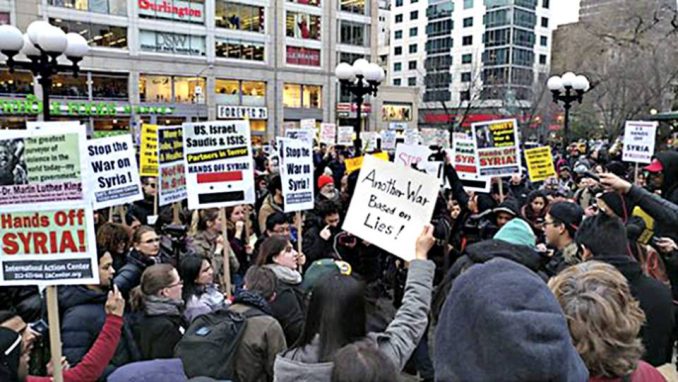 The New York Times and other major corporate U.S. news outlets rushed to accuse the Syrian government of President Bashar al-Assad of being responsible for the scores of people who died from poison gas in Idlib Province in Syria on April 4.

Meanwhile, working people in the U.S. were commenting: “We’ve heard this before — weapons of mass destruction!” They were referring to the U.S. lies about Iraqi President Saddam Hussein, which were used to justify the imperialist invasion of that country in 2003.

Republicans and Democrats joined in cheerleading Trump’s decision to unleash bombing raids on Syria as “reprisal” against Assad.

But as U.S. cruise missiles rained down terror, working people were posting bafflement on social media about a president who says he has sympathy for the Syrian people, and then simultaneously bombs them and denies them entrance to the U.S. as refugees.

It turns out, not surprisingly, that people’s skepticism is well justified.

In an April 7 Consortium column, investigative reporter Robert Parry reveals that on-the-ground intelligence sources are “saying the preponderance of evidence suggests that Al Qaeda-affiliated rebels were at fault, either by orchestrating an intentional release of a chemical agent as a provocation or by possessing containers of poison gas that ruptured during a conventional bombing raid.”

Parry is an investigative reporter who broke much of the 1980s Iran-Contra scandal for the Associated Press and Newsweek. He quotes the rejection of the Assad government’s responsibility by former CIA officer Philip Giraldi: “I’m hearing from sources on the ground in the Middle East, people who are intimately familiar with the intelligence that is available, who are saying that the essential narrative that we’re all hearing about the Syrian government or the Russians using chemical weapons on innocent civilians is a sham.”

Even the former British ambassador to Syria, Peter Ford, says President Assad’s government is not responsible for the chemical weapons deaths, that it would have no advantage in such an action. Ford considered the accusation more likely to be “fake news,” manipulated by al-Qaida-like forces to provoke a U.S. intervention and reverse the policy that the Trump administration had just announced. (Sky News, April 7)

Questions abound about the “rescue” visuals of those horribly suffering from the chemicals. Much of the video footage and accompanying narrative were provided by anti-Assad forces. The most notorious of these groups is the “White Helmets,” who have been linked to al-Qaida and similar organizations cooperating with the U.S. against the Damascus government.

Others are the Syrian-American Medical Society and the Aleppo Media Center, which also have a history of providing outright duplicitous information. Corporate news reporting on Syria, such as from the BBC, CNN or Associated Press, relies exclusively on information from anti-Assad “opposition activists” and “opposition media agencies.” (Patrick Henningsen, “Reviving the Chemical Weapon Lie,” 21stcenturywire.com, April 4)

Former U.N. weapons inspector in Iraq Scott Ritter, writing for Huffington Post on April 9, pointed out: “Mainstream American media outlets have willingly and openly embraced a narrative provided by Al Qaida affiliates whose record of using chemical weapons in Syria and distorting and manufacturing ‘evidence’ to promote anti-Assad policies in the west, including regime change, is well documented. These outlets have made a deliberate decision to endorse the view of Al Qaida over a narrative provided by Russian and Syrian government authorities without any effort to fact check either position.”

The “chemical weapon lie” is reviving the 2013 lie holding the Assad government responsible for a sarin gas attack that killed hundreds in Damascus.

Pulitzer-prize-winning investigative journalist Seymour Hersh also debunked that “fact.” Hersh linked the 2013 attack to Turkish intelligence forces and al-Qaida-affiliated jihadists. However, true to their role as an arm of the repressive imperialist state, the New York Times and other major U.S. news outlets continue to repeat the “chemical weapon lie.”

The fact is that the Syrian Arab Army of the Assad government has been winning the war against the Islamic State group and the U.S.-backed “rebels.” There was no strategic, political or military reason for the army to mount a deadly chemical attack.

Instead, there are many reasons the Trump administration’s military advisors would try this “shock and awe” move. Trump has won praise from the ready-to-bomb Democrats and war-hawk critics. They commend him for “standing up” to Russia. And he implies that if he can bomb Syria, he can bomb ____. Fill in the blank, but start with the Democratic People’s Republic of Korea.

Meanwhile, military procurement contracts have fattened, stock values of the arms industries have soared, oil prices went up in the “uncertainty” and big business rubs its hands with glee.

Meanwhile, But the good news is that the people are in the streets, shouting: “We’ve been down this road before! Stop the war! Hands off, Syria!”