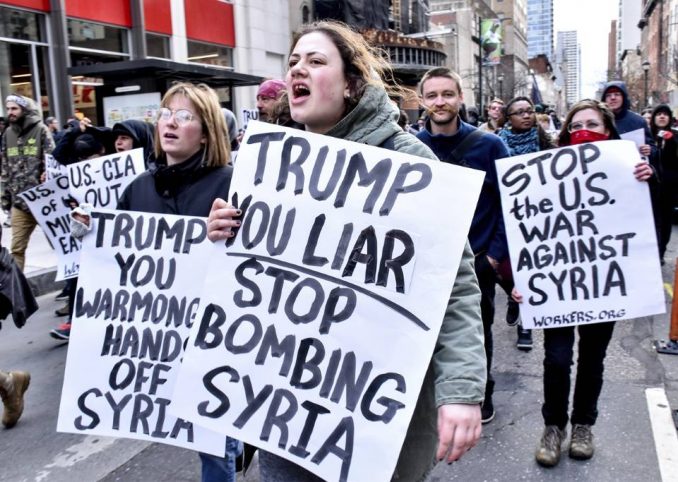 “You furnish the pictures. I’ll furnish the war.” Publisher William Randolph Hearst in 1898, preparing the groundwork for the U.S. war with Spain and seizure of Cuba.

The Trump administration’s attack on the Syrian air force was first directed at Russia as well as the government of Bashar al-Assad. China and the Democratic People’s Republic of Korea were secondarily targeted.

The chemical weapons attack in Syria, assuming that it was not totally staged by enemies of the Damascus government, was aimed at forcing President Donald Trump to shift his political orientation away from rapprochement with Russia — and to keep military pressure focused on the long-term goal of overthrowing the Assad government. Washington not only wants to overthrow Assad, but it also aims to place a compliant government in Damascus that will oust the Russians from Syria and the Mediterranean altogether.

Charges with no evidence

The accusations against the Assad government have been unanimous and thunderous in the capitalist media, Congress and the military. All this has gone on despite there being not one moment of investigation or one element of cogent proof that Damascus had any role in the alleged attack. The Syrian government has categorically denied the charges, but its denials have received no publicity in the capitalist media.

In all, this one thing is certain: The Syrian government had no reason to carry out such an attack. It has been winning the war without using chemical weapons and has the least motive of all parties involved to carry out such an attack. The attacks hurt the Syrian government and helped the imperialists and their reactionary client groupings inside Syria.

In any criminal investigation the first things to look for are motive, means and opportunity to carry out the crime. The parties with the overriding motives, means and opportunity to do such a thing are the U.S. government and the reactionaries in Syria who are losing the war. Those in the latter group have been unsuccessfully trying to overthrow Assad and seek to draw the U.S. government into the military struggle.

The New York Times led the charge in instantaneously accusing the Assad government. The Times assigned their two most committed anti-Syrian-government propagandists to cover the story — Michael Gordon and Anne Barnard.

Gordon was co-author with Judith Miller of Times articles promoting the idea that Iraq had weapons of mass destruction in the build-up to the 2003 U.S.-British invasion. Miller eventually lost her job for lying about claims of the existence of these weapons in Iraq. George W. Bush used these claims to bolster the pretext for invasion. Barnard writes like a publicist for the reactionary Syrian groups.

Progressive writer and founder of consortiumnews.com Robert Parry explained on April 5: “Gordon has been at the front lines of the neocon ‘regime change’ strategies for years. He co-authored the Times’ infamous aluminum tube story of Sept. 8, 2002, which relied on U.S. government sources and Iraqi defectors to frighten Americans with images of ‘mushroom clouds’ if they didn’t support President George W. Bush’s upcoming invasion of Iraq.”

It turned out that the aluminum tubes were meant for conventional weapons.

Seymour Hersh, an investigative reporter who exposed the 1968 My Lai massacre in Vietnam, reported in 2015, “In spring 2013 U.S. intelligence learned that the Turkish government, through elements of the MIT, its national intelligence agency, and the Gendarmerie, a militarised law-enforcement organisation, was working directly with al-Nusra and its allies to develop a chemical warfare capability.”

Hersh continued: “Our senior military officers have been told by the DIA [Defense Intelligence Agency] and other intelligence assets that the sarin was supplied through Turkey, that it could only have gotten there with Turkish support. The Turks also provided the training in producing the sarin and handling it.” (reported by Robert Parry, consortiumnews.com, Sept. 16, 2015)

Following the chemical gas attack in 2013, the Times reported that experts followed the path of missiles carrying the gas, and it led back to Damascus. It later turned out that the missiles had a range that could not have carried them from Damascus. The actual range was the distance from rebel-held territory. (consortiumnews.com, Dec. 29, 2013; linked to Times article)

Even during the U.S. election campaign and since Trump won, the Pentagon and the ruling class in general have aimed to undermine the Trump administration’s attempt to shift U.S. foreign policy toward more cooperation with Russian President Vladimir Putin. The horrendous pictures of the alleged chemical attack in Syria were calculated to box Trump in and leave him no alternative but to attack the Syrian government.

The drumbeats for attack on Syria came relentlessly from almost all ruling-class quarters — from Democratic Party moderates to Republican reactionaries. Trump, who has been the butt of attacks, ridicule and jokes in the corporate media, was momentarily catapulted from the status of bungling buffoon to the position of decisive leader. This praise, however, is only temporary. The military and its mouthpieces in Congress, such as Senators John McCain and Lindsey Graham, are prodding Trump to go further and explain what’s next.

In all the celebration about Trump’s sudden show of leadership, what is being omitted is that he has militarized the government at the top. He received much praise when he pushed Stephen Bannon off the government’s most powerful committee, the Principals Committee of the National Security Council.

Bannon is an ultra-right extremist with an apocalyptic vision of war in Asia and is viciously against Islamic civilization. But the cheers for Bannon’s removal have drowned out any response to the shift in the Principals Committee. Now there are four generals on the council — who are nothing but extremists with weapons.

Under Trump the top foreign policy body of the capitalist government has gone from having the facade of civilian rule to open military control of foreign policy. The attack on Syria must be seen in that light.

Trump’s secretary of defense is James “Mad Dog” Mattis, a former Marine general. Mattis oversaw Middle East operations as chief of Central Command until his retirement in 2013. Mattis’ many colorful quotes include, “Be polite, be professional, but have a plan to kill everyone you meet.”

Mattis opposed President Barack Obama’s Iran deal. He led the attack on Fallujah in 2004, which destroyed this Iraqi city of 300,000 people. The campaign used poisonous and radioactive depleted uranium munitions and caused massive civilian casualties. His troops massacred 24 civilians in Haditha city in 2005. (democracynow.org, Jan. 26, 2012) Mattis refused to apologize. He has been a true military extremist.

The head of the Department of Homeland Security is retired Marine Maj. Gen. John Kelly, a border security hawk who was in charge of Caribbean and South American operations as head of the U.S. Southern Command. He opposed Obama’s plans to close Guantanamo Bay prison and has stoked fears by raising the specter of terrorists entering the country through the U.S.-Mexican border.

Trump’s national security adviser is Army Lt. Gen. H.R. McMaster, who is still on active duty and is a former tank commander in Iraq and Afghanistan. McMaster replaced Marine Gen. Michael Flynn after Flynn was ousted. McMaster played a key role in expelling Bannon from the NSC Principals Committee. The military unseated Bannon, the ultra-right ideologue, to prevent him from interfering with or listening in on their plans.

Also on the committee is Marine Lt. Gen. Joseph Dunford, chair of the Joint Chiefs of Staff. He was a commander during the 2003 invasion of Iraq and a commander of NATO forces in Afghanistan in 2013. He told the Senate Armed Services Committee in 2015 that Russia is the “greatest threat to U.S. interests.” (Washington Post, July 9, 2015)

The U.S. military plans to have a wide focus that includes Russia, China, the DPRK, Syria, Iran, Yemen, Somalia and Libya. They especially strive to maintain hostility to Russia now because Washington covets Ukraine and is outraged that the Russians moved quickly to frustrate a total imperialist takeover of that country. The Pentagon is a firm backer of the fascist regime in Kiev and plans to feed it more powerful weapons. This is all linked to its anti-Russian campaign.

Washington to Putin: We’re the boss

Last year and at the beginning of this year, a joint Russian, Turkish and Iranian task force discussed political settlement issues for the Syria conflict at talks in Astana, Kazakhstan.  (Reuters, Feb. 16) The U.S. had no part in the talks.

Washington and the U.S. military reject the political involvement of the Russian government in settling the Syrian question. U.S. air strikes on the Syrian airbase were meant to show Putin who is boss in the region.

The same scenario was played out in 2016 when then-Secretary of State John Kerry was engaged with Russian Foreign Minister Sergey Lavrov in working on military coordination and peace talks about Syria. After a marathon negotiating session on Sept. 8, Kerry called the deal “a potential turning point” in the conflict, if implemented. (CNBC, Sept. 9, 2016)

However, barely a week after Kerry’s announcement, the New York Times reported on Sept. 17: “The United States acknowledged on Saturday [Sept. 17] that its warplanes had carried out an airstrike in Syria that resulted in the deaths of Syrian government troops. American military officials said the pilots in the attack, in the eastern province of Deir al-Zour, believed they were targeting the Islamic State.”

The article stated, “Russia’s defense ministry said the United States attack had killed 62 Syrian troops, wounded 100 more.” This attack broke up the talks and all possibility of working out a peace plan.

The military rushed the U.S. attack on Syria in order to deliver a major diplomatic slap at the People’s Republic of China at the very moment when Chinese President Xi Jinping was meeting with Trump at his Florida White House. Trump did not tell him about the attack until the meeting was over.

The strike was also meant to threaten the Democratic People’s Republic of Korea. To follow up the strike on Syria, the Pentagon is now sending an aircraft carrier strike force toward Korean waters. The carrier Carl Vinson, accompanied by missile ships and frigates, is steaming there from Singapore to arrive in time for the 105th birthday of historic Korean communist leader Kim Il Sung. April 15 is celebrated in the DPRK as “the day of the sun.”

Trump has given the military a long leash. He is fostering their revenge plans against the DPRK, which defeated the U.S. invasionary force in the Korean War. The U.S. military has never gotten over it.

Trump has let the Pentagon send more troops to Syria, bomb large numbers of civilians in Mosul and increase drone strikes in Yemen and Somalia — all without the White House signing off on these operations. There has been a major escalation of U.S. military killing of civilians under these new rules.

By militarizing the government, Trump has given more priority to the Pentagon and U.S. imperialism’s losing battle to overcome Washington’s diminished position in the world. Trump’s foreign policy slogan is really: “Make the U.S. military empire great again.” But this authoritarian, racist, misogynist, bigoted buffoon has no other talent than to bluster about giving orders. He cannot see that this dangerous course can only end in disaster for U.S. imperialism.

Goldstein is the author of Low-Wage Capitalism and Capitalism at a Dead End. Books can be purchased at several websites.