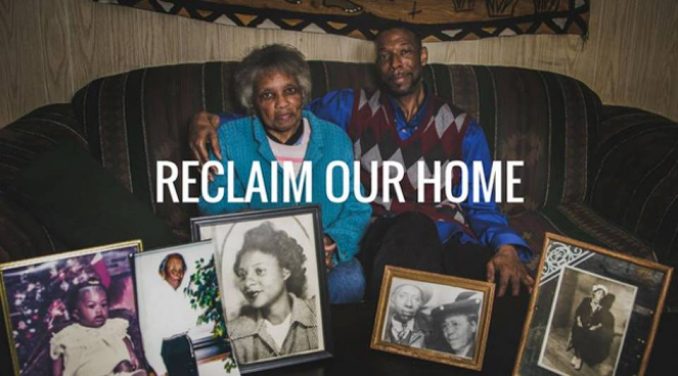 Over 60 community members and activists gathered March 29 in front of the former Oakland family home of 76-year-old matriarch Dorthy DeBose to demand its return to her.

The home had been owned by her family for over 50 years until a predatory loan was offered and payment missed. Then Michael Marr of Community Fund LLC, one of Oakland’s largest private owners of rental properties, placed an unlawful claim on the house. A crew from the Alameda County Sheriff gave Ms. DeBose ten minutes to leave her home before they changed the locks in mid-March. Marr is currently facing criminal indictment from the Department of Justice for rigging foreclosure auctions to keep house prices artificially low for his financial benefit.

Over 12,000 families, the majority Black and Brown, have been evicted from Oakland homes since 2006, many under questionable circumstances. Action attendees called Marr’s office to request a meeting and were told he was on his way, but he was a no-show.

Home occupation squads were scheduled to begin that evening to prevent Marr from coming to remove Ms. DeBose’s possessions until a meeting could take place between Marr and the family, in search of a resolution to move the family back in.

Further demands were for a community fund, and for other predatory landlords to reduce artificially inflated rents and give back some of their holdings to a community land trust in order to keep elders, children and other vulnerable, valuable, community members in their homes.

The action took place on the same day as a nearby San Francisco vigil honoring 100-year-old Iris Canada who was evicted from her longtime home for landlord profit in February and died weeks later in the hospital from related stress.