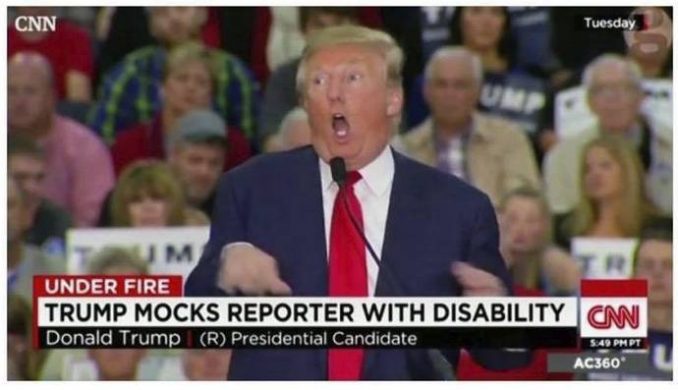 Ari Ne’eman, president of the Autistic Self Advocacy Network, warned about Donald Trump’s election as U.S. president: “It’s a disaster. … Assuming we can take him at his word on his stated policy positions, there is a tremendous risk for people with disabilities.” (Huffington Post, Nov. 10, 2016)

According to the Jan. 20 Washington Post, moments after Trump took the oath of office, the White House website page with information about federal policy on opportunities for people with disabilities was removed.

In 2005, attorney James Schottel Jr., a person with a quadriplegia disability, sued producers of Trump’s “reality” show, “The Apprentice,” for discrimination, for specifying “excellent physical” health as a requirement for appearing on the show. (usatoday.com)

In 2011, also on “The Apprentice,” Trump repeatedly called Oscar-winning actor Marlee Matlin “re***d”, an offensive term used to ridicule someone’s intellectual or developmental abilities. He directed demeaning sexual comments toward her and mocked the sound of Matlin’s voice. Matlin is deaf and uses American Sign Language to communicate. (tinyurl.com/jnte7eh)

During a 2015 rally, candidate Trump mocked and imitated the limited arm movements of New York Times journalist Serge Kovaleski, who has the disability of arthrogryposis, a condition restricting the way he moves his limbs. (Washington Post)

In response to criticism from conservative columnist and wheelchair user Charles Krauthammer, paralyzed from the waist down, Trump mocked Krauthammer, saying in July 2015: “I went out, I made a fortune, a big fortune, a tremendous fortune. … Then I get called by a guy that can’t buy a pair of pants.” (tinyurl.com/kafqcaz)

Half of people killed by cops have a disability

According to disability rights journalist, David M.Perry, whose son has Down syndrome, as many as half of all people killed by police have a disability. This includes African-American Eric Garner, who suffered from asthma and heart disease. He was killed by a New York City cop’s illegal chokehold after uttering his heartbreaking last words: “I can’t breathe.”

In his original research for the Ruderman Family Foundation, Perry notes that this was Garner’s statement to a government employee (the cop) that he needed reasonable accommodation, which is legally required to be provided under the Americans with Disabilities Act. (tinyurl.com/jk8y5f3)

Under Trump’s Department of Justice, headed by bigot Jeff Sessions, police accountability could be even more reduced, to the detriment of people with disabilities.

“Trump is the most ableist president in modern history,” Perry comments. “He takes any kind of physical or mental difference that he perceives or imagines as a weakness and uses it as a tool for dominance.” The bigoted Trump could certainly also compete strongly with his 44 predecessors as one of the most sexist, misogynist and racist of U.S. presidents.

In a 2015 Al Jazeera America article, Perry also exposed Trump’s Democratic opponents for slighting people with disabilities: “Hillary Clinton has just a brief overview of disability rights issues on her website … and in the first Democratic presidential debate, the only mention of disability occurred when Bernie Sanders responded to a question about recent mass shootings by talking about mental health. Because people with psychiatric disabilities are vastly more likely to be victims of violence than perpetrators of it, many disability rights experts find the conflation of disability with gun violence dangerous.” (tinyurl.com/m4gtqzs)

Trump’s 2016 election campaign website only discussed disability in relation to veterans. One of Trump’s “Big Lies” is that he is a great champion of veterans’ rights.

On March 17, with the Trump administration’s support, the U.S. House of Representatives passed the Veterans Administration Accountability First Act of 2017. This bill would allow VA workers to be fired arbitrarily, without any due process. It would eliminate the union grievance process as a means to appeal negative personnel actions.

David Cox, national president of the American Federation of Government Employees union, representing about three-quarters of VA workers, said: “The House has passed a venomous piece of legislation that would undermine the government’s sacred obligation to serve our veterans by gutting frontline employees’ basic worker rights at the Department of Veterans Affairs.

“Make no mistake — this legislation is not about improving accountability at the VA, and it certainly won’t improve veterans’ access to quality care and earned benefits. This is part of an orchestrated attack on the rights of federal workers and employee unions.” (tinyurl.com/lsax5ql)

Rene Imperato, a Vietnam war veteran with several disabilities, told Workers World: “My disabled veteran friends at the VA in Manhattan and I are all aware of this threat from the Trump administration to our services, and we are on high alert in the event that Trump implements these cutbacks to veterans benefits.”

Donald Trump and his extensive real estate holdings have been sued a number of times for violations of the Americans with Disabilities Act (ADA), including by James Conlon, a person with paraplegia. In 2003, Conlon complained that the buses to Trump’s Atlantic City casino were virtually impossible to access in a wheelchair and was told that there were no buses available for wheelchair users. Conlon ultimately forced a settlement out of Trump. (tinyurl.com/k7q5nm8)

A U.S. Department of Justice investigation into these cases found that Trump’s Taj Mahal was nearly inaccessible for all people with disabilities. DOJ findings included no signs indicating parking for people with disabilities in the self-park garage, bathrooms without proper Braille for visually impaired people, failure to insulate bathroom pipes to prevent harm when contacted, and counter surfaces in the buffet not at a proper height for individuals in wheelchairs.

Trump continued his attack on people with disabilities in pursuing his campaign promise to repeal the ACA — the Patient Protection and Affordable Care Act — passed in 2010.

Section 1557 of the ACA prohibits discrimination on the basis of disability in certain health programs, plans, activities or insurance marketplaces. The ACA protections against discrimination in health care — including race, color, national origin, sex and age — were not adequately guaranteed by previous federal civil right laws and, therefore, had to be enhanced by the ACA.

Fortunately, massive resistance tantamount to a rebellion stopped Trump’s threat and the so-called American Health Care Act repeal of ACA was withdrawn in Congress on March 24. The resistance included community and immigrant rights groups, workers in and outside unions, students and people with disabilities for whom repeal of ACA would have been a national death sentence.

Such positive results from resistance are far from without precedent in the disability rights movement.

On March 12, 1990, disability rights activists descended on the U.S. Capitol demanding the passage of the Americans with Disabilities Act, which expanded rights to people with disabilities. Over 1,000 protesters came from 30 states to protest for ADA. After the rally and speeches, over 60 activists abandoned their wheelchairs and mobility devices and began crawling the 83 stone steps up to the U.S. Capitol building entrance, as people loudly chanted “What do we want?” “ADA!” “When do we want it?” “Now!” Other activists remained at the bottom holding signs and giving encouragement to the crawlers.

“I want my civil rights,” Paulette Patterson of Chicago stated as she was inching her way to the top. “I want to be treated like a human being.” Eight-year-old Jennifer Keelan was famously taped while laboring up the stairs. “I’ll take all night if I have to,” she firmly stated. The second-grader from Denver had a cerebral palsy disability and decided to partake in the crawl after joining ADAPT (Americans Disabled for Accessible Public Transit). She was inspired by her friend Kenny Perkins, who passed away in January 1990. As Jennifer reached the top she stated, “I’m doing it for Kenny.” (Los Angeles Times)

Michael Winters, a leader in the Independent Living Movement, later wrote in ADAPT Narratives about the event and the reaction people had to the crawl: “Some people may have thought that it was undignified for people in wheelchairs to crawl in that manner, but I felt that it was necessary to show the country what kinds of things people with disabilities have to face on a day-to-day basis. We had to be willing to fight for what we believed in.” (tinyurl.com/l226bv6)

The “Capitol Crawl” of 1990 is seen by many present-day U.S. disability activists as being the single action most responsible for encouraging the ADA into law.