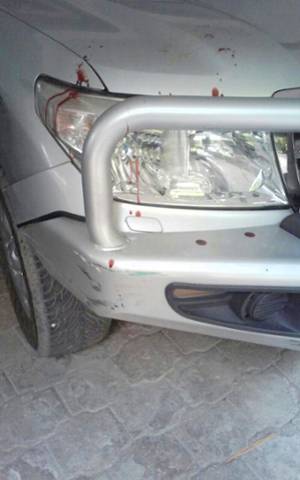 The Haitian cops claim, according to Jean Alix Pierre-Louis, a vice commissioner of police, they were just responding to the chaos that erupted March 20 in Port-au-Prince when a substantial crowd of Lavalas supporters of former Haitian President Jean Bertrand Aristide met a small group from the Bald-Headed Haitian Party (PTKH) of current President Jovenel Moïse.

Pierre-Louis charged that there was rock throwing and use of firearms from the supporters of both Aristide and the PTKH. Another police official, Prenel Duval, admitted to the web service Haiti Hollywood that the cops fired real bullets directly at the crowd in order to disperse them.

“The motorcade came under fire, and this is tantamount to an assassination attempt,” said Mario Joseph, one of Aristide’s lawyers. There are bullet holes in Aristide’s car and blood was on a headlight and the hood.

Haïti-Liberté reports: “A widely diffused video of the confrontation, however, clearly shows the police shooting with leveled weapons. There are no images of Aristide’s retinue firing or even carrying weapons.” (March 20) Aristide was returning home after testifying as a witness in an investigation of a money laundering case.

While president of Haiti, Aristide was forced into exile on Feb. 29, 2004, by U.S. and French mercenaries backed by imperialist interests. Aristide was granted asylum in the Central African Republic two months later until his return to Haiti in March 2011, thanks to worldwide protests inspired by the Haitians’ mass protests in the streets.

Today Haiti remains the poorest country in the Western Hemisphere due to the deepening super-exploitation of its people and its resources mainly by U.S., French and Canadian corporations. These rich capitalist countries are using the ongoing United Nations occupation of troops as a cover for their oppression of the Haitian masses.