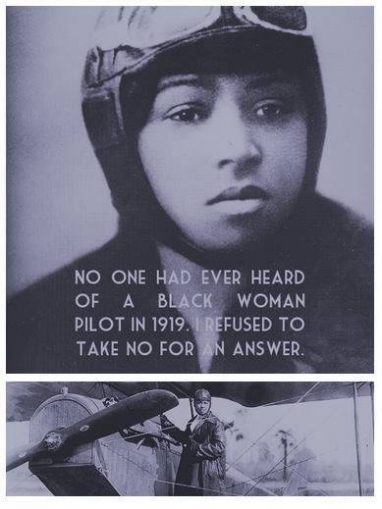 In the field of aviation, Bessie Coleman was a pioneer. In 1921, she was the first African-American woman to obtain a pilot’s license — an international one — and fly a plane.

Coleman was born in 1892 in Atlanta, Texas, to sharecroppers whose parents had been enslaved. She was one of 13 children. The family lived in a one-room cabin. When Coleman was two years old, they moved to Waxahachie, Texas. Several years later, the father, who was also of Native ancestry, left and moved to an Oklahoma reservation to obtain the civil rights that were denied to Blacks and Native peoples in Texas.

In 1915, at age 23, Coleman moved to Chicago, where she began listening to and reading stories of World War I pilots. This sparked her interest in aviation. But because of racial and gender discrimination, no flight school in the U.S. would accept her.

Coleman moved to France where she completed her flight training and earned her pilot’s license. She also gained further flying experience in Holland and Germany. She specialized in stunt flying and parachute jumps and performed ­aerial tricks.

Coleman bought an old plane, and while on a trial flight with the mechanic pilot, the plane dived and Coleman fell out of the cockpit before it crashed. She died April 30, 1926, at age 34, and received recognition as a hero after her death.

Johnson says she was encouraged by a high school teacher to follow her dream of flying. There were no pilots in her life growing up, she says, but for as long as she can remember she’s been fascinated by airplanes. She studied flying while attending Kent State University in Kent, Ohio. Upon graduating, she became a flight instructor for Kent State’s aviation program.

Johnson and Dawn Cook, an African-American First Officer pilot for Delta Airlines, made history on Feb. 26 after organizing a historic flight together. The two women piloted a Delta Airlines flight from Detroit to Las Vegas. Delta celebrated Johnson during Black History Month and honored both women during Women’s History Month.

Johnson encourages young children to consider a career in aviation and has worked with the Detroit Aviation Career Education Academy. She also served as director of the academy. She states, “I feel I have a great sense of responsibility to be a positive role model; that there were so few women in this profession, and too many women who still don’t think of it as a career option.” (Huffington Post, March 2)

Johnson adds, “When I was hired by Northwest Airlines, there were 12 African-American women airline pilots in the country at the major airlines, and I knew all of their names. … One of the most rewarding parts of my career has been sharing my passion for aviation and exposing young people to the opportunities in the field.”