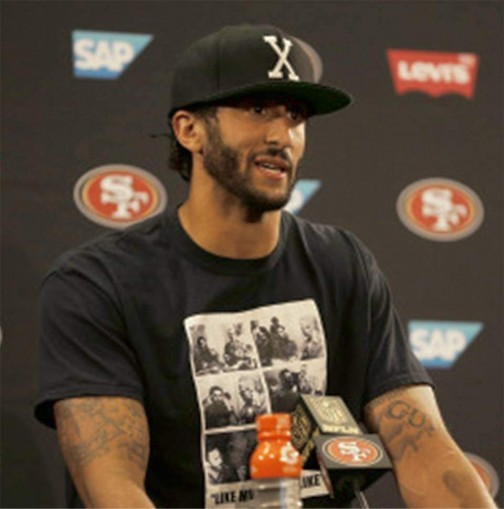 Wearing a shirt showing the 1960 meeting between Fidel Castro, and Malcolm X in Harlem, Colin Kaepernick speaks at press conference on his refusal to stand for the U.S. national anthem, Aug. 26.

Super Bowl LI occurred less than two months ago on Feb. 5 and already there is much talk in the sports world about which quarterbacks are available for the upcoming 2017-18 National Football League season.  One of those quarterbacks is Colin Kaepernick, who recently opted out of his contract with the San Francisco 49ers to become a free agent.

Kaepernick, who is African-American, took a heroic stance last season when he protested during the playing of the national anthem to bring worldwide attention to police brutality and other forms of U.S. racist oppression.  Kaepernick also stated that there was no fundamental difference between Trump and Clinton when it came to the elections.

His action of taking a knee drew both admiration among other athletes and  wrath, especially among NFL owners.  While lesser talented quarterbacks have already been reassigned, Kaepernick hasn’t received one offer as of now. Many prominent people are asking:  Has Kaepernick been labeled a “distraction” because of his political stance or because he was on a poor football team?

It is no secret that some of the NFL owners, many of whom are billionaires, have expressed political hostility toward Kaepernick and view him as a social pariah. Some are outright Trump supporters like Robert Kraft, the owner of the New England Patriots.

Filmmaker Spike Lee, an avid sports fan, stated on his Instagram account after having lunch with Kaepernick, “How Is It That There Are 32 NFL Teams And Kap Is Still A Free Agent? WTF. Smells MAD Fishy To Me, Stinks To The High Heavens… What Crime Has Colin Committed? Look At The QB’s Of All 32 Teams. This Is Some Straight Up Shenanigans, Subterfuge, Skullduggery And BS.” (March 13)

The Undefeated, an online sports ESPN magazine, printed an article from Bomani Jones, a Black ESPN commentator, titled “Colin Kaepernick is called a distraction, but from what?” Jones states in defense of Kaepernick, “But let’s stop pretending teams are that afraid of ‘distractions.’ Don’t forget the New York Giants, one of the ‘classy’ organizations, held on to a kicker [Josh Brown] embroiled in controversy after abusing his wife until the story got too big to ignore. [University of Oklahoma’s] Joe Mixon’s incidence of violence against a woman, captured on video, will hang over the rest of his life, and some team will happily take him at a discounted price in the 2017 NFL draft.” (March 27)

And then there is Johnny Manziel, the former Cleveland Browns quarterback, a known abuser of women as well as drugs and alcohol.  Manziel is now being considered as the backup for the New Orleans Saints lead quarterback, Drew Brees, who openly criticized Kaepernick for his protest.

Kaepernick has stated that he will end his protest for the upcoming season. This, however, does not matter to those influential bosses who neither forgive nor forget athletes like Kaepernick whose actions they know will continue to resonate within growing movements for many years to come.