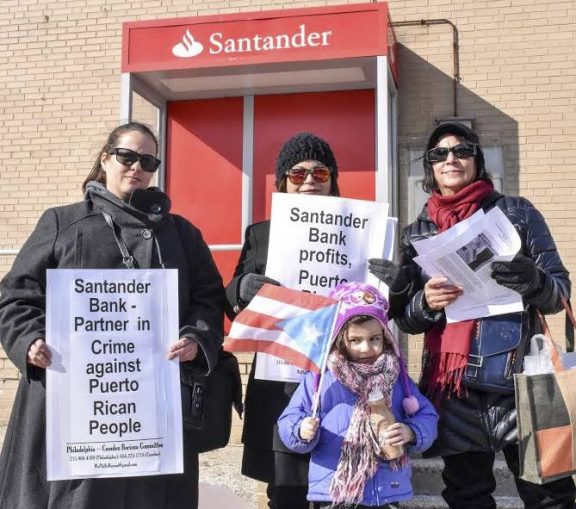 Santander Bank of Spain is deeply implicated in the current Puerto Rican economic crisis. On March 16, several activists from the Philadelphia-Camden Boricua Committee picketed the bank’s Erie Street branch in Philadelphia to hold Santander accountable. Protesters handed out fliers with the following key points on “Why Santander Bank owes reparations to the Puerto Rican people?” (Some points below from the activists’ information sheet were lightly edited.)

Why can’t Puerto Rico fix the problem? As a “territory” of the U.S., Puerto Rico is actually a colony with absolutely no sovereignty in any aspect — political, social, economic or trade. Therefore, it cannot restructure its debt! Everything the Puerto Rican government dictates can be dismissed by the U.S. Congress.

Current situation in Puerto Rico: Puerto Rico is immersed in the worst economic and social crisis in its history. There is a “public” debt of over $73 billion that the government cannot pay because of a stagnant economy. Most of this illegitimate debt has been caused by municipal bonds that ambitious bondholders, like hedge fund firms from Wall Street, bought because the resulting huge profits (sometimes more than 700 percent of original value) were triple tax-exempt. Now these wealthy vultures want to get their promised profits by squeezing the working people of Puerto Rico, where poverty and hunger have increased because of the debt crisis.

On the island, 58 percent of children below the age of 18 live in poverty, and one out of every four people suffers from hunger or food insecurity. An average of 3,000 people — mostly youth — migrate every month to the U.S. because of the lack of employment. The island Puerto Rican population is decreasing while U.S. billionaires move there to take advantage of tax-exempt laws. Puerto Rico is becoming a paradise for the U.S. rich, and the native population will become their servants. (U.S. Census Bureau 2009-10, Department of Agriculture)

To “fix” the lack of payment [of debt] by the Puerto Rican government, the U.S. Congress enacted the PROMESA law to impose a fiscal control board to act as a collection agency to pay bondholders. This board met March 13 to discus a fiscal plan for Puerto Rico. The resulting austerity plan will be the destruction of Puerto Rico and its people. Among the measures are a 20 percent reduction in workdays, a 10 percent reduction in pensions, cuts to the public University of Puerto Rico’s budget, cuts to health care, school closings, etc.

Complicity of banks like Santander: Two of the fiscal control board members were not only executives of Santander Bank, but also presidents of the Development Bank of Puerto Rico, the entity that manages the government’s budget and bonds. These men, Carlos M. Garcia and José Ramón González, “built Santander Securities, the bank’s municipal bond business, which established itself as a leading bond underwriter coinciding with the growth in Puerto Rican public debt. This business brought in substantial fee income for the bank. … GDB [the Government Development Bank of Puerto Rico] became increasingly reliant on questionable financial engineering techniques. … Santander helped the Commonwealth [of Puerto Rico, i.e., the government] issue risky debt deals that relied on controversial features. These generated more fee income for Santander’s underwriting business.” (tinyurl.com/lx7kq9s)

Puerto Rico’s economy has been developed to satisfy U.S. corporations’ interests. The only status that can help Puerto Rico become sovereign and build its future on behalf of its people is as an independent republic. That is why the U.S. has always persecuted and repressed the people who defended independence for Puerto Rico and [tried to] make people believe that Puerto Rico can survive only with the “protection” of the U.S. But facts are there to see: After a century of U.S. intervention and occupation, Puerto Rico is worse off than ever and its people are in deep poverty!