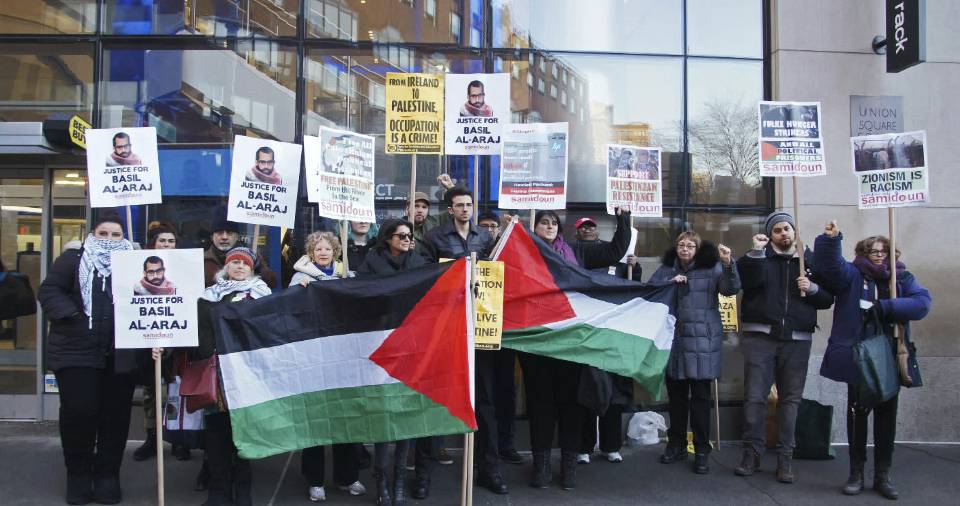 Samidoun protest at a New York Best Buy on March 17.

Basil, 31 years old, returned the invaders’ fire and fended them off for two hours, reportedly succumbing to their gunfire and rockets only after exhausting his supply of ammunition.

Within hours of his death, thousands of Palestinians took to the streets of Gaza, Ramallah, el-Bireh and Dheisheh refugee camp near Bethlehem in Palestine; Haifa in Israel; and Nahr el-Bared refugee camp in Lebanon.

Meanwhile, Israel played a grisly game with Basil’s body, promising to return it to his grieving family on March 10, then refusing to do so for another week. Israel sought to impose restrictions on the time and location of his funeral as conditions for releasing his remains.

Only late in the afternoon of March 17 did Israel finally deliver its hostage, by then dead more than 11 days, for a delayed but momentous burial.

Thousands of Palestinian mourners descended on Basil’s hometown of al-Walaja near Bethlehem. Meanwhile, Samidoun: Palestinian Prisoner Solidarity Network held a rally outside the Best Buy in Manhattan’s Union Square to remember Basil and protest the store’s sale of products made by Hewlett Packard, a major supplier of the Israeli occupation forces who killed him.

The violent deaths of Palestinians at Israeli hands, while each is tragic, are not unusual. In 2016 alone, individual Israelis or — much more commonly — agents of the Israeli state killed at least 109 Palestinians, most of them men younger than Basil. (maannews.com)

But among the untold thousands of martyrs remembered over nearly a century of Palestinian struggle, several factors set Basil apart as an inspiration for mobilization.

While resistance fighters often keep low profiles out of necessity, Basil’s background in popular campaigns — including the Boycott, Divestment and Sanctions movement and the “Palestinian Freedom Rides” protest of settler buses in 2011, as well as his prolific writing and commentary — made him well-known among Palestinian and international activists alike.

His final moments, after fighting back for hours against overwhelming odds, inspired many, due in no small part to his own words of seeming or actual ­anticipation.

“The biggest insult against a martyr would be to say that he was obedient, submissive and polite in the face of his killer,” Basil once said (electronicintifada.net, March 14). He asked in his will, “Is there anything which is more eloquent and clearer than a martyr’s deed?” (maannews.com, March 6)

Basil’s earlier imprisonment and torture by the Palestinian Authority, which led inevitably to his pursuit and killing by Israel, made his death a potent catalyst for outrage.

Starting between late March and early April 2016, Basil and five other young Palestinian men were arrested by the PA security forces and imprisoned in its ­Beitunia jail.

Palestinian Authority President Mahmoud Abbas boasted of the arrests, telling Der Spiegel, “Just a couple of days ago, three young men were tracked down and arrested. They were planning an attack. In this context, our security cooperation with Israel is functioning well.” (April 18)

Amid Palestinian protests and reports of their torture, the six launched a hunger strike on Aug. 28, forcing the PA to release them 10 days later.

‘Oslo regime does not represent us’

Israeli occupation forces quickly arrested four of them — Seif al-Idrissi, Mohammed al-Salameen, Mohammed Harb and Haithem Siyaj — ordering them into “administrative detention” without charge or trial under terms similar to their PA incarceration.

The PA continued to press its own charges of unlicensed possession of weapons for resistance operations against all six, including Ali Dar al-Sheikh, the only one of the group not currently imprisoned, and Basil despite his death.

As demonstrators gathered outside the PA court in Ramallah on March 12, BDS National Committee member Omar Assaf said, “We are protesting against the Palestinian Authority which imprisoned Basil in the past and today wants to judge him.” ­(aljazeera.com, ­March 12)

The PA court finally dropped Basil’s charge later that day after a formal presentation of his death certificate. But it refused to do the same for the four in Israeli prisons, reasoning they might be released before the court reconvenes on April 30.

The PA attacks infuriated Palestinians across the political spectrum, sparking widespread calls for Abbas’ resignation and an end to the PA’s “security coordination” with Israel.

Khalida Jarrar, a leader of the Popular Front for the Liberation of Palestine, announced that the party would boycott West Bank municipal elections in protest. (pflp.ps, March 12) Hamas spokesperson Hazem Qassem called the attacks “a national crime that entails accountability.” (hamas.ps, March 15)

A global network of Palestinian activists called for demonstrations against “security coordination” on April 17, the annual Palestinian Prisoners’ Day and 40 days after Basil’s death.

“The Oslo regime does not represent us,” their statement read. “Now is the time for us to come together and rebuild our collective struggle for the liberation of all of Palestine.” (tinyurl.com/lyo2bh3)