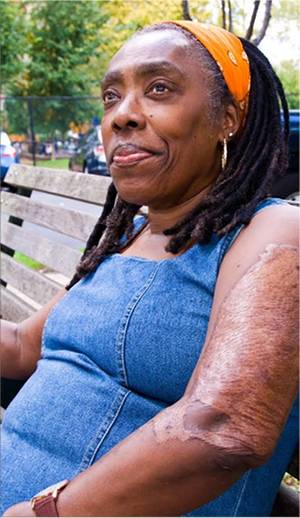 Former U.S. political prisoner Ramona Africa is the Minister of Communication for the MOVE Organization and a Philadelphia-based organizer with the International Concerned Family and Friends of Mumia Abu-Jamal.  She is also the only living survivor of the 1985 MOVE bombing, when the FBI and Philadelphia police dropped two C-4 bombs on her organization’s home, killing 11 people.  Read along as we discuss the case of Mumia Abu-Jamal, the conditions of U.S. prisons and Donald Trump.

Lamont Lilly: Ramona, thank you for sharing your time with me today.  Current U.S. political prisoner Mumia Abu-Jamal is an international symbol of people’s resistance. His writing and journalism have traveled worldwide.  Not only was he a founding member of the Philadelphia chapter of the Black Panther Party, Mumia was also an early supporter of the MOVE organization. (See “We Want Freedom:  A Life in the Black Panther Party,” by Mumia Abu-Jamal)  What does Mumia mean to MOVE?  What does he mean to the city of Philadelphia?

Ramona Africa: Mumia began his journalistic career writing for the Black Panther Party newspaper at 14 or 15 years old. When it came to issues of the people, Mumia always covered these issues of concern. When he heard about the MOVE organization and began covering our demonstrations and court cases, Mumia would actually come to the prison and interview MOVE members right there.

Mumia’s the only journalist that consistently and accurately reported on MOVE — the truth, I mean. And because he was telling the truth about MOVE and exposing what the system was doing, not only to MOVE, but to poor people, people of color, and even poor whites, he earned the scorn of the Philadelphia police department and [Mayor] Frank Rizzo.  (See tinyurl.com/ly3w5b6) He earned the scorn of city officials. He lost jobs.

Mumia used to work for National Public Radio. He worked for a local radio station here in Philadelphia called WBAF. He worked for the Philadelphia Tribune, the first Black publication in this country, I believe. But he ended up becoming a freelance journalist because the people he was working for were trying to make him compromise and tell the system’s story, and not the truth.  Mumia would not compromise. He refused. He ended up becoming a freelance journalist and driving a cab part time to supplement his income and take care of his family. That’s how he happened to be at 13th and Locust streets on Dec. 9, 1981.

LL: What happened on Dec. 9, 1981?  That particular evening is what led to Mumia’s incarceration. Can you give us some details on that?

RA:  Mumia was working at night, and on this particular night he was letting a fare off at 13th and Locust streets. He happened to see police lights circling. Being a journalist, he wanted to see what was going on. He went over to where the police vehicle was and saw this white cop beating this Black man. He went over a little closer to see about the brother, and to see if he could stop the cop from beating this man.

Mumia then realized that the man who was being beaten by the cop was his own brother, Billy. So, Mumia tried to intervene and ended up being shot by the cop. Shortly after that, someone shot the cop. Of course, they’re saying that Mumia did it — but the conflicts here are unquestionable.

They said Officer Daniel Faulkner was shot with a .44-caliber gun.  That’s what they said. Mumia was licensed to carry a gun because he had been robbed twice while driving his cab. He was driving the night shift, but Mumia’s gun was a .38-caliber. Witnesses said that the person who shot the cop ran down the street and down this alleyway. Mumia was shot sitting on the curb. Shot!  He didn’t run anywhere. But when they realized who they had — as in Mumia Abu-Jamal — who was right there in their grasp, they didn’t look for anything else and didn’t want to hear anything else.  This was their opportunity to get Mumia Abu-Jamal [former Black Panther], which the Philadelphia police department wanted to do for a long time.

People should know that a man named Arnold Beverly came forward and confessed to shooting Daniel Faulkner. He gave a whole résumé about other cops who had been killed and everything. The courts said he wasn’t credible. But how could they know that? They never let him come into court and testify. They said he “wasn’t credible” and never even entertained his confession.

LL:  Mumia has been in prison for over three decades now, working on four, most of his time being in solitary confinement and on death row.  They’ve tried to break him, but he continues to find strength and keep writing and teaching, even while incarcerated. Right now, Mumia is sick with hepatitis C. There has been a national movement to get Mumia the medicine that would cure it, but the state of Pennsylvania is not allowing that.  What the hell is going on?

RA: Well, there are two attorneys fighting hard on this, Robert Boyle and Bret Grote, who have been fighting to get Mumia treated. (tinyurl.com/lmy4z49)  There is a cure for hepatitis C — and that’s what they are pushing for.  It’s a drug called Harvoni.  The thing is, it’s a two-prong fight. Harvoni in India and Africa costs like $4 a pill, $7 a pill. In the United States, it’s like $1,000 for one pill. The cure is a 90-day treatment.  You have to take it every day for 90 days. It is a proven cure, not just a “treatment.”  This is the cure for hepatitis C.

One prong of this fight is the pharmaceutical companies. How can you dare charge people $1,000 a pill ($90,000 basically for the cure)? Yet, in other countries, much poorer countries, they’re charging people $4 and $7 for this pill. I’m not saying that they should raise the price of their pills. I’m saying that these pharmaceutical companies here in the U.S. should not be charging $1,000 for it over here.

LL: You mentioned a “two-prong” fight.  What is the second problem that you all are fighting?

RA: The other prong is what you just spoke on — the institution. Mumia is so well-known. The situation with him gets a lot of attention. What the institution is saying is that if they give the treatment to Mumia, then they will have to give it to the other 6,000 to 7,000 inmates in the state of Pennsylvania who also have hepatitis C. And yes, yes, you should!  You took custody of these people! You took responsibility for them! So yes, if they’re sick, of course you’re supposed to treat them! I mean, come on.

LL: I heard that the prison where Mumia Abu-Jamal is being detained doesn’t have clean drinking water. Is that true?  You also have family members in that prison. What have you heard about this?

Where my brother Mike Africa is being incarcerated — at Graterford Prison here in Pennsylvania — the water is really bad there, too. He convinced the “Lifers Association” to sell bottled water. It’s one of their fundraisers. But he pays close to $20 for a case of water. That’s ridiculous. He’s spending $60 a month for water.

They were telling the guards straight up: Don’t drink the water.  Bring your own.  My brother Mike works in the kitchen there, and he was telling me that in the guards’ dining room they have filters on the water spigots, but not for the inmates, of course.  That is the state of what’s happening in this country, not just with Mumia, but in prisons all over this country. (tinyurl.com/mlmapdu)

I don’t know what it’s going to take for people to really — and I mean really! — get the message that this system and those running it are not operating in our interests, in the interests of the people.  Their only interest is money and keeping this system going.  I don’t know when people are really going to get that, but we can’t look to this system for anything.

LL: Speaking of “the system” and those who are running it, what are your thoughts on the election of Donald Trump?

RA:   I’m not a Hillary Clinton fan at all, but the bottom line is they told people to their faces: “Your vote doesn’t count.”  You don’t elect the president.  They say that Hillary had over 2 million more votes than Donald Trump.  (tinyurl.com/zkayrtu) So, why he is now the president?  Because this mystical electoral college selects the president.  That’s why.  It has nothing to do with who “the people” elected.  They tell you that to your face, and you’re still going to believe in this system?  You’re still going to hallucinate that you can get something out if this?

LL: We wish you and Brother Mumia Abu-Jamal much strength and continued resistance.  We honor your many sacrifices for the people.  Thank you for your time, Ramona!

Lamont Lilly was the 2016 Workers World Party U.S. vice presidential candidate. In 2015, he was a U.S. delegate at the International Forum for Justice in Palestine in Beirut, Lebanon.  He is also an activist and organizer in the Black Lives Matter movement.