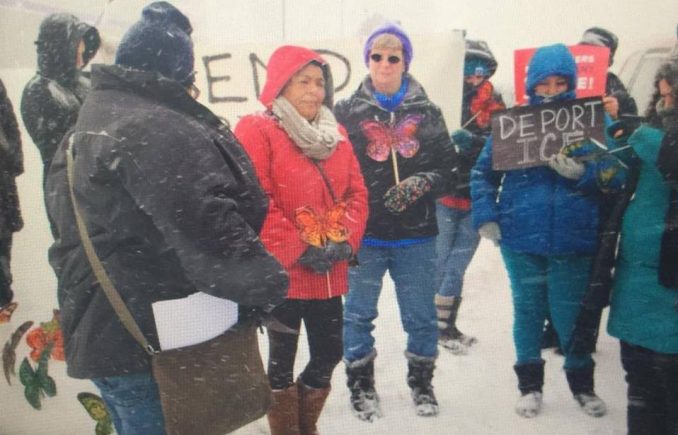 In minus-degree wind chill and blowing snow, dedicated pro-migrant community members came out on March 15 in Syracuse and in Batavia, N.Y., to support Dolores Bustamente, who was recently detained by U.S. Immigration and Customs Enforcement and threatened with deportation. Bustamente faced a court hearing that day.

When Bustamente came to the U.S. with her daughter, fleeing 13 years of domestic violence, she became a farmworker to support herself. She became a board member of the Workers’ Center of Central New York (WC-CNY), Las Mujeres Divinas of Western New York and the national Alianza Nacional de Campesinas, the latter organizations especially supporting women farmworkers’ empowerment.

When New York state police turned Bustamente over to immigration authorities for a minor traffic violation in 2014, she became a leader in a successful campaign to stop New York state troopers from racially profiling and questioning a person about their citizenship.

At the Syracuse rally, Nikeeta Slade of WC-CNY said, “Driving to work, driving your children to school, or driving yourself or a loved one to a hospital, should never end with the possibility of being separated from your family or community.” The WC-CNY has been doing frontline work to legalize drivers’ licenses for all, regardless of immigration status, through the campaign Green Light NY: Driving Together.

WC-CNY continues to fight for other detained migrant workers including José Coyote, who was recently detained and jailed in the Buffalo Federal Detention Center in Batavia although his case had been administratively closed in September. Like Bustamente, Coyote is a leader in his community and at the forefront of the struggle for immigrants’ and workers’ rights.

Rebecca Fuentes of the WC-CNY said: “We want to send a strong message that when this administration comes for one of our friends and neighbors, we are united to protect and defend them.”

By the end of the day, Bustamente had some months’ reprieve through a new hearing set for May. She issued a public message to her daughter: “Do not let what is happening now stop you. On the contrary, may it make you stronger so that you can continue fighting for your dreams.”