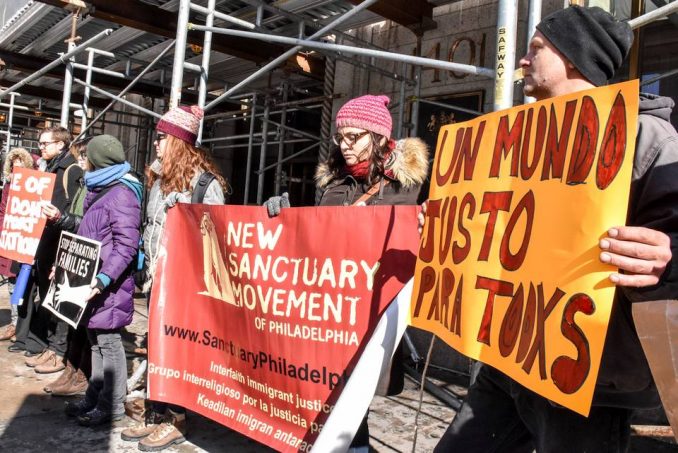 Marcos, a migrant worker living in Philadelphia, was stolen from his family and community on March 16.

Marcos reported for his mandatory parole hearing with full knowledge that two of his friends had been abducted by Immigration, Customs and Enforcement the previous week after their probation hearings. He contacted the New Sanctuary Movement, which put out a call for an action in support of the trial he faced. About two dozen people were able to be with him, offering words and prayers of encouragement, as he entered the building.

Security in the building treated NSM members harshly, preventing them from waiting in the lobby for Marcos and eventually ejecting them from the building. They did not even allow a member to stay with him to act as an interpreter.

While some demonstrators remained in front of the building to raise awareness of what was happening, part of the group gathered around the back exit in preparation for the possibility that Marcos would be “discreetly” removed and sent to an ICE detention center.

About an hour after he entered the building, I saw Marcos briefly once again. We made eye contact as he sat handcuffed in the back of an unmarked, midnight blue SUV. The drivers smiled and waved before driving away with Marcos in custody.

The practice of seizing migrants in Philadelphia is a very visible routine, in contrast with claims that the city is a “sanctuary” for immigrants. Mayor Jim Kenney promotes the image of Philadelphia protecting the immigrant community by not forcing city institutions to cooperate with ICE. This image has contributed to Kenney’s support and acceptance as mayor, as well as to the success of his 2015 election campaign, but it is notably void of any substance.

Although the city’s policies limit some exchange of information from its criminal system to ICE, in practice Philadelphia still cooperates with ICE. The Adult Probation and Parole Department had nearly 50,000 people in its system as of March 2009. ICE has such an entwined relationship with this department, it is able to regularly keep transport vehicles at parole hearings and detain people on site.

This departure of Kenney’s proclaimed values from material reality is a common trend. The Philly Coalition for REAL Justice has been pursuing an ongoing campaign to end the Philadelphia Police Department’s stop-and-frisk policy. Mayor Kenney has admitted the practice is unconstitutional, denounced it publicly and gathered support for his campaign by promising to end it.

However, after all these promises and over a year in office, Kenney has yet to introduce any additional form of accountability or legislation to end stop-and-frisk. Police officers have continued harassing Black and Brown communities unhindered by Kenney’s empty words. Kenney’s two-faced treatment of the city’s “sanctuary” status is more of the same.

The overlap of conditions facing Black, Brown and migrant communities is no coincidence. The struggles of different communities in the working class have similar patterns because our enemy is shared. The only way we will truly end harassment and detainment from cops and ICE is through solidarity and principled unity. The only way we can attain true victories for our communities is with the support of our comrades — not crumbs and empty promises from politicians.