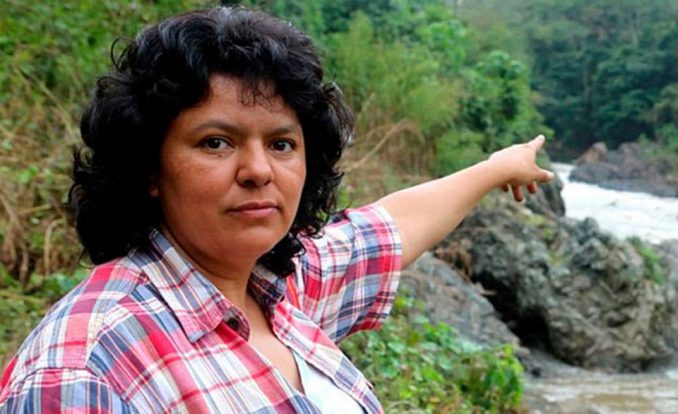 Honduran Indigenous leader and environmental activist Berta Cáceres was shot to death a year ago at her home in a gated community, supposedly under Honduran government protection.

An investigation by the British newspaper The Guardian revealed Feb. 28 that the death of Cáceres, winner of the prestigious Goldman Environmental Prize in 2015, was “an extrajudicial killing planned by military intelligence specialists linked to the country’s U.S.-trained special forces.”

Cáceres’ murder caused such an outcry within Honduras and internationally that the Honduran government was forced to put eight men on trial for her murder. The Guardian’s investigation revealed that among the accused were:

Major Mariano Díaz, chief of Honduran army intelligence at the time of the murder, on track to be promoted to lieutenant colonel. He attended cadet leadership courses at Ft. Benning, Ga., in 1997, and a counterterrorism course at the Inter-American Air Forces Academy at Lackland AFB, Texas, in 2005.

Retired Lt. Douglas Giovanny Bustillo, who joined the military on the same day as Díaz and had been in constant ­contact with him. Bustillo attended logistics and artillery courses at the School of the Americas at Ft. Benning, which trained hundreds of Latin American officers who later committed ­human rights ­abuses. Bustillo was also head of Desa corporate security between 2013 and 2015.

Berta Cáceres had reported 33 death threats linked to her campaign against the Desa dam, including many from Desa management. A former Honduran soldier reported that Cáceres was on a hit list that was passed on to U.S.-trained military units.

Because of these threats, the Honduran government set up a guard station at the gate of Cáceres’ home, but it was left empty on the night of the murder.

A legal source told the Guardian reporter: “The murder of Berta Cáceres has all the characteristics of a well-planned operation designed by military intelligence, where it is absolutely normal to contract civilians as assassins. It is inconceivable that someone with her high profile, whose campaign had made her a problem for the state, could be murdered without at least implicit authorization of military high command.”

In 2009, the Honduran military overthrew the elected government in Honduras, with Washington’s tacit support. The U.S. State Department, at the time headed by Hillary Clinton, violated Organization of American States rules by doing nothing to oppose the military junta.

Since then, military death squads have roamed the country, murdering tens of thousands, particularly Indigenous people, at the behest of mining companies who need dams to power their operations. The U.S. government has proclaimed its opposition to these murders, but has not stopped sending funds to the Honduran military, amounting to $18 million a year.

The Trump regime has made its position quite clear. Homeland Security Chief John Kelly has proposed tearing Honduran and other Central American refugee children from their mother’s arms if they somehow manage to reach the U.S. border, fleeing death squads. (washingtonpost.com, March 7)