For nearly three decades prior to 2008, Oklahoma averaged only two earthquakes a year of magnitude 2.7 or higher. Then the state experienced a boom in hydraulic fracturing, or f 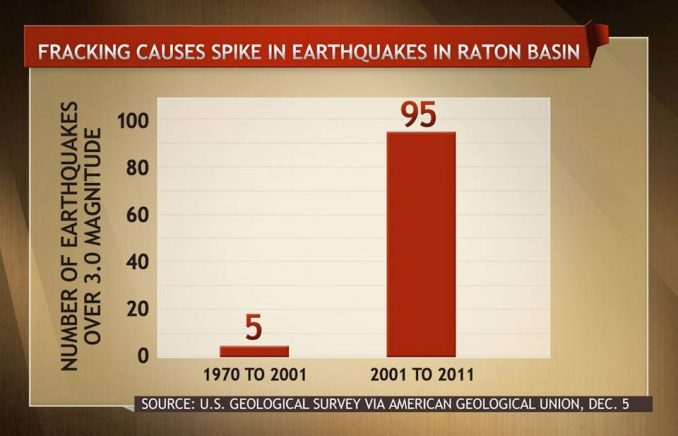 The skyrocketing number of earthquakes in the Raton Basin from Colorado to New Mexico.

racking. By 2014 the annual number of reported earthquakes had spiked to around 2,500.

In 2015 earthquakes in Oklahoma nearly doubled to 4,000, including 857 with a magnitude 3.0 or higher — amounting to more than in the rest of the lower 48 states combined. The quakes, more than three a day, were linked to the underground disposal of wastewater, a byproduct of fracking for oil and gas.

After Oklahoma restricted the number and volume of wastewater injection wells, the number of earthquakes dropped to 2,500 in 2016. However, in September 2016 a 5.8-magnitude earthquake struck nine miles from the center of the Pawnee Nation in north-central Oklahoma. It caused extensive damage to buildings in the town of Pawnee, which has about 2,200 residents.

The Oklahoma Corporation Commission responded by shutting down 37 injection wells within a 725-square-mile radius of the epicenter. The Pawnee Nation responded March 4 by filing a lawsuit accusing 27 oil and gas companies with causing the earthquakes.

The Indigenous tribe is seeking compensation for damage to hundreds of homes and public property, including the former Pawnee Nation Indian School, a nearly 100-year-old building listed in the National Register of Historic Places. The lawsuit is also seeking punitive damages.

While other lawsuits have been filed against the gas and oil industry for earthquake-related damage in Oklahoma, what makes this case unique is that it will be heard in the tribe’s district court. The jury will be selected from 3,200 members of the Pawnee Nation.

If the oil and gas company defendants appeal the jury’s decision, a five-member tribal Supreme Court gets to hear the case, and their decision will be final. The tribal court’s judgment will then go to a state district court for enforcement.

There is no appeal of a tribal supreme court ruling. In 2016 the U.S. Supreme Court upheld the authority of Native American courts to judge complaints against nontribal entities.

Pawnee Nation Executive Director Andrew Knife Chief said, “We are a sovereign nation and we have the rule of law here. We are using our tribal laws, our tribal processes to hold these guys accountable.” (nytimes.com, March 4)

Knife Chief noted that the quake left extensive cracks, bowed ceilings and sagging roofs in all of the impacted historic buildings. The tribe wants the oil and gas companies to be held accountable for the damage caused by their operations. Cummings Oil Company of Oklahoma City and Eagle Road Oil of Tulsa are among the companies cited. Both were operating wastewater injection wells less than 10 miles from the epicenter of the September quake.

Millions at risk from ‘induced earthquakes’

In 1957 the U.S. Army Corp of Engineers established a link between increased seismic activity and injection wells after a Colorado 5.5-magnitude earthquake was attributed to the U.S. Army’s disposal of toxic fluids into a 12,000-foot well.

Yet 60 years later, the wastewater from fracking continues to be pumped into salty aquifers, deemed unsuitable sources of drinking water. The fluid pressure from pumping massive volumes of wastewater into these aquifers gets transmitted into underground rock formations, where it acts to lubricate ancient faults, causing them to shift over time. (arstechnica.com, Dec. 20)

As of 2011, there were over 800,000 underground injection wells across the U.S., with over 30,000 strictly authorized for disposing of wastewater from oil and gas operations. With the rapid expansion of drilling in Pennsylvania, Ohio and other states, these numbers are no doubt higher today, involving billions of gallons of highly salty and toxic wastewater.

In March 2016 a U.S. Geological Survey concluded that “induced earthquakes” from human activity like fracking put around 8 million people in Oklahoma, Kansas, Colorado, New Mexico, Texas and Arkansas at “the same risk of earthquakes as people in quake-prone California.” However, unlike California, buildings in these states were not designed with seismic activity in mind. (ibtimes.com, Dec. 20)

Because of increased earthquake activity, officials in Oklahoma finally established “guidelines” on fracking and the use of injection wells in 2015, temporarily closing several in areas with the most earthquake activity. However, the state took no legal action to hold the oil and gas companies responsible for damage from the quakes.

Not only do the Pawnee have tribal laws on their side, they have science as well. However, the oil and gas companies have climate-change denier Scott Pruitt on theirs.

Pruitt, Donald Trump’s choice to head the Environmental Protection Agency, recently caused an uproar when he denied that human activity was a major contributor to climate change, openly contradicting scientific consensus on the issue.

As Oklahoma’s former attorney general, Pruitt was responsible for protecting the people of that state. It was during Pruitt’s tenure that Oklahoma developed the human-made earthquake epidemic.

Even after the U.S. Geological Survey established the link between injection wells and earthquakes averaging three a day, Pruitt’s response to the crisis was to dismantle the environmental protection unit. Pruitt was very proactive on lawsuits favoring the oil and gas industry, while ignoring the industry-induced earthquakes and their impact on Oklahoma communities.

Harold Hamm, head of Pruitt’s reelection campaign in 2014, argued that wastewater injections did not cause the earthquakes. An oil billionaire, Hamm made his fortune from fracking shale deposits in North Dakota. He served as energy advisor to Trump during his election campaign and is firmly committed to doing away with any regulation of the oil and gas industry.

Now his protégée Scott Pruitt is busy filling high-level EPA positions with fossil fuel industry lobbyists. The Trump administration and the EPA are talking about eliminating the EPA’s Office of Environmental Justice, which was established to protect communities of color, Indigenous lands and poor communities in general from the impact of environmental racism.

In this context, the Pawnee Nation’s lawsuit against the energy industry, to be tried in their own sovereign courts, holds out promise to all people in Oklahoma and beyond who are fighting for environmental justice.