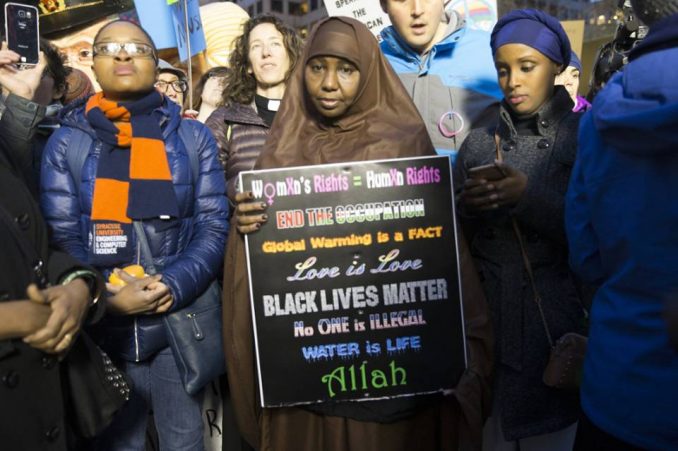 A huge Black Lives Matter march of around 2,000 people took place in Seattle on the evening of March 4. The youthful, multinational crowd overflowed the plaza at Seattle Community College.

Some in the march carried signs saying “Justice for Ben Keita,” an 18-year-old Black Muslim student in Lake Stevens, Wash. His body was found hanging from a tree in the woods on Jan. 9. The medical examiner and the cops ruled it a suicide, but his parents are skeptical since Keita was upbeat and ambitious about going to college.

The police investigation into Keita’s death has been very slow, and the medical examiner has now called the cause of his death to be undetermined. The state Council on American-Islamic Relations has called for a federal investigation into this apparent lynching, especially due to the rise of hate crimes permitted and enabled by the regime of U.S. President Donald Trump.

The demonstration marched to the site of a youth jail, where a long street meeting was held. Black Lives Matter leaders denounced the $210 million plan to expand and remodel the jail, including the expansion of a massive new youth courthouse. The complex, which is right in the Black community, jails a disproportionately high percentage of people of color.

Only days before, forces opposed to the youth jail were double-crossed by the liberal Seattle city administration. The city had promised opponents of the jail the right to appeal the construction permit, but that right was turned down in the permit hearing.

The protesters also marched to the Umoja Peace Center in Central District, a Black community. Omari Tahir-Garrett, a longtime activist and resident of the Peace Center, had recently been jailed for a week and evicted from the property, where he has lived for many years.

Tahir-Garrett spoke to the marchers from his front porch about the violence of his arrest and eviction, which was done illegally in the interests of new investors in the property. The Peace Center, which houses the homeless, has attracted interest as a center of opposition to the gentrification of the community over many years.

The demonstration then marched one block further to Uncle Ike’s, a high-end, high volume, white-owned marijuana shop. Demonstration leaders pointed out that Uncle Ike’s flaunts its ability to peddle marijuana as the “face of capitalism” while huge numbers of Black people remain in prison for selling marijuana nearby before the drug was legalized.

The demonstration remained in front of Uncle Ike’s until all the customers had left and the parking lot was empty.