American Federation of State, County and Municipal Employees Council 31, representing almost 40,000 state employees in Illinois, scored a small victory March 3 when an appellate court agreed to hear testimony about whether an impasse should be declared for negotiations between the union and Gov. Bruce Rauner’s administration.

Contract negotiations have been at a standstill since January 2016, when Rauner left the bargaining table. (AFSCME31.org, March 3) Rather than negotiate in good faith, Rauner went over the workers’ heads and had the state labor board “declare an impasse,” meaning the state would be given power to unilaterally impose its contract terms. For Illinois state workers, who are majority women and people of color, this would mean a four-year wage freeze and more than a 100 percent increase in health plan premiums, amounting to $10,000 annually. (chicago.suntimes.com, March 3)

Not limiting their fightback to the courtroom, the workers voted 81 percent for a strike, if necessary. This is the first such authorization by state workers in Illinois history. (afscme31.org, Feb. 23)

The union announced plans to rally outside a Rauner Republican fundraiser on March 30 to demand the governor return to the bargaining table. For more information on the rally, go to tinyurl.com/ztowxuz. 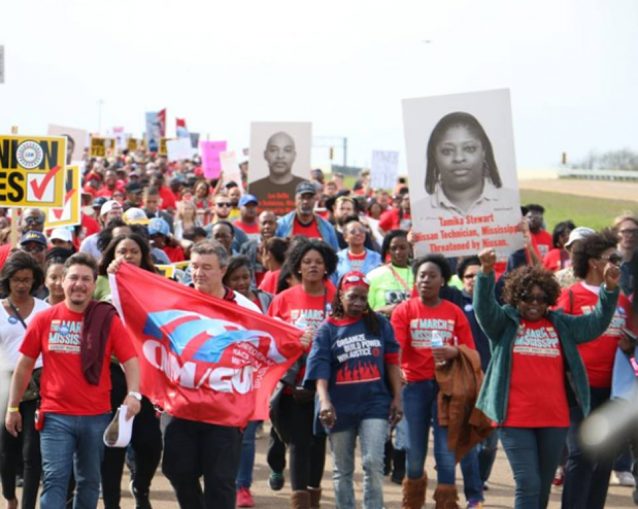 Thousands of workers and their supporters marched to the Nissan plant in Canton, Miss., on March 4 to demand the company recognize the workers’ civil and labor rights to join the United Auto Workers without threats or intimidation. At the rally, estimated at more than 4,000, actor Danny Glover, NAACP President William Brooks, Jackson Mayor Chokwe Antar Lumumba and Sen. Bernie Sanders supported what has become a national labor issue. Not only have unsafe working conditions and racist discrimination been exposed, but the nearly 5,000 Nissan auto workers — 80 percent African American — are determined to stop the mistreatment of temporary workers and gain a secure retirement.

Two days before the march, Nissan revealed its blatant anti-union bias. In violation of federal labor law, a security guard stopped workers, who were outside a plant gate, from handing out union literature and cards authorizing a union vote. This unfair labor practice charge joins several others filed with the National Labor Rights Board in a very long union campaign. (AP, March 3)

To sign a petition supporting the workers’ right to unionize, visit drivingchangeatnissan.org.

Graduate students who teach classes or do research in six academic departments at Yale University voted Feb. 23 to join UNITE HERE Local 33. However, the vote in two other departments was too close to call, and one department voted not to join.

After the Aug. 23 NLRB ruling that student teachers at private universities could join unions, grad students at Columbia and Harvard voted for union representation, while those at Yale began to organize. Then Yale hired the traditionally anti-union law firm Proskauer Rose to defeat the union’s voting strategy.

One union supporter told the Yale Daily News that a recent communitywide email against unionization from Lynn Cooley, dean of the Graduate School of Arts and Sciences, helped: “Cooley’s email was a welcome sign of desperation.” Yale has fought grad student unionizing since the Graduate Employees and Students Organization — the precursor to Local 33 — was founded in the 1990s. (March 23)

Although candidate Trump vowed to create millions of jobs for unemployed or underemployed workers, President Trump is doing exactly the opposite. His viciously anti-worker agenda promotes so-called “right-to-work” (for less) laws designed to benefit bosses. Kentucky rammed through a RTW law in January, followed by Missouri and Iowa in February. A national RTW law is threatened.

Workers need to know the truth about RTW laws; they are the exact opposite of their title. Research conducted by the Economic Policy Institute shows both union and nonunion workers in RTW states have lower wages and fewer benefits, on average, than comparable workers in other states. EPI reports that wages in RTW states average 3.1 percent lower than those in non-RTW states, or $1,558 less for the typical full-time, full-year worker. To sign a petition to congress and state legislatures that exposes RTW, go to tinyurl.com/hnp44cq.