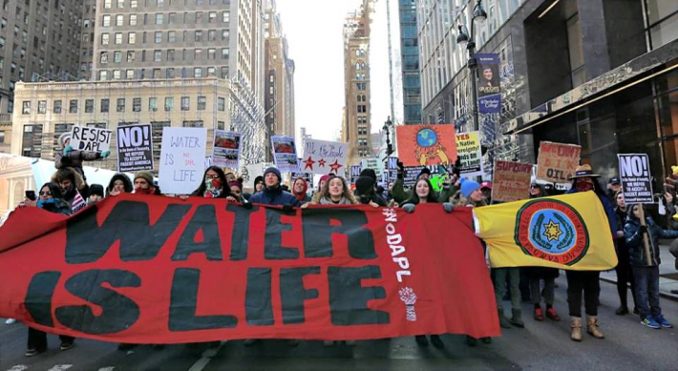 Some 1,000 people defied a huge police presence to march to Trump Tower on March 4 to protest government actions clearing protesters at Standing Rock, N.D., and pushing through the oil pipeline that threatens water and Indigenous lands.

One of those speaking, Stephanie Hedgecoke, of Tsalagi, Huron and Creek descent, and a regular contributor to Workers World newspaper, told of the struggle at Standing Rock for Indigenous sovereignty and defense of the environment.

With no reason or pretext, cops arrested three people on the march, including two leading Black activists in the People’s Power Assembly. Charged with disorderly conduct, they were out after a few hours.

March 4 pro-Trump events took place all around the country, with the one at Trump Tower much smaller than the protest in solidarity with Standing Rock. New Jersey college student Heather Graham initiated the Standing Rock protest in New York on social media and asked the PPA to help organize the march after thousands of people indicated they might be coming.